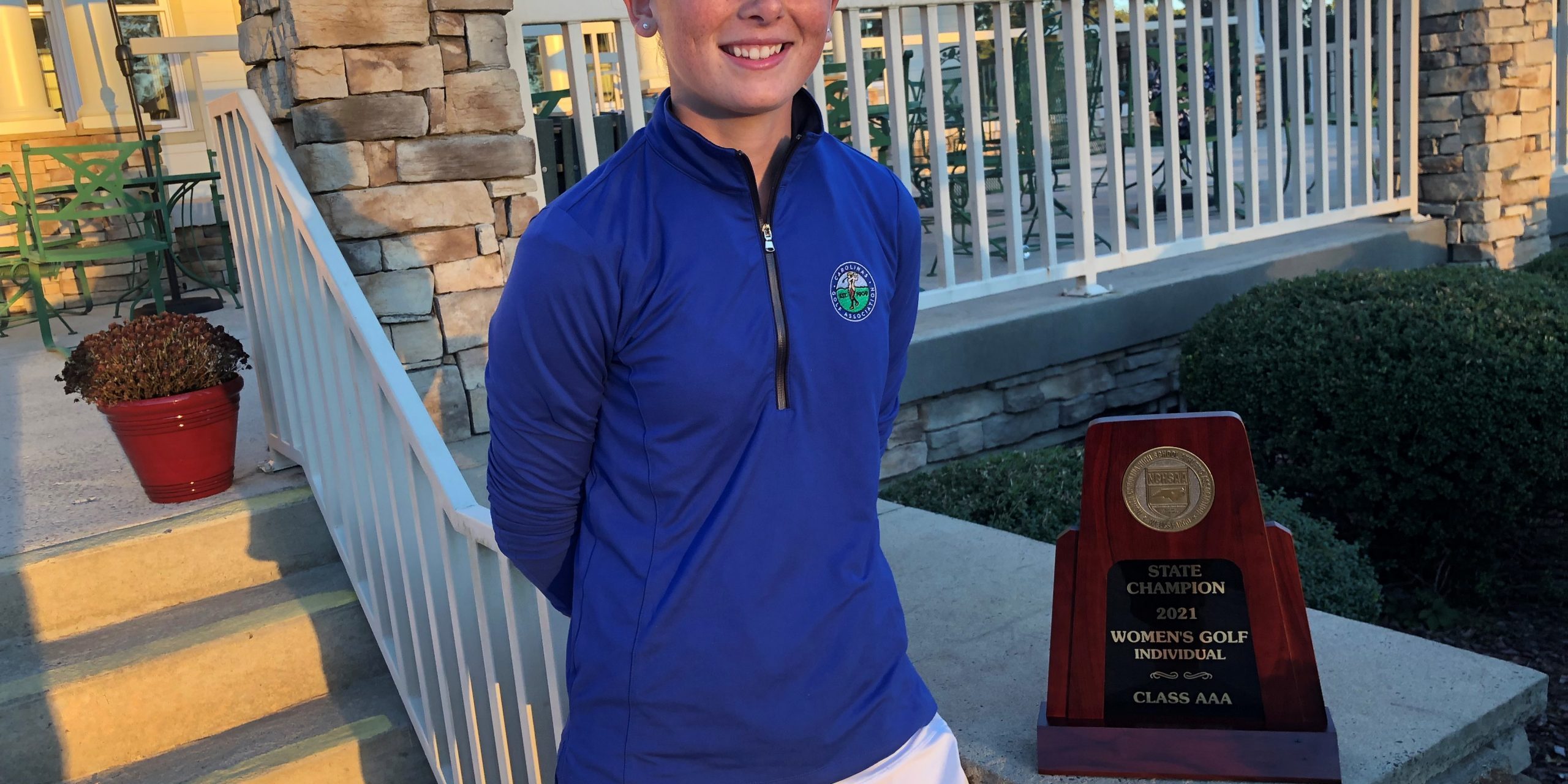 Emily Mathews shows no signs of slowing down in the women’s high school 3-A state golf championship.

The Eastern Alamance junior won her second 3-A title in a span of five months with a victory at Foxfire Resort & Golf outside of Pinehurst. She won the first one in May at nearby Beacon Ridge when the 2020 season was postponed until spring due to COVID-19.

“It’s an honor,” Mathews said. “To do it for the second season in a row is really cool. High school golf is such a great experience and the people surrounding me are absolutely amazing.”

The wins come on the heels of Mathews finishing as the runner-up in 2019 when she was just a freshman.

“I definitely wanted to go out there and win freshman year but I came up a little short,” she said. “So it’s good redemption the last two years.”

Mathews shot a 3-under par 69, the only subpar round in the tournament, on the final day at Foxfire to win by an amazing 12 strokes.

The 5,266-yard course played short for the long-hitting Mathews, who is the sixth ranked North Carolina junior.

She rarely used a driver off the tee, sticking to irons and hybrids to put the ball in position. The tournament was played on the Grey course at Foxfire, featuring more elevation changes than its Red course, which also has been used for the 3-A tournament.

“This course can get tricky if you let it,” Mathews said. “There are a couple of holes where you could pull driver but it’s not the smartest play. Laying back is definitely helpful sometimes. My selections off the tee were close to perfect. There wasn’t a scenario where I picked the wrong club.”

Mathews shot 75 in the first round to lead by two shots. But she quickly opened up the lead with birdies on the first two holes of the final round.

She missed some makeable birdie putts in the middle of the round, but three birdies in a span of four holes on the back nine blew the tournament open.

“If you watch her, you don’t know if she’s playing good or bad,” he said. “She never gets upset with her game. She never panics. She keeps her head about her and I’ve been very fortunate just to be able to coach her.”

Mathews admits she does feel pressure but tries to use it to her advantage.

“I try to use (pressure) as excitement. I just love being out here and performing under pressure. That’s what athletes love to do,” she said.

Wood said Mathews is willing to put in the time it takes to play consistently.

“She enjoys the game and her work ethic is unbelievable,” he said. “She’s the type of person you like to coach because you don’t have to say, ‘we’re going to practice, you better come out here.’ She’s out there before you are.”

The 69 in the second round was even more remarkable given the playing conditions. Mathews had to deal with wind that was gusting to nearly 20 mph, and slow play that made the second round last six hours.

“The last four holes were pretty strong winds,” she said. “I’ve been fortunate to play in some events where the wind was similar to this so I kind of learned how to play under these conditions.”

Mathews’ calm demeanor helped her deal with the slow play.

“I got a couple of chances to sit down on the tee box and just take a moment to myself,” she said. “I used it as a little relax time.”

Mathews started the college recruiting process this summer and expects to make a decision soon about her future plans.

In the team competition, Union Pines posted the best team score in the final round and finished second in the state. The Vikings shot 292-276 for a 568 total to finish just three strokes behind winner Wilson Fike.

“This has helped springboard our program,” said third-year coach Brandon Reynolds. “It’s an exciting time for us.”

The Vikings qualified a team for the state tournament for the first time in seven years.

“We’re in Moore County, the Mecca of golf, and we feel like we have so many resources,” Reynolds said. “The U.S. Kids golf program has been a huge asset, the First Tee and a lot of lessons and clinics at the local golf courses have all helped.

“We have a new conference and every single conference match our girls got to play against Pinecrest. They are the cream of the crop in our state competition. Every week we play against them makes us better. We also played in a tournament that included Reagan, the 4-A champion, and the O’Neal School, the private school state champion.”

“She has only been playing golf for about 18 months,” Reynolds said. “But she is an all-state basketball player and an all-conference tennis player. She has done a phenomenal job leading our girls by getting everyone to buy in to the extra work it takes.

“I feel this is going to be a new standard for our school to be here competing,” added Reynolds. “That’s kind of what we are hoping for.”

Rockingham County started the final round six shots behind Fike but slipped to third place. Senior Elli Flinchum led the Cougars with 84-82 — 166 to finish sixth in the individual standings.