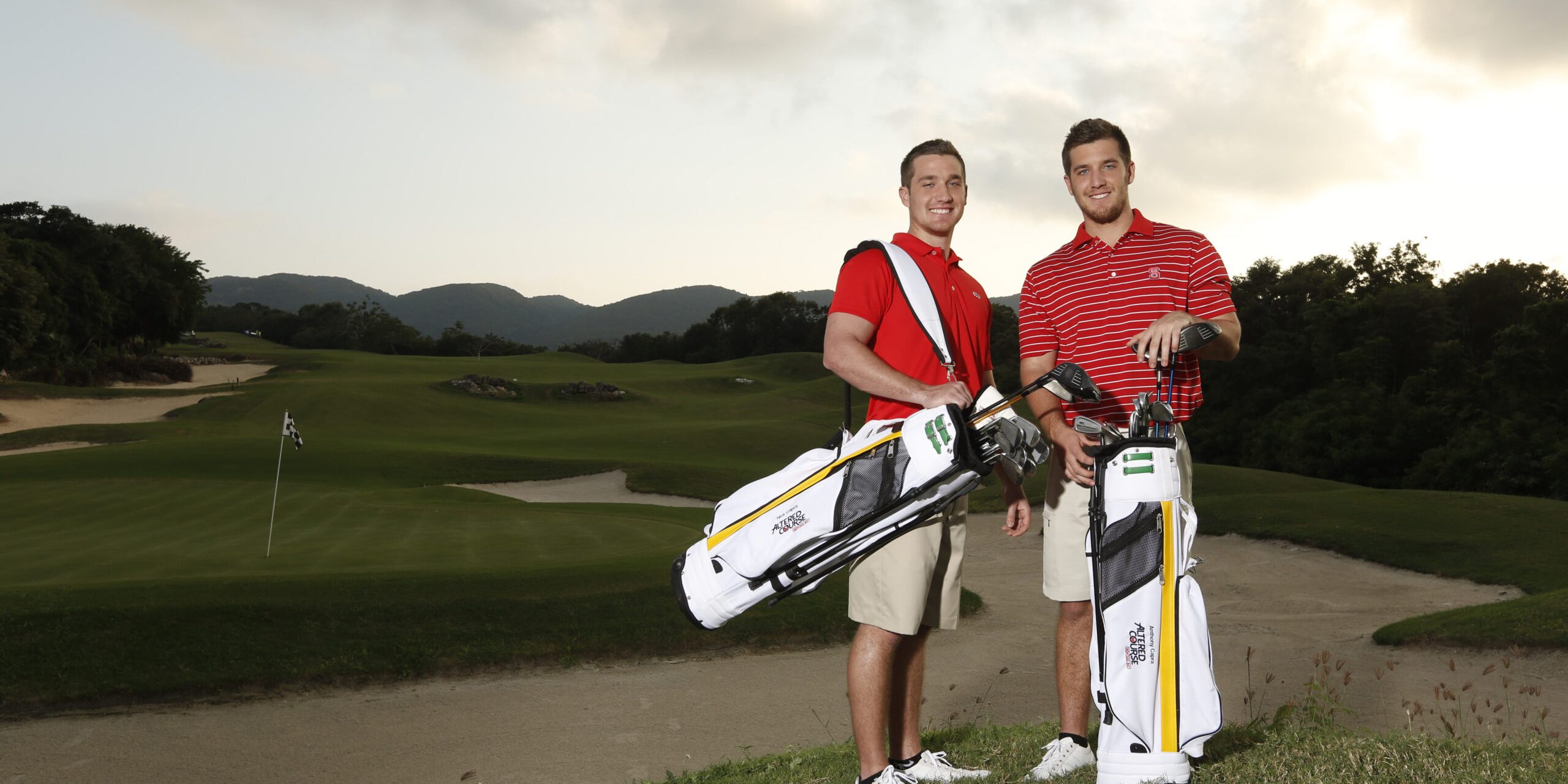 Identical twins Anthony and Nick Capra have taken an unconventional golfing path since their Davie County High School days, so it’s ironic the two were able to navigate their way to the top of Golf Channel’s new reality series Alerted Course against some stiff competition, recently winning $100,000 in cash and prizes.

The twins from Advance excelled at baseball and soccer growing up, but entered high school at “110 pounds soaking wet,” says 23-year-old Nick. “We were too scared to play baseball so we took up golf.”

The two began prep competition as sophomores. Neither could consistently break 100 over 18 holes, but neither got discouraged. Two years later as seniors their scores had improved by more than 30 strokes each. Nick’s best was a 66; Anthony a 69.

“After we graduated high school we were thinking ‘what the heck are we going to do?”’ Nick said. “We didn’t know, just like most kids. We were searching universities to go to and we found out that N.C. State had a major called golf management and we were like ‘Are you kidding me? You can major in golf?’ That was kind of a no brainer for us.”

However, for one of the few times the two seemingly inseparable twins didn’t follow each other. Nick still had the golf itch and decided to attend UNC-Charlotte and play golf as Anthony went off to N.C. State to begin his studies. Nick didn’t make the 49ers team and transferred to Raleigh to once again join his twin brother.

“I was naïve when I played high school, thinking I didn’t need to practice my short game because I was hitting most every green,” Nick said. “My short game wasn’t up to where it needed to be for college golf, to say the least.”

Fast forward to this past December as the two were preparing to head into exams, and move one semester from college graduation. Anthony was flipping through some Instagram posts one night when he stumbled upon something from the Orlando-based Golf Channel.

“There was a little post saying something to the affect that if you are interested in competing in our new series it is going to be golf/fitness related,” Anthony said. “I showed it to Nick and told him it was right up our ally; we play golf and we’re huge into fitness. I told him I think we should try it out.”

What happened to the 110-pound twins? Well, once on N.C. State’s campus the two began working out – hard.

“When we went to college we said ‘hey they have a gym here and you don’t have to pay for it’ so we started working out to build some muscle and start feeling better about ourselves,” Nick said. “We went into the gym from day one. It is kind of like golf; when you hit that one good shot you just want to keep going out there and playing more. That’s kind of how fitness is when you see the results.”

So, in early December the Capra twins became one of approximately 400 teams across the country to apply for the Inaugural Season of Altered Course Montego Bay. The reality show would require teams to navigate re-imagined golf holes in excess of 700 yards and traverse natural obstacles along the way.

Eight teams would be chosen from the auditions. Anthony was in the shower and missed the call from the Golf Channel in early January of the news that the two had been chosen. The network then called Nick, who answered.

“I just couldn’t believe it,” Nick said. “I didn’t think in a million years we would get picked on a show like this. I was pumped and excited. We had never been to Jamaica; the only place outside of the U.S. was Scotland, so we were thinking it was going to be a great experience.”

Excitement turned to a bit of apprehension when the two arrived for the filming of the show.

“We initially got there and met everybody, and they all had some sort of golf background, whether it be college or professional or playing on some tours,” Anthony said. “Me and Nick were looking at each other and I said, ‘Crap, we’ve only got high school golf and these guys are out there making a career out of this.’ So we went into the competition just trying to make it through the first episode. Other than that we had no expectations, we were just out there trying to have fun.

“There was no strategy whatsoever. We had never done this. We trained for it, kind of, we worked out and practiced, but we never actually went out and did a speed jog round to kind of prepare for it. We really didn’t know what it was going to be like.”

Anthony and Nick, along with the rest of the teams, soon realized they were in shape, just not reality golf shape.

“If you haven’t actually ran a golf hole it is a lot harder than you think,” Anthony said. Especially some “extreme holes” that required unique golfing ability and fitness levels that can be difficult to replicate during any sort of “practice rounds.”

“I remember the first few challenges — and all the teams did this — was to focus our attention way too much on the speed, and how fast we ran the hole,” Anthony said. “Everybody was literally running as fast as they could to finish the hole and we weren’t focusing on hitting proper golf shots. You could see over time everyone starting to pace themselves, to slow themselves down and concentrating more on hitting good golf shots so you saw the scores improve.”

The final episode, aired on Aug. 3, came down to a battle between the 23-year-old Twins and the Texas Hustlers, who were both in their 30s.

“I didn’t think (the money) was a factor until the last episode,” Nick said. “You were a bit nervous on the other episodes until they said “go” on the tee box, and once they said that you just tried to block everything out. You didn’t see the cameras or anybody watching, but the last episode was kind of nerve-racking, knowing you’re playing for $100,000.”

The twins were flying back from TV interviews on the Golf Channel and didn’t watch the winning show. However, they realized the impact of it all once they landed in Greensboro and turned their phones on.

“My phone didn’t stop ringing, didn’t stop vibrating,” Nick said. “People who I haven’t even talked to in years were texting us. It was crazy.”

The Capra twins, who are living with their mother in Winston-Salem until the end of the year when they will each plan to pursue a professional golfing career, won the following with the reality show victory:

They laughed when I asked if they were splitting the money.

“Since I hit the better golf shots and I carried him most of the show I think I should get a bigger cut,” Anthony said. “Nah, we’re splitting it.”

Anthony’s favorite experience in the Caribbean was the jerk chicken, while Nick’s response was a bit more all-encompassing.

“Just to see how a reality show is produced — all the cameras, all the people — it was really cool to see it all come together and really cool to be a part of it,” he said.

“Hey, we grew up doing everything together and if we both wound up playing professionally after winning this show, well, that would be the ultimate dream,” added Nick.