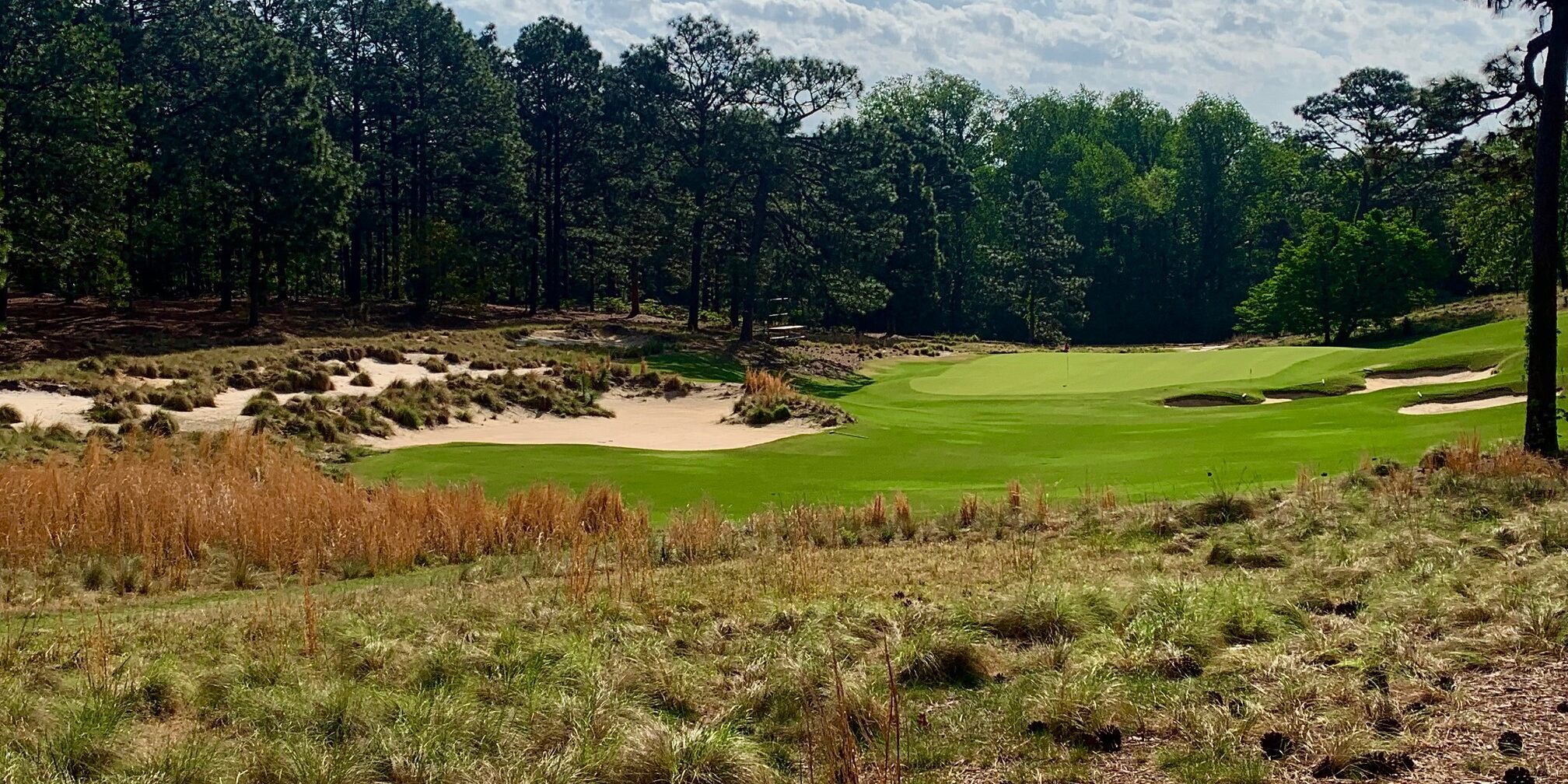 Pine Needles has a new look – and it’s quite stunning as the iconic resort located in the heart of the North Carolina Sandhills prepares to host its record-setting fourth U.S. Women’s Open.

Just in the last 60-90 days alone, upwards of 30,000 native grasses have been planted by golf course architect Kyle Franz and his team of “wiregrass whisperers,” giving the Donald Ross 1926 classic course a rugged and eye-popping appearance as the best female golfers in the world prepare to tee it up in early June. 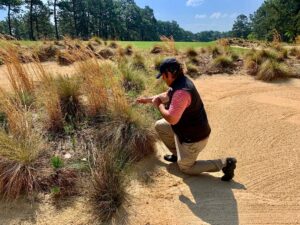 Golf course architect Kyle Franz examines some of the 30,000 native plants that are new to the Pine Needles layout. Photo by David Droschak

Shannon Rouillard, senior director for USGA championships, approached Pine Needles CEO Kelly Miller a few years ago about a potential championship set-up, asking if the course could be “tighten up” some with additional rough.

Miller immediately huddled with Franz and the two came up with a counter proposal.

“We asked if we could do it with sandscapes because that’s what we would do normally,” Miller said. “She said ‘sure let’s give it a shot.’ We could have planted grass back if we needed to and it wasn’t what the USGA wanted but it looks terrific.”

Rouillard, on hand this week for media day, gave her stamp of approval to the new look, which will actually play 26 yards shorter than it did during the U.S. Women’s Open here in 2007, but similar to how Pinehurst No. 2 unfolded in 2014 with no rough spilling directly into hardpan penalty areas.

“With the absence of meaningful rough and an abundance of fairway height, and closely mowed areas around these undulating greens, we’re going to see the ball rolling around quite a bit,” she said.

“Kelly and I like to keep improving, improving and improving Pine Needles, and Shannon really wanted to get after it in a lot of these areas to give the players something to think about, so it was a team effort across the board,” Franz said. “It has been a lot of fun producing this look.”

Franz, who now lives less than a sand wedge away from the 18th tee box at Pine Needles, spent countless hours from October through February with his team tweaking the sandy areas by transplanting as many as 1,000 per day to produce a visually intimidating, and a stunning showcase for a worldwide TV audience to witness in about a month.

“Visually, it’s as good as we’ve gone with it,” Franz said. “We’ve been picking away at this new course look since 2016 and this big push recently with planting has helped the cause so much. It looks like a fully realized vision. We got a really nice run of plants we were able to import this year – there were small ones, big ones, so they really do look like a natural forest environment as opposed to a perfectly hedged sort of look. The guys did a beautiful job with the planting.”

Miller agreed, noting that he and Franz have now devoted a full-time employee – Jose – to tending to the sandy graveyards.

“Jose has worked so hard to make it look natural,” Miller said. “Sometimes people just go in and line them up but he has done a great job of selecting the plants and then making them look random, making it look it as if they have been there for a long time.

“It’s hard to believe that’s 30,000 plants out there that have been put in the last 60-90 days and it looks pretty cool,” added Miller. “This look we’ve achieved just doesn’t happen, it is constant work, keeping the Bermuda grass out and keeping it clean looking.”

Franz said most of the native plants came from the property or within 20 miles of the resort.

One of the major changes added by Franz is a fairway cross bunker on the 10th hole that players now have to decide if they want to challenge the waste area or lay up short and play the par-5 as a three-shot hole. 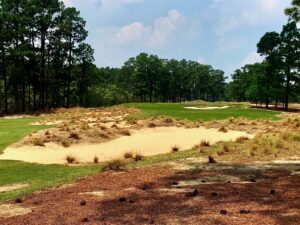 The new cross bunkering on the par-5, 10th hole. Photo by David Droschak

Franz has also redone the greens since the last U.S. Women’s Open was played here 15 years ago, adding what he calls subtle “horse and blade” touches while also producing some major swales on a few putting surfaces that will lead to interesting final-round pin placements.

“The thing about Pine Needles is it’s a really a tough golf course on its own, it taxes you in different ways with these up-and-over tee shots and the ridges in the middle of the fairways,” Franz said. “If you are hitting good, solid tee shots you are going to get that big speed boost forward but if you are hitting it weak off the tee you are going to be landing in these up slopes. It’s a different design from the other golf courses here like Mid Pines and Southern Pines. That’s one of the things Ross was so good at, was coming up with different themes on his golf courses.

“If you are hitting the internal areas of the golf course, the fairways, it’s probably easier because the fairways are considerably wider than what it was in 2007,” Franz said. “But if you get off the playing surface it starts getting wild in a hurry out there.”