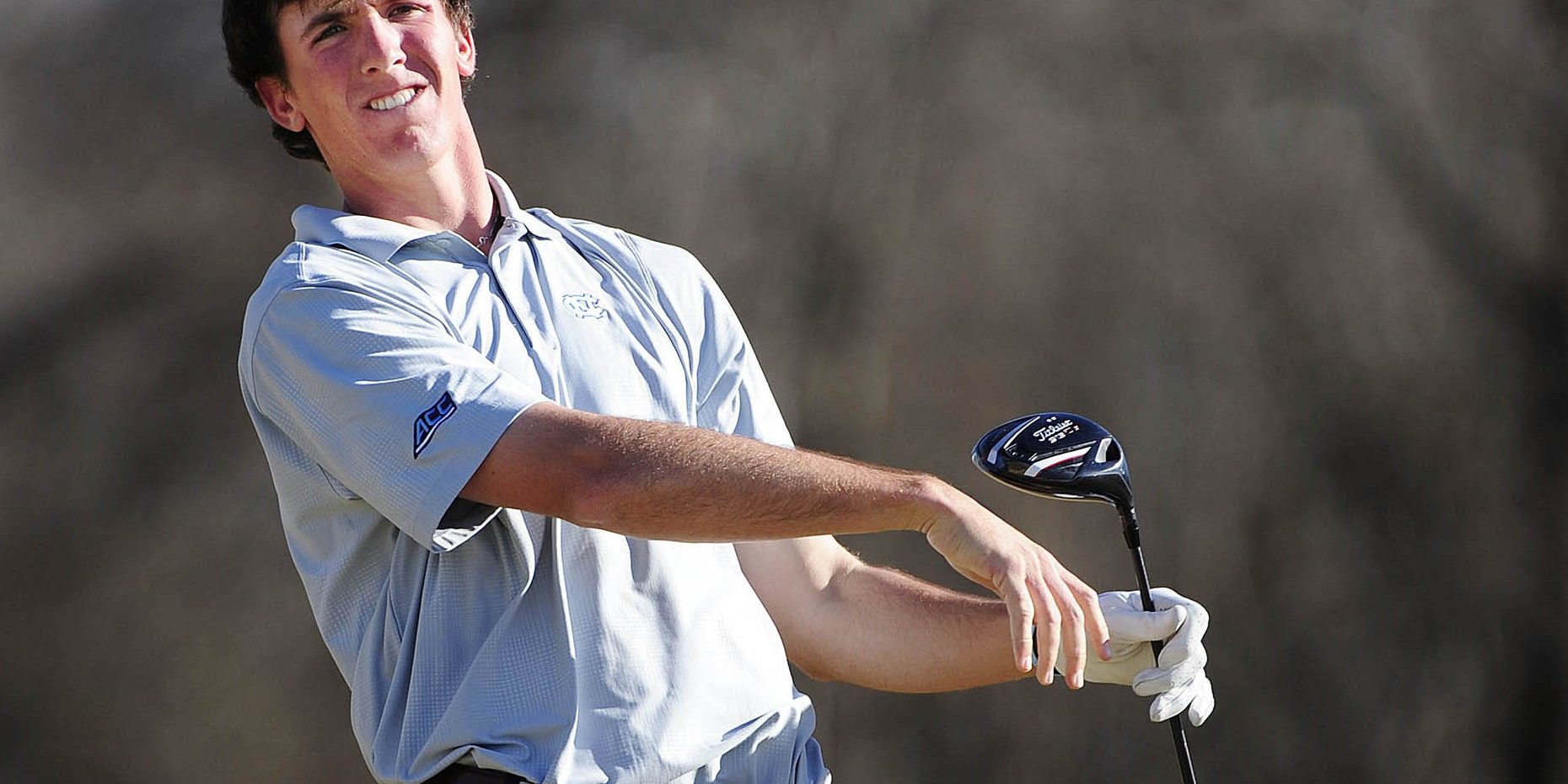 No telling what athletic path Carter Jenkins would have taken had he suited up behind home plate as an aspiring baseball youth a decade ago.

“I wanted to catch, but the coach’s son also wanted to catch, so unfortunately that stuck me in left field. That wasn’t a whole lot of fun,” Jenkins said. “My dad told me we were going to stick out the season because we don’t quit anything but we weren’t going to play that next year.”

But Jenkins didn’t give up sports. His father Bobby subsequently took him to the driving range at Wildwood Green Golf Club, a 5-minute drive from the family home in North Raleigh.

“My dad saw from the moment I touched a golf club that I loved it,” Jenkins said.

And that he had potential.

But who knew how that ability would develop as a teenager, or that Jenkins would grow 7 inches between his sophomore and junior years at Leesville Road High School.

A remarkable 59 at Wildwood Green – he was 11 under par through 13 holes — in the fall of 2012 didn’t exactly hurt his future stock among college golf recruiters.

Jenkins had his heart set on attending Duke University, where his longtime golf instructor Ed Ibarguen is general manager and director of golf at Duke Golf Club. But the Blue Devils had exhausted their scholarship offers when it came time for Jenkins to make his college decision, and the price tag for the esteemed private school wasn’t exactly in the family budget.

UNC-Greensboro had also recruited Jenkins early on, so he headed to campus without an ACC scholarship, and with less fanfare than some of his prep rivals.

It didn’t take Jenkins long to thrive. He was named the Southern Conference Freshman of the Year and his 72.47 scoring averaged was good for second in the league. He won once, and then won again in the 2014 fall semester.

But something was missing for Jenkins, and he wanted to transfer from UNC-Greensboro.

“It got me away from home and let me get into college golf slowly, but things started to change with the program and I just needed a better opportunity,” Jenkins said of his switch to the University of North Carolina’s golf program at mid-semester this past winter. “I felt like Carolina offered me a better opportunity to play professional golf after college.”

UNC coach Andrew Sapp recalled seeing Jenkins and his father in Pinehurst during his first recruiting trip after coming to Chapel Hill four years ago from the University of Michigan.

“I was at the North & South Junior and I watched his group and met his father,” Sapp recalled. “His father said, ‘Hey, I’m a Carolina grad, glad to see you.’ But he was wearing a UNC-G golf shirt so I learned quickly that Carter had already committed to UNC-Greensboro.”

Sapp said he was “stunned” when he got a call from the UNC-G coaching staff saying the Jenkins was interested in joining his program.

“It’s not easy to transfer in mid-semester … but he has done well here,” Sapp said. “For him, the transition was fairly smooth because frankly most of the guys on my team are from North Carolina and he grew up playing with them, and the ones he didn’t know he knew of because we played in a lot of tournaments with UNC-Greensboro.”

Jenkins, 19, hit the ground running this spring at UNC, becoming the team’s No. 3 player behind prep rivals Ben Griffin and William Register. The Tar Heels won their first tournament of the spring with the help of a top-10 finish by Jenkins.

“I turned around at one point where a bunch of holes came together and Vijay Singh was chipping on the green behind me. It was cool,” Jenkins said. “It was an awesome experience to see that they don’t do anything special. It proved to me that I can play with them.”

Prior to his Open qualifying experience, Jenkins shot 6-under to finish sixth in the 2015 North Carolina Open, and then in June rallied from a three-stroke deficit in the final round to capture the North Carolina Amateur Championship.

At 6-foot-4, 172 pounds, Jenkins describes himself as a “string bean.” However, his long arc enables him to average around 310 yards off the tee, which is longer than any of his UNC teammates, and longer than most golfers he competes with.

“Even the youngest junior golfers should be encouraged to develop as much club head speed as their little bodies can create,” Ibarguen said. “As his skill level and body grew, Carter began to hit the ball further and further. Additionally, as a junior in high school, I arranged to have Carter start working out with our physical trainer here at Duke, Alex Merrill.  This helped him become as physically fit and as strong in his legs, core and arms as he can be. The result is that he is one of the longest — and just as important — straightest drivers of the golf ball playing college today. With his driver, I have clocked him at a maximum club head speed of 123.3 mph, delivering a ball speed of more than 182 mph! That is BOMBING it!  For comparison, the average driver club head speed on the PGA Tour this year is around 113 mph and a ball speed of 169 mph.”

But Jenkins wasn’t always a long hitter, which has helped his all-around game with being able to take a crack at most par-5s in two.

“I used to just cotton ball it off the tee – short and soft,” Jenkins said. “But when I shot up and thinned out in high school I got all this leverage and arc that goes into a golf swing and I just started hitting I far. It’s a very good advantage.

“By not hitting the ball far for the first six years I played golf I learned how the hit the ball straight,” he added. “This course (Wildwood Green) is tight and it demands a lot of different curves off the tee and it is short, so if demands good wedge play. When I got the length I still knew how to hit it straight. The length and being straight is sort of a deadly combination.”

Sapp is excited to see one of his players performing so well in the summer months.

“The summertime is the best time college golfers can improve,” Sapp said. “They don’t have school, they don’t have to go to class, they are really focusing on their golf game, focusing on their individual tournaments. Playing well in the summer is the ultimate time for our guys to continue to grow with their tournament experience. We want them to come back refreshed, but also come back with the competitive edge and ready to go.”

Jenkins has plenty of golf left on his schedule between now and school in mid August – U.S. Amateur qualifying, the Porter Cup and the Western Amateur – among a series of events.

“From a ball-striking standpoint, there is no doubt in my mind that Carter Jenkins will attain his PGA Tour card,” added Ibarguen. “Assuming his continued work ethic and subsequent growth as a tournament player, I believe that he will become one of North Carolina’s greatest golfers of all-time. To be clear, that would mean multiple PGA Tour wins and more than a few Major Championship wins. Carter already strikes the ball at a ‘tour quality’ level. Like all players who currently hold their PGA Tour cards, there are parts of Carter’s game that will need continuing development to achieve the pinnacle of the professional game. Specifically, he will need to sharpen his scoring game, (150 yards in and his putting). When his scoring game is developed to as high a level as his ball striking, the sky will be the limit.”