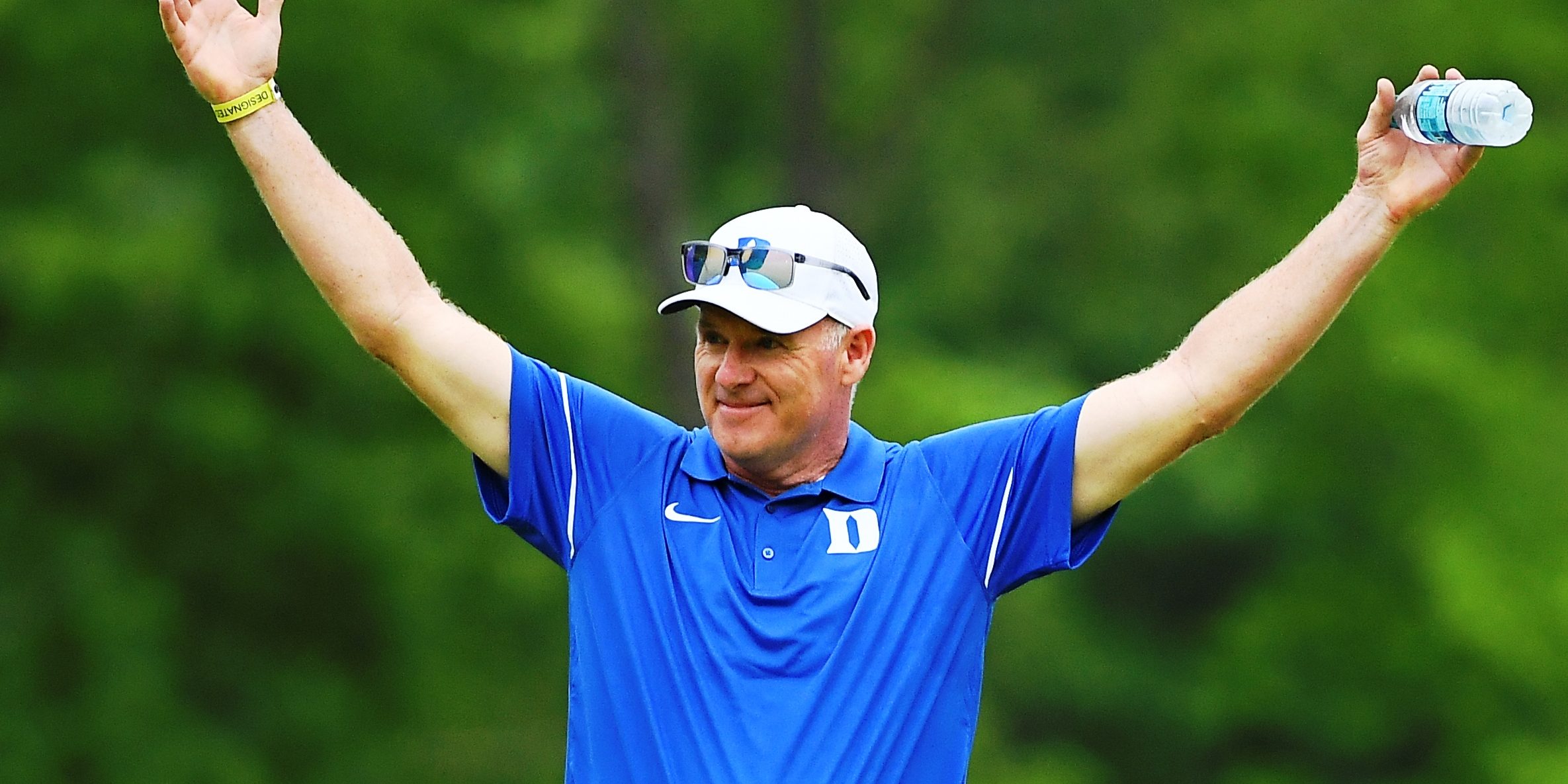 At least a small piece of Duke’s seven national titles in women’s golf under coach Dan Brooks can be attributed by Lyman Gallup.

Who the heck is Lyman Gallup, you may ask?

You won’t find Gallup in any women’s golf media guides nor is he the father of any of the stars that have dotted the team’s roster over the last two decades. In fact, there is no record at all of Gallup on the Durham campus.

For the record, Gallup is the former men’s golf coach at Boise State in the 1980s, who informed an assistant pro at Crane Creek Country Club in Idaho who was interested in teaching about the Duke women’s golf coaching vacancy.

That 25-year-old was none other than Dan Brooks.

Seven national championships later, Brooks still laughs about his response to Gallup prodding him to apply for the Duke coaching position.

“I said, ‘Well I don’t think I want to move to Texas,”’ Brooks remembers saying at the time. “He said, ‘Good, you won’t have to because Duke is actually in North Carolina.’ I don’t know what I had against Texas but I didn’t want to move there, but I was OK with North Carolina. Still, I had no idea where Duke was.”

Brooks, a former star golfer at Oregon State and a self-proclaimed West Coast guy, flew to the East Coast, landed at Raleigh-Durham International Airport and drove to Durham to meet with then athletic director Tom Butters and men’s golf coach Rod Myers.

The two B boys – Brooks and Butters – hit it off.

“I said to myself on the interview, ‘Man, I could work for this guy.’ I really liked Tom Butters,” Brooks said. “I thought Duke was beautiful. I grew up in Baker City, Ore., and spent three years in Boise so I had never seen anything like Duke, or had even been to the East Coast. There was a real culture difference but Duke really sold itself. There was no question in my mind that I wanted to work there once I visited.”

Brooks was hired to lead the Duke women’s golf team, along with assistant coaching duties with Myers on the men’s side. The two golf coaches also ran the golf course operations.

“I wore a lot of hats and spent a lot of hours out there,” Brooks said of Duke University Golf Club.

At 25, Brooks wasn’t sure he could coach, or become a good teacher for that matter, saying he “hedged his bets” by taking the coaching job.

“I figured I would be at a university in case I wanted to go back to school and do something else, so it seemed liked a smart move to get on a campus; I could explore the teaching golf aspect of it, stay in the PGA and I could explore things and maybe shift careers if I had to,” Brooks said. “But then I realized I really liked this coaching thing, the fact that coaching made me a better teacher because if you are not teaching well your team is not going to win. It really holds your feet to the fire and makes you better. You can’t just spout off ‘wiseisms,’ you have to know what you’re talking about because you are really going to tournaments and having to perform as a team.”

And a second coaching philosophy soon took hold for Brooks.

“You don’t want to just run around and tell them their swing looks good, believe in it, it’s great, if you don’t really believe it,” he said. “If you are telling them it looks good and it’s not really working within the laws of physics and you’re just trying to boost their confidence they are not going to believe you. Once you do that and make that mistake then you are done, they are not going to believe you when you say it looks good. Now you have killed the whole thing. You have to figure out a way to be honest with them and at the same time do your best to encourage them.

“It’s one of the great challenges of this coaching thing. How are you honest with them but at the same time keep their confidence up and boost their morale? It was especially a challenge when I didn’t have that much experience as a teacher.”

Brooks found his way in an age where theories ruled, winning the first of his handful of NCAA titles in 1999.

“There are a lot of numbers now, but 35 years ago when I started I was 25 so you lack some credibility right there because you are young, and you also didn’t have the TrackMan numbers and the video, and there were as bunch of different ideas flying around,” Brooks said. “Everybody had a theory, so all of those things were working against me as a young coach. Now, I’ve got more experienced and I’ve got the numbers and I’ve got the video and the teaching world has honed things in with some very important principles that make a whole lot more sense. There are fewer wild ideas flying around, so coaching is a whole lot of fun now because you have validation. I can validate everything that I’m telling somebody with numbers and with video and with what other great teachers are teaching. I had a lot of things working against me back in the day.”

More than three decades later, Brooks has a resume no one can match in women’s golf. His seven NCAA titles have all come in a remarkable 20-year span. He also has 20 Atlantic Coast Conference championship and 136 team wins – the most of any division I women’s golf coach.

“Coach Brooks is definitely a veteran at this,” said freshman star Gina Kim of Chapel Hill. “He has a great amount of knowledge on how to compete, how the team atmosphere should be, how he should lead a team, so being able to play under a coach like him is definitely something I am honored to be a part of. I feel grateful to him welcoming me into the Duke women’s golf team and helping me develop as a person and a player.”

Brooks’ most recent national title came in dramatic fashion in May when the Blue Devils edged ACC-rival Wake Forest on a difficult layout in Arkansas.

“It was a close team; they were united,” Brooks said. “They had great perspective on what we were doing and were really passionate about it, but at the same time they kept each other loose and had a lot of humor. They were just a lot of fun to be around.

“They worked hard in all directions – they worked hard with the golf part of it but they also just killed it in the weight room day-after-day, so that helped them because by the time we got out to that course in Arkansas we needed mental and physical toughness and we had it,” he added.

Brooks has learned to craft what he calls “a package” for each of his players, a sort of customized game plan of how to attack all of Duke’s unique challenges.

“I am going to see them play a lot of holes of golf, I’m going to see them hit a lot of golf balls so to pretend that they don’t need a little bit of attention along the way is crazy,” he said. “So, I decided to put a package together for each player that includes their performance coach, and it might include a psychologist, it might include my involvement with either a very small amount or a great amount, whatever is the best package for that player. My job is to figure out the best package and build a team around each kid that is going to make them the best person and the best player they can be by the time they graduate. That’s the fun of it. Sometimes I’m highly involved and sometimes I’m not involved much at all.”

Chris Kennedy, Duke’s senior deputy director of athletics, has been at the school since 1977 and first met Brooks as an academic liaison with his players. The two have become close friends and gone on numerous Iron Duke golfing trips that included Scotland and Ireland.

“I think ‘remarkable’ is the word for what Dan has accomplished here,” Kennedy said. “Sure, there are the generic challenges of coaching college golf — having the teacher and the team dynamic in an individual sport and all of that — but that is compounded at a place like Duke because there is so much academic pressure. The golfers who are good enough to play here have a real potential to play beyond college, so that is very, very important to them, but they have to survive and thrive in this academic environment.