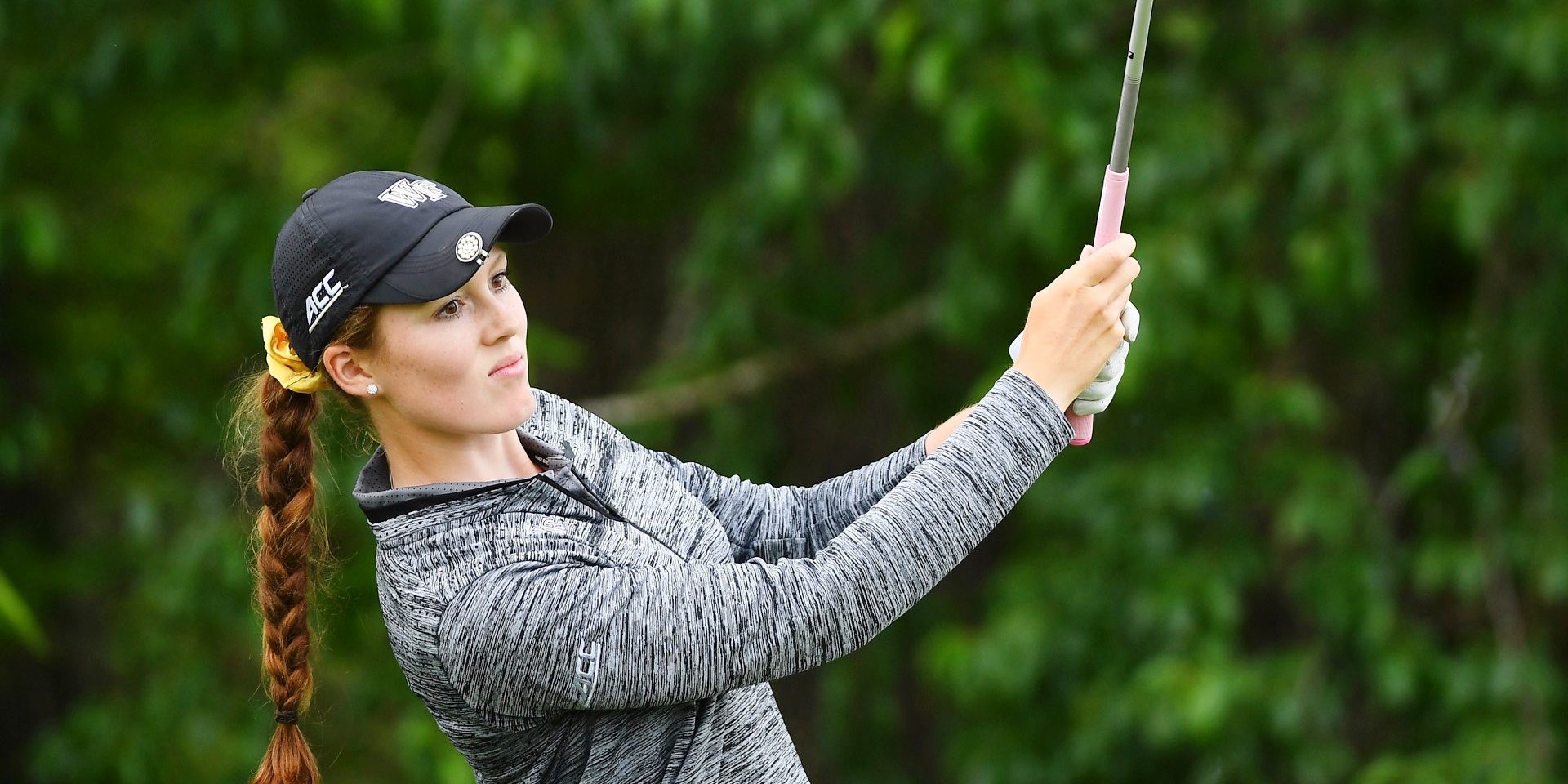 To say Emilia Migliaccio enjoyed a successful sophomore year at Wake Forest would be far too modest.

The 20-year old won the Atlantic Coast Conference individual championship, earned first-team All-American honors and led her team within an eyelash of the NCAA Division I Women’s Golf Championship.

The Cary native is unassuming when it comes to individual accomplishments, but the Demon Deacons’ near-miss at the national championship in May was an emotional one. With the team title up in the air, she birdied 18 to defeat Duke freshman Gina Kim 1-up, leaving each team with one win. Three matches went to sudden death, with the Blue Devils prevailing in two for a 3-2 win.

The match, which was televised live on the Golf Channel, captured the range of emotions as the two conference rivals went down to the wire.

“We were definitely bummed,” says Migliaccio, who won all three of her matches. “I was coming off such high adrenaline, like, ‘We can do this, we can do this.’”

But after the initial shock of losing, her teammates rebounded quickly.

“By the end of the night, we were laughing and having great fun in the hotel room. Everyone did their best. That’s all you could really do,” she said.

That level-headed approach played a role in her second college season, when she won three tournaments. Migliaccio won the Tar Heel Invitational in October (first in a field of 93) before winning the Bryan National Collegiate (93) and the ACC (60) in the spring.

It started with Wake Forest coach Kim Lewellen, who was hired last June to replace retiring Dianne Dailey after 30 years at the school.

“I wasn’t hitting the ball too great at the beginning of the year, and I knew she was really good at coaching, but she doesn’t really work with anyone unless they ask her,” Migliaccio says. “She started giving me a couple swing thoughts here and there and they were great. Her husband, John, and my mom all work together. It’s been a really cool experience to see how my ball striking has improved and become so consistent.”

The results showed right away. Migliaccio finished even-par or better in seven of 11 tournaments as a sophomore.

“Coach helped make my swing a lot more sustainable and a lot more powerful. It has been cool to see, when I reflect on the year, how it got more consistent. The bad shots were 40 feet on the green instead of a hook left in the bunker,” she says with a laugh.

For Lewellen’s part, the instructing has been easy.

“Emilia is just a phenomenal player and an extremely hard worker,” the Wake Forest coach says. “She is one of those players where there is never a day off and that shows in her game. She is a key component to this program. Emilia is going to be the heart of this team the next few years. Her work ethic is beyond anyone I‘ve ever seen.”

Migliaccio’s college coach is just one of her mentors. Her mother, Ulrika (Johansson) Migliaccio, played on the Swedish national golf team and at the University Arizona from 1991-95. She has taught her daughter about mental preparation, focusing on the process rather than the outcome.

And when Emilia needs another voice of reassurance, she can turn to Annika Sorenstam, widely regarded as the best woman golfer ever. Sorenstam and Migliaccio’s mother were teammates on the Swedish team and at Arizona. Ulrika put her daughter in touch with Sorenstam, and the two have spent time together at tournaments over the years. The eight-time LPGA player of the year had encouraged Emilia to ask for help when she needed it. After a frustrating junior tournament, she reached out.

“I wasn’t happy with how I played, I wasn’t feeling confident,” she says. “(I thought) well, let me email her about how I’m feeling. She sent this really long email back, talking about the process in golf and that it’s a journey. It was nice that, one, she responded so quickly, and two, she put so much thought into responding to me.”

Migliaccio’s substantial list of mentors is more than just a feel-good cloak. She counts on their counsel to reach her goals.

“What drives me? My biggest goal is to be No. 1 in the world one day,” Migliaccio says. “Over the years, I’ve just developed a stronger love for the game.”

She will continue to test herself against top competition this summer, including the Arnold Palmer Cup, the North & South Women’s Amateur Championship at Pinehurst and the U.S. Women’s Amateur. Along the way, there will be good rounds and bad ones, just as she experienced at the NCAA Championship. Before her run of match-play wins, she shot 85 in the first round of medal play, her worst round of the year.

“When I had the first bad round, I thought, ‘I don’t know what good thing is coming out of this because I can’t think of it right now, but I know something good is going to come out of it.’ And it did.”

“You have to make sure you learn from the hard stuff instead of getting down on yourself and regretting it,” she says. “It makes you more humble and you realize how hard it is. Then you become a lot more appreciative when the good things happen.”