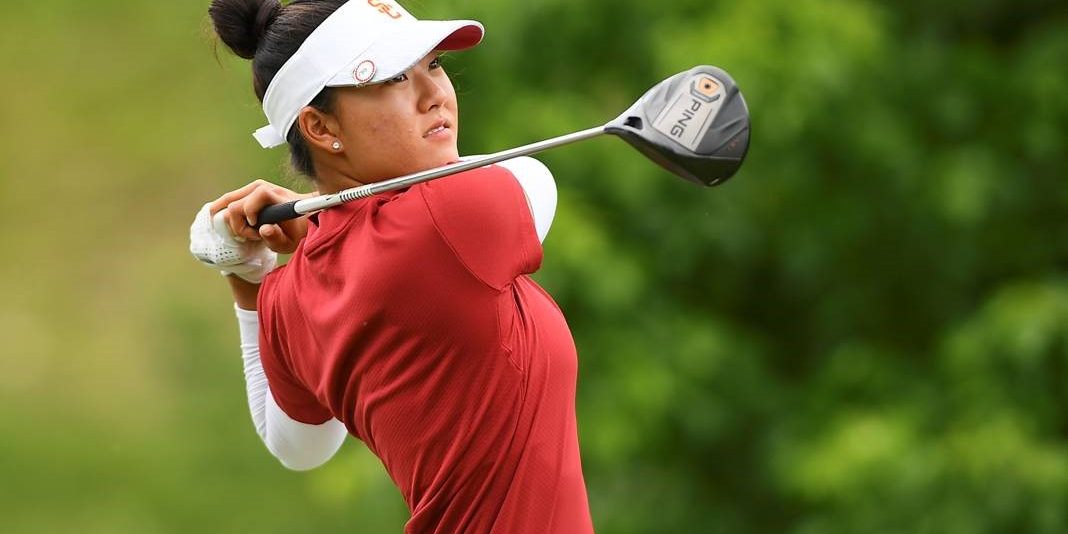 Former North Carolina prep star Jenny Chang, who set a state record with four straight 4-A individual titles, is well on her way to accomplishing her goal of playing professional golf. The sophomore at Southern Cal, one of college golf’s powerhouse programs, was once again named a first-team All-American and recently made the cut at the U.S. Women’s Open and played on the U.S. team at the prestigious Arnold Palmer Cup. Chang is now ranked 16th in the world among female amateurs – her highest mark ever.

“That’s crazy,” Chang told Triangle Golf Today on the back deck of Lochmere Golf Club during one of her rare idle moments in June. “I try not to focus on it too much but when I do see it it’s like, ‘Oh wow. I’m ranked pretty high let’s keep it going.’ I am just out there to play golf and enjoy myself.”

This year’s trip to the U.S. Women’s Open in Charleston, S.C., was a little less hectic than last spring when Chang was an alternate and received a call Sunday that she was in the field. Chang was tubing on a river with friends at the time and had to rush home and drive to Alabama for the competition. She missed the cut.

This time she shot 75-70-72-76 to tie for 62nd, playing a practice round with Open runner-up Lexi Thompson and her third round with former Duke star Brittany Lang.  “Their ball striking is unreal and they don’t miss putts inside of 6 feet so I know what part of the game I need to work at,” Chang said. “It helps to see that and compare myself to them.”

Chang finished first in the Washington state NCAA regional before playing in the NCAA medal play, where she finished a disappointing 36th.

Since graduating early from Athens Drive High School and entering college in the spring of 2018, Chang has won three times and has an additional 10 top 10 finishes.

“There were some expectations going to a school like Southern Cal with such a great golf program, but I just knew I had to play my game and practice the way I’ve always practiced, and by doing that it has allowed me to free myself up in tournaments and be more comfortable,” she said.

“Winning college tournaments just shows I can compete out there at that level, for sure,” Chang added. “After my first win in my first semester it was definitely a confidence booster because I wasn’t expecting much since I had just graduated from high school.”

Still only 19, Chang can’t believe in a few months she’ll start her junior season with the Trojans – which may be her last.

“It is just crazy how fast it has gone,” she said. “It is pretty common for women to turn pro early but I am not quite sure yet. Going to Southern Cal has definitely built that resume for me to get noticed, but there are parts of my game I still need to work on.”

Chang said she was too busy when she first arrived on the West Coast to be homesick, and it helps that her dad’s brothers lives about 45 minutes from the Southern Cal campus. But Chang does miss one thing in North Carolina.

“As soon as I got home I went straight to BoJangles,” Chang said. “They definitely need a BoJangles in L.A.”