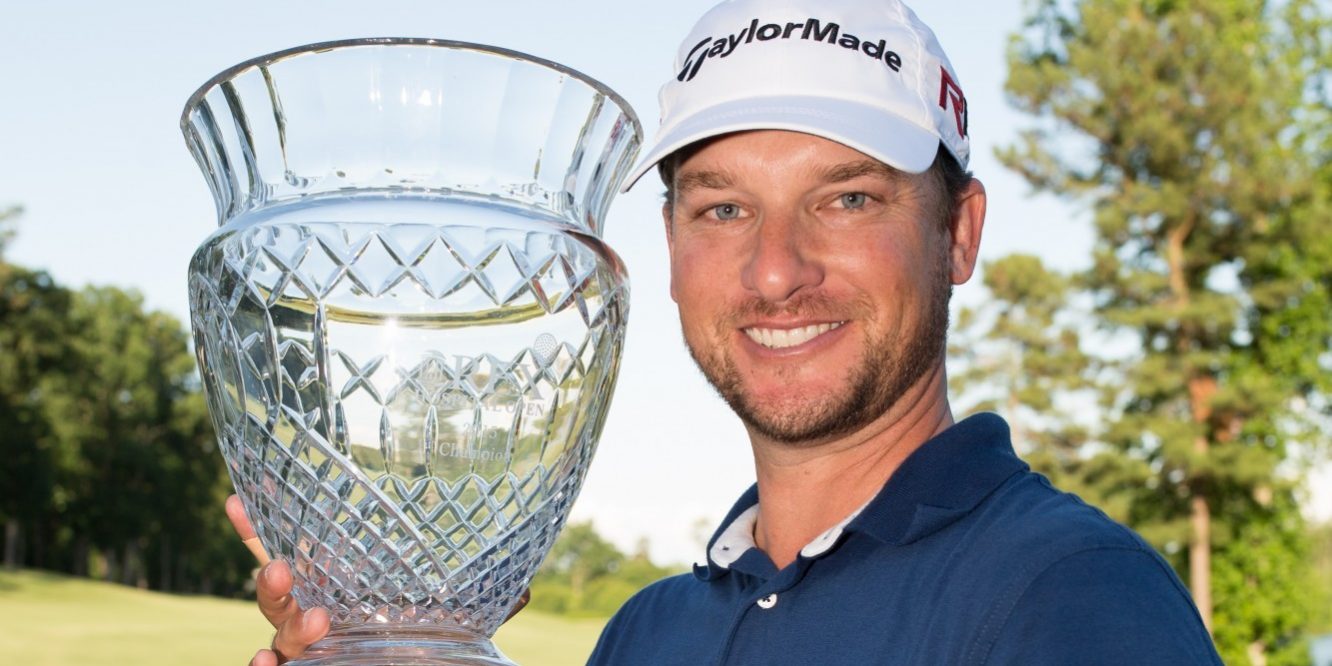 Thompson entered the 2015 tournament on a past champion’s exemption. His name was nowhere to be found on the Web.com Tour money list. After the Rex Hospital Open, the 36-year-old, three-time University of South Carolina All-American would not be guaranteed any more starts in Web.com Tour events. Meanwhile, between the Web.com and PGA Tours, Thompson had only made it through one Monday qualifier in about a dozen 2015 tournaments.

So when Thompson calmly drained a 4-foot birdie putt on the second hole of a sudden-death playoff against Patton Kizzire and Miguel Carballo to become the first person ever to earn a hat trick at the Rex there was good reason he was quickly swarmed by his wife, Emmi, along with his daughter Sophie and son Sam.

Along with the Rex Hospital Open trophy, the winner’s purse of $112,500 catapulted Thompson from nowhere to 15th on the Web.com Tour money list and earned him fully exempt Web.com Tour status through 2016.

“That victory means I get to keep playing golf for a living. It really does,” said Thompson, who previously captured Rex Hospital Opens in 2007 and 2011. “If I miss the cut, I’m looking for a job. Literally, I’m at the end of my rope. Miracles happen.”

The top 25 earners on the Web.com Tour money list are automatically granted a PGA Tour card the following season, with another 25 cards awarded following the completion of the four-event, season-ending Web.com Tour finals.

Thompson, who eventually finished 35th on last year’s Web.com Tour money list, said he is planning on competing again in this year’s 29th annual Rex Hospital Open on May 9-15. In late January, he came in second in Panama, boosting him into the Top 10 on the 2016 money list with nearly $70,000. A fourth win at TPC Wakefield would go a long way toward earning Thompson full-time PGA Tour status.

Also expected to compete in the 2016 Rex Hospital Open is Grayson Murray, a Raleigh native who competed in the 2010 Rex Hospital Open as a 16-year-old junior amateur, making him the second-youngest player ever to make the cut in a Web.com Tour event. Murray, now 22, turned professional in May 2015 and is playing on this year’s Web.com Tour.

As experience has shown, the best Web.com Tour graduates tend to arrive on the PGA Tour ready to win. Emiliano Grillo, who defeated Chez Reavie in a dramatic playoff at last year’s Web.com Tour Championship, won the PGA Tour’s season-opening Frys.com Open just two weeks later. The native of Argentina was one of three players to go from the Web.com Tour finals to the winner’s circle in the first four weeks of the 2015-16 PGA Tour season, joining the likes of Smylie Kaufman (Shriners Hospitals for Children Open) and Peter Malnati (Sanderson Farms Championship).

Along with its talented participants, the Rex Hospital Open has become renowned for providing much needed financial assistance to cover the cost of healthcare services and medications for underinsured and uninsured individuals in the Research Triangle region.

The event has been held in the Raleigh area each year since 1994; it moved to the Hale Irwin-designed TPC Wakefield Plantation in 2001. In late 2014, UNC REX Healthcare, McConnell Golf and the PGA Tour announced that the tournament would return to Wakefield Plantation for three years, through the 2017 tournament.

The tournament’s charitable efforts, coupled with its family and fan-friendly environment and impressive fields, have attracted thousands of golf fans over the years. As the Triangle’s premier charity golf event, the Rex Hospital Open has raised more than $9 million for patients, programs and services at UNC REX. Funds raised this year will support the new North Carolina Heart & Vascular Hospital, an eight-story, 114-bed tower under construction at UNC REX’s main Raleigh campus.

This year’s Rex Hospital Open Tournament Week will start with the new Triangle Cure Classic Pro-Am on Monday, May 9, which will raise money for the American Cancer Society.

Last year, the PGA Tour and its tournaments, which include the Web.com Tour and the Champions Tour, generated a record $160 million for charity, with three 2015 events alone on the Web.com Tour surpassing the $1 million mark.

“This truly is a premier sporting event and I encourage people in Raleigh to come see what we have going on this year,” said Brian Krusoe, tournament director of the Rex Hospital Open. “It’s an opportunity to see world-class golf right in our own backyard, but this event is about so much more. We have kids’ activities, live music, food trucks and at the end of the day people can feel good that they are supporting something that positively impacts our community. There are so many great events in Raleigh, but this one is special and I hope people continue to get behind it.”