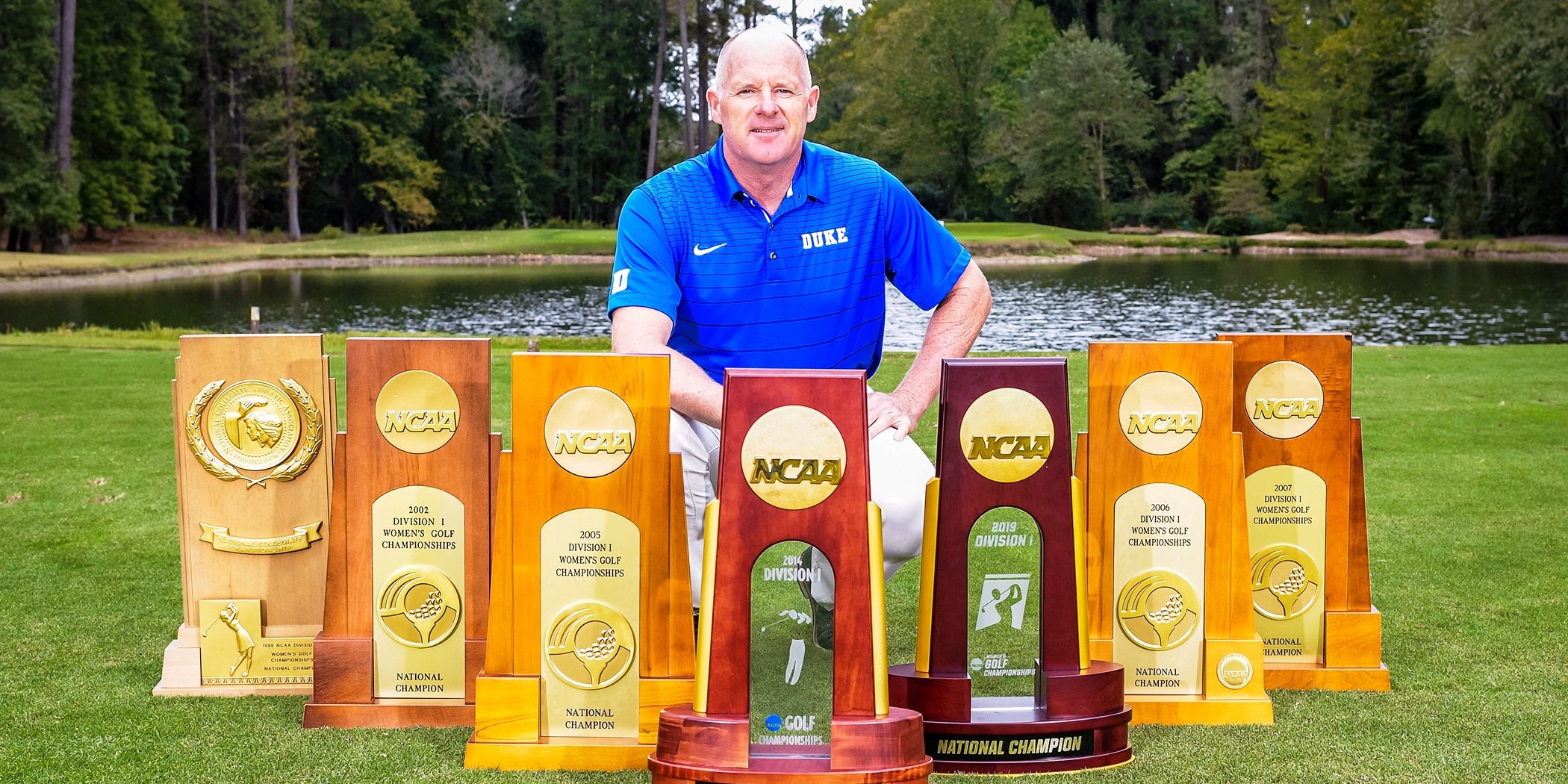 “I turned it down immediately,” Brooks said. “I felt like I had developed some skills in coaching women and I just liked what I was doing.”

As it turned out, some “mad skills” at developing championship-caliber teams and dozens of All-ACC and All-American talents.

Brooks, 61, who heads into his 36th season as the head coach of the Duke women’s golf team, will join an illustrious group of Carolinas Golf Hall of Fame members that include the likes of Arnold Palmer, Peggy Kirk Bell, Raymond Floyd, Tom Fazio and Donald Ross at an April banquet at Hope Valley Country Club in Durham.

Brooks has captured a remarkable seven national titles with the Blue Devils in the last 21 seasons, in addition to 20 career Atlantic Coast Conference championships and 136 team wins – the most of any women’s golf coach in NCAA Division I history.

Brooks has been named national coach of the year seven times while leading the Blue Devils to 17 top five national finishes. He is arguably the most decorated coach in any sport in ACC history.

Over the last two decades in particular, Brooks began to realize that less was more, often limiting his female squads to just six or seven golfers.

“His coaching style in some way is kind of unique in that he is not just going to keep firing to see what sticks to the wall,” said former Carolinas PGA executive director Ron Schmid, who Brooks replaced at Duke in the 1980s. “If you look at those squads, you can just see how those kids really become a family. When the entire team is playing all the time they learn to work as a family. It’s really neat to see.”

Duke has won a lot under Brooks, but the coach admitted he and his team rarely talk about “winning.”

“Everything we do is about the process,” Brooks said. “We don’t set a lot of goals. Winning is an assumption; it’s there and you can count on it being there because our golfers are high achievers. The idea of winning is very, very high and we don’t hide from the idea, but we just don’t spend that much time on it. We try to make things competitive so they’re comfortable with competition. That is kind of how I prep them and I stress keeping a perspective on things, for them to realize that golf is a game; and that you leave golf on the golf course and never take it home. It’s very simple stuff but can be hard to do.

“It is important to me that my players have a life on campus other than golf. I probably ask less of them hours-wise than a lot of coaches do. We’re a high academic school and there are also a lot of just amazing people at Duke so I want them to be able to be friends with and to get to know them. To inundate them with practice would not be a good thing. If golf is not everything to them in life then wins will be specials and the lows won’t be too devastating.”

Brooks heads into the 2020 spring season with another top team that looks to repeat as national champions.

“The (Carolinas Hall of Fame) reflection thing is a little hard because I’m still at it, still going hard, so I think more forward than I look back,” Brooks said. “But probably the most astounding thing about the years I’ve been with the Duke women’s team is how golf has evolved. The numbers the female golfers are shooting now are amazing … and how the different eras have taken scoring to different levels. You don’t see those sort of scoring jumps on the men’s side because the talent level in men’s golf has been very deep for a long time. What has made women’s golf exciting is this incredible improvement, and I’ve been able to be with that for all 36 years, and really observe some amazing things. Your team culture now has to be ready for freshmen to come in and be astoundingly good. It has made it very exciting.”

Brooks is a former star golfer at Oregon State and a self-proclaimed West Coast guy who never really envisioned being a college coach.

“I was a golf pro at a club Boise, Idaho, and then all of the sudden I’m coaching a women’s college team and I was just 25 years old. I had no expectations but I came to really enjoy it,” Brooks said.

“He is that guy who is always doing things at the highest level, and when he was hired it was easy to see he was all about the kids, all about the student-athletes,” added Schmid, who nominated Brooks for the Carolinas Hall of Fame. “Everything Dan does is going to be anchored with ‘is this the best thing for the kids that I am working with?’ He looks out for what’s best for everyone else before Dan Brooks. That’s a great cornerstone to have.”

And these are just not your average run-of-the-mill college golfers Brooks has been mentoring for much of his career as Duke’s academic demands can, and often do, trump athletics.

“Over time, you learn to pay attention to warning signs or red flags in terms of recruiting,” Brooks said. “You have to not only observe the things that are extremely positive but some things that may be more negative. I learned to become a better observer of character and talent as you built a team, and then pay attention to those things that you see and actually act on those things rather than not see them or ignore them, and if you do you will pay the price later. We’ve had incredible women on our teams, and it takes a little bit of knowledge to bring together people who are really going to be a nice blend for a team. And it isn’t just talent. Talent is a big part of it, but it’s definitely not just all about talent.”

Brooks has learned patience, saying his No. 1 lesson over the years and advice he has for aspiring college coaches is to “sleep on it” when required to make tough coaching decisions.

“As a journalist you have to get things out but as a golf coach I had to learn how to slow down and be patient,” he said. “Sometimes you just have to step back and let things work themselves out. You have to decide whether to involve yourself or not, and that’s a very simple thing that time teaches you. You can act immediately in this job and it will make you feel good for 10 minutes, and then you’ll pay the price, or you can sleep on it, be patient about it, give it some thought, make sure you get all the facts, and then decide at that point. And that goes for really any sort of job.

“The thing I come back to all the time is that golf is a walk through life. It’s a metaphor, a cliché – it’s something that is just so wrapped up in the human experience. It’s great to be a part of helping them learn to manage life, because golf is just a bunch of failures and successes, wins and losses, and great excitements and punishing experiences, all wrapped up in one little sport.”

Brooks admits that one of the highest honors in golf in the Carolinas is a bit overwhelming.

“When I was playing college golf in Oregon and then working as a golf pro in Idaho we always thought of the Carolinas as kind of golf central,” Brooks said. “And when I got in the PGA it was even more so where we thought of the Carolinas Section of the PGA as a place where great players emanated from, and there was Pinehurst and all these great places to play. And now that I’m in the Hall of Fame of the Carolinas Golf Association it is a little but surreal. I am humbled by the experience.”