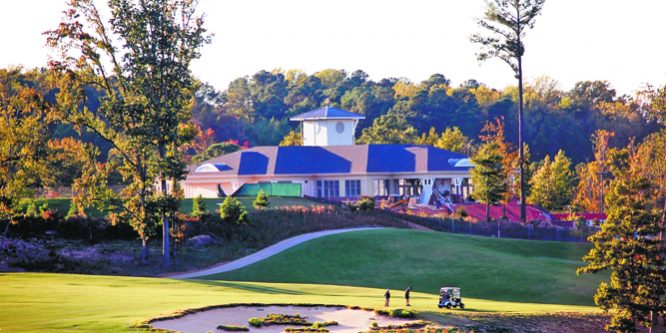 Chip Watson hasn’t tired of listening to praise golfers have for Lonnie Poole Golf Course. At times, though, the general manager of the North Carolina State University layout became weary of the first impressions and last words.

“When you rode up here, the first thing you saw was the trailer [as the makeshift clubhouse] and not enough parking, and already we were one down,” Watson said of the facility. “Golfers would play the front nine and say, ‘OK, that’s pretty nice.’ Then they got to the back nine and were saying, ‘Oh, this is awesome, great views.’ Then they come off 18 saying, ‘This is going to be great when they’re finished.’”

The word “finished” meant when the permanent clubhouse was built.

In December, the Carol Johnson Poole Clubhouse, an expansive two-story, 25,000-square-foot structure, opens and will further enhance the course that is located on the university’s Centennial Campus, in the shadow of Raleigh’s downtown skyline.

The clubhouse is distinct in design and functionality thanks in large part to the work of Raleigh-based Cline Design Associates. In addition to the accustomed pro shop and dining room, the complex will be home to the Wolfpack men’s and women’s golf teams, and feature educational space for the university’s PGA Golf Management program and College of Agriculture and Life Sciences — better known on the golf side as turf grass management.

“I have always thought we have something unique here,” Watson said. “[N.C. State is] the No. 1 turf grass school in the country and the PGM program is on the rise. The same can be said for the golf teams, as well. So seeing everything come together in this building, it’s neat.”

The building of the clubhouse was to have followed the opening of the par-72, 7,358-yard course, designed by Arnold Palmer Design Corp., but a downturn in the economy put those plans on hold. In 2010, the Poole family made a $40 million gift to the university, of which $2.5 million was earmarked as seed money for the clubhouse. The complex is named for the wife of Lonnie Poole, who founded Waste Industries.

The clubhouse, which took nearly 10 months to construct and meshes seamlessly with the Centennial Campus’ overall architectural scheme, sits at the top of the course’s entrance. Given the university’s reputation for use of bricks in its architecture, the clubhouse complex follows suit.

The front doors open to a small, but inviting lobby with couches and a widescreen television. To the right, a spiral staircase opens to the main foyer that leads to the pro shop and dining room. Watson believes that golfers will be curious to see what the first floor has to offer, but will ultimately enter the second floor from the side stairs and same level back entrance. There is also a lower level, which will house the course’s new fleet of 78 E-Z-Go golf carts.

The PGM program, which is one of 19 in the country and five in the Carolinas, will utilize the left side of the first floor that includes rooms for planning, club repair and swing analysis. While the program’s main offices and classrooms will remain based in Biltmore Hall on the main campus, program director Robb Wade believes the clubhouse will be beneficial for numerous reasons.

“Just the sheer fact they’re going to share a space with all of those different folks – what they learn some of it will be intentional and some of it will be through assimilation just by being close to those other aspects,” said Wade of the 112-student program.

“It will be nice for them to have a presence here,” said Watson, who estimates about a dozen of his current staff either are currently in or graduated from the PGM program.

There will also be an outdoor patio, a study room, a bag storage room, a laundry room and separate locker rooms with each player assigned their own personal full-length locker that is configured with outlets and ports for mobile devices.

“Again, this is something we have never had,” said Watson, who also doubles as the Wolfpack assistant men’s coach. “The women’s team did have some lockers in the basement of Reynolds Coliseum, but the men never have had anything. It’s like we have been vagabonds.”

In addition to the swing analysis space, there will be two hitting bays that can be utilized by the PGM program, the golf teams and, potentially, for public golf instruction. The training area will be equipped with Trackman swing and ball flight analysis technology and simulators.

The clubhouse’s upper level is more traditional in its usage.

A main hallway lined with trophy cases will honor the Wolfpack’s golfing achievements, while various wall areas will acknowledge the generosity of Lonnie and Carol Poole, along with course and clubhouse donors. There is a large classroom for the College of Agriculture and Life Sciences, along with another conference room that Watson said can serve as a rentable meeting space and media room for tournaments.

The pro shop will be exactly double the size – 988 square feet – of its current cramped confines in the trailer.

The dining, bar and food prep areas dominate the left side of the clubhouse. The dining area can seat 150-plus people comfortably and retractable walls can divide the dining room and bar into four separate rooms.

The dining room features a two-sided fireplace that is shared with an outdoor terrace that has seating for another 50-plus people, outdoor heaters and multiple widescreens. As impressive as the clubhouse’s interior is, the terrace adds another “wow” factor.

“Once the course was laid out, this was always going to be the spot for the clubhouse,” said Watson, as he stood at one of the highest points on the course. “You knew once you stood up here that there was going to be an awesome view of the course.”

In fact, there may be few views anywhere as compelling and inclusive as what this one offers.

“You can actually see six, sometimes seven, greens from the terrace area,” said Watson, who added that a few pine trees may be removed to enhance the view of the downtown skyline and Centennial Campus. “Fifteen, 16, 17, 18 – you can see someone hit almost every shot. It’s just amazing.”

The clubhouse’s opening also creates value for the programs and teams.

“Just like the golf teams, we’re trying to recruit students,” Wade said. “In order to woo a 17-, 18- or 19-year-old student we need to have some things that they’re looking for. Getting the golf course completed was obviously a good step in that direction. … [With the clubhouse] there are so many benefits to being close to the operational center of the golf course and then, from a teaching standpoint, having the technologies and facilities available to us. It’s just going to make our job easier in terms of recruiting.”

Lonnie Poole Golf Course has been selected to host the NCAA Division I Men’s Regional in 2014, followed by the women’s regional in 2015. Watson said, depending on how well the regionals are received, a bid to host the NCAA Championships may be next, along with more USGA and Carolinas Golf Association tournaments.

“Completing the clubhouse is a big step, and opens up any number of possibilities for us,” Watson said.

It will also, no doubt, change first impressions and last words.