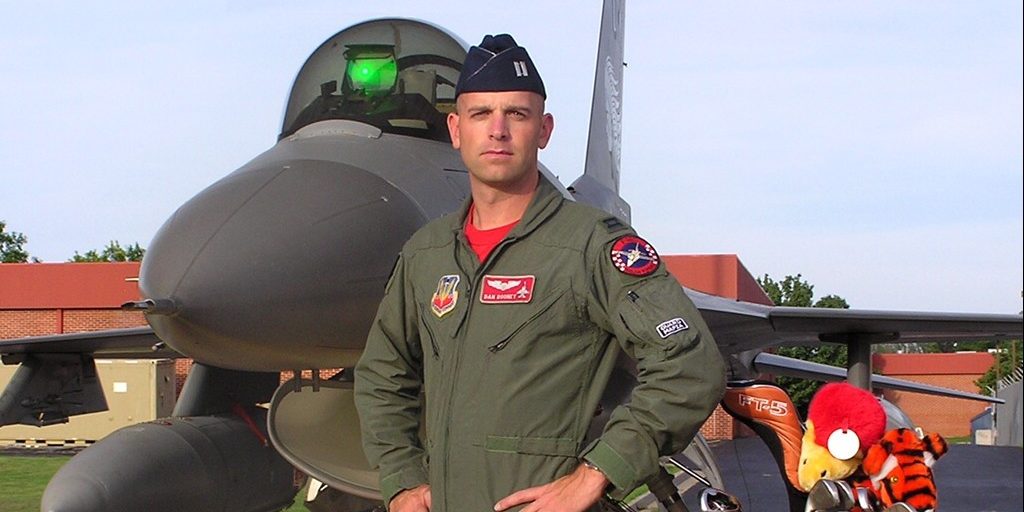 By Robert KimballGolfers are special people. While they play an endlessly frustrating and sometimes seemingly hopeless game, they as a group always seem to believe in giving back. Not only to the game itself, but also via charitable giving to those in daily life who struggle and are in need of assistance.

It would be hard to argue that in the United States any other organization deserving more honor, recognition and, simply put, a collective “thank you” than our active military who serve with dignity and honor. With that honor also comes another side, and one deserving of help and charitable giving.

One such charity was hatched as many great ideas are: A small event touches a person, and through inspiration and determination, he or she turns this inspiration into a reality. The man behind one of these ideas is Dan Rooney. The inspiration happened in an unexpected place, a delayed and rainy flight from Oklahoma to Michigan in 2006.

Rooney – officially Maj. Dan Rooney – is an F-16 fighter pilot in the Oklahoma Air National Guard who also is a PGA golf professional who served three duties in Iraq. On this particular late-night flight, Rooney was walking down the aisle to coach seating when he noticed a military man in full dress sitting in first class. Rooney thought it was nice of the airline to upgrade the soldier and thought no more about it. But, as the plane touched down and headed for the gate, the airline captain announced there was a special passenger who is an American hero on board, a man by the name of Corp.  Brock Bucklin, who was killed in action in Iraq. It was his twin brother, also in the military, who occupied the first-class seat in order to escort the body back home. The captain requested that everyone remain seated until the casket was properly removed from the lower manifest of the plane.

Well, it turns out Rooney had a window seat that night.

He saw the casket coming out, with the brother standing rigidly at guard to receive it, and Bucklin’s wife and only son, Jacob, both crying on the cold, rainy tarmac. It wasn’t until that moment that Rooney thought about that side of war – those left behind. Here was this young boy who was essentially left with nothing. It made Rooney immediately think of his two girls and what would happen to them if he was killed in action, something that had not crossed his mind until that night. The story, unfortunately, gets worse: over half the passengers had disregarded the pilot’s request and left the plane anyway with seemingly no regard to the fallen soldier and his family.

Rooney committed that night to spend his life changing the future of America’s grieving spouses and children. In 2007, he formed the Folds of Honor Foundation, a non-profit charity dedicated to providing scholarships to the surviving families of fallen military heroes.

The feeling of pride combined with tempered sadness is evident in the voice of Ron Schmid, the executive director of the Carolinas PGA (CPGA), headquartered inside Bryan Park in Greensboro, when he tells that story of the charity’s humble beginnings.

“[Rooney] came up with the concept of Patriot Golf Day, which asked golfers to add $1 to their green fee over the course of the Labor Day weekend, with the hope it might be able to raise a little bit of money. Well, it raised a great deal of money that first year. The next year, at our 2008 annual PGA National meeting, he spoke to the large group, told his story and it really caught the attention of the CPGA what a great charity this was and could grow to be,” said Schmid. “At that time, we had three military officers in the state who were PGA pros – Mike Casto, Karl Kimball and Kelly Childs – who really embraced the Patriot Golf Day project. In fact, Casto is the professional at Fort Jackson military base golf course.”

Schmid and the CPGA did everything they could to promote the Patriot Golf Day, and word spread quickly. As the Folds of Honor program began to develop, many different scholarship recipients would become available, and the need of funding was evident. “So, if it wasn’t for Dan coming to our meeting that year, and the initial support of our three officers [it was almost a perfect storm], I don’t know if the Carolinas PGA would have the influence it does today,” he said. “We certainly would still support it, but I don’t know if we would have jump-started it like we did.”

The amount of money raised kept rising each year, and the Carolinas section was consistently at the top of national scholarship donations. He estimates they have raised some $2.5 million since the start of the endeavor. “We support it at the utmost level,” Schmid said.

In 2012, the Folds of Honor Foundation came to the CPGA annual meeting and presented it with the first ever Freedom Warrior award. “It sits on a stand in our lobby, right below our PGA logo, and I like to think that the Warrior is standing guard at the PGA headquarters to keep us safe,” Schmid says with obvious pride in his voice.

The CPGA led the nation last year in donations to the Folds of Honor Foundation. In 2014, the CPGA and over 175 of its facilities raised more than $500,000 through various events and initiatives. The Folds of Honor Foundation provides scholarships and other educational assistance to the spouses and dependents of those that have been killed or disabled in military service. Since the founding in 2007, the organization has awarded more than 7,500 scholarships, including more than 2,000 in 2014.

If you are planning on attending the PGA Tour’s Wyndham Championship (www.wyndhamchampionship.com), Aug. 17-23 at Sedgefield Country Club in Greensboro, you might notice a special military pavilion between the 10th and 18th fairways. Mark Brazil, tournament director for the event, is very proud of the effort made by local and national companies to make this “a special place where we can entertain and hopefully show our appreciation for those in the service.”

Brazil says they will bus in 100 members of the military from Fort Bragg to the Wyndham each day. Along with free admission, Brazil says they plan to provide complimentary food and beverage inside the pavilion.

“We have some great partners this year,” he said. “Mack Trucks is our anchor sponsor and we have help from Blue Ridge Companies, Pepper Moon Catering, R.H. Barringer and Ruth’s Chris steakhouse.” In addition, veterans and a guest will be admitted to the tournament free of charge as will active-duty personnel.

Brazil noted that all of this doesn’t happen overnight, and it couldn’t be done without the help and planning of the volunteers and sponsors. There will only be food and beverage served during the actual tournament days, Thursday through Sunday, but the pavilion will be open all week. On Monday of tournament week, Callaway Golf will custom fit two combat-injured warriors for clubs designed to help people with physical disabilities using Callaway’s unique Callaway Warrior Club Fitting program. Selected warriors are also treated to a behind-the-scenes tour of the Callaway equipment truck, and the possible interaction with actual PGA Tour players while there.

This is all done in partnership with Birdies for the Brave, a charity originally created in 2006 by PGA Tour player Phil Mickelson and his wife Amy to support combat-wounded veterans. The PGA Tour adopted and expanded it, and so far has raised more than $13 million for non-profit military home-front groups that are supported by PGA Tour players, which provide direct support to military members, veterans, and their families ranging from financial aid, rehabilitation services, counseling and housing to educational scholarships and career development.

In order to take advantage of the complimentary tournament access, and access to the military pavilion, military members must register at www.birdiesforthebrave.org.