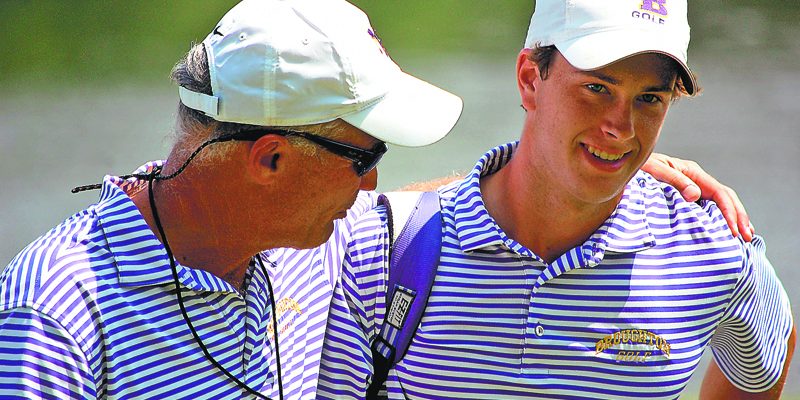 Anderson Marlowe was trying to keep his 59th birthday quiet, but you’ll have to forgive his Raleigh Broughton golf team for letting loose some as the coach was presented the 4-A state championship trophy.

Marlowe was serenaded with a rousing rendition of “Happy Birthday” by a group of ecstatic prep golfers and parents on a steamy late afternoon at Carolina Trace Country Club in Sanford soon after the Caps polished off their 11th state high school men’s golf title – eight of those 4-A crowns coming since 1998.

“When you get to this age you try not to tell people how old you are but this has to be one of the best birthday presents ever,” Marlowe said.

“We played really well because the pressure of team golf is like the Ryder Cup,” he added. “For these guys to get out there and do it is phenomenal. They won it as freshmen and then last year they came in a little apprehensive, not really knowing how to defend it. They really wanted to get back at it and they did a great job of it.”

A downtown Raleigh school that has produced state champions such as Webb Simpson and Scott Hoch didn’t generate an individual champion this time around but a veteran squad left little doubt down the stretch as it became a two-team race between the Caps and last year’s champion Southern Pines Pinecrest.

Broughton led by five shots coming into the second and final round on the Lake Course, and while stumbling as a team on the 9th hole, the Caps regrouped and cruised to the championship with a stellar back nine in which every player posted nine holes in the 30s.

“We were feeling kind of down after No. 9 because we played it 6-over as a team,” Marlowe said. “We just told our guys they had to grind it out on the back side. You have to do that, you have to finish strong.”

“The ninth was a speed bump for a couple of us but we responded well as a team. I’m proud of everybody coming back and facing a bad hole like that, playing well and keeping our heads together,” added junior Stephen Saleeby.

Broughton had five of its golfers place in the top 25, once again led by 2012 individual champion Saleeby, who has now won a state title, finished second in 2013 and tied for fourth this time around with rounds of 72 and 73. He tied for low-man amongst Broughton’s star-studded lineup as Preyer Fountain shot 71-74.

“Stephen is a warrior; Stephen gives up nothing on the golf course,” Marlowe said. “He’s just a phenomenal guy to have on your team. I tell these college coaches who are recruiting him that you want to play with him, not against him.”

“I’m a bit intense; I’m pretty hard on myself,” added Saleeby. “I push myself after bad holes and just try to stay in it to the best of my ability. This really feels good and I’m excited about all of our futures.”

There were only two rounds carded in the 60s over the two-day championship – the first 68 coming in round one by Cornelius Hough’s Patrick Cover, and the other registered in round two by Raleigh Millbrook’s Stephen Franken.

Those two golfers finished tied for first after 36 holes at 140 and headed to the 10th hole for a playoff, which Cover won when he hit his approach shot on the par-4 hole to within 2 feet for a birdie.

“I really didn’t know where I stood coming to the 18th hole,” Cover said. “I was under the impression I had a three-shot lead and I kind of took the hole for granted and made a bogey. I had to then regroup and think about a playoff. That approach shot was probably the defining shot of my career so far; the most clutch shot I’ve hit in my life.”

It was sweet redemption for the senior, who was disqualified from the West Regional and almost cost his team a spot in the state championship by signing an incorrect scorecard.

“I shot a 73 (in the regional) and I made a bogey on the last hole and the person wrote down a 4 instead of a 5 and when I went into the scorer’s tent I kind of looked real quickly and didn’t see it,” Cover said. “Lucky my other teammates played well because we ended up making it by one shot. After my first round here I looked over my scorecard about four times before signing it.”

“It was one of those stupid blunders we’ve all probably made when we were 17 or 18 years old, but it was something simple that you can let go,” added Hough coach Erik Herberth. “I’ve been saying for a couple of years now that Patrick is the most talented kid that I’ve had and it all finally came together for him. We had a plan going in and he really stuck to the plan. This was fun and it was so good to see.”

Alex Smalley of Wake Forest finished two shots behind Cover and Franken and in sole possession of third.

Pinecrest ended up eight shots off the pace for second place, while Hough and Charlotte Myers Park were another nine shots behind Pinecrest to tie for third.

Hough was nine shots behind Broughton coming into the second round but faded and wasn’t a factor over the final nine holes.

“We didn’t think much about sleeping on the lead,” Saleeby said. “We went back to Pinehurst and relaxed and had a good time, enjoyed the state tournament and enjoyed the time off of school. It was relaxing. We came out here and played loose and got it done.”

“We expected big things this year,” added Marlowe. “We said in our first team meeting of the year that this was our goal right here, so to come in and perform and do it, knowing we were expected to do it, I’m just ecstatic about it. We had 12 guys on our team play for us this year, that’s how solid we are.”

Ben Griffin of East Chapel Hill, who had won the individual crown in 2011 and 2013, did not qualify in his senior season despite shooting 71 in the regionals.