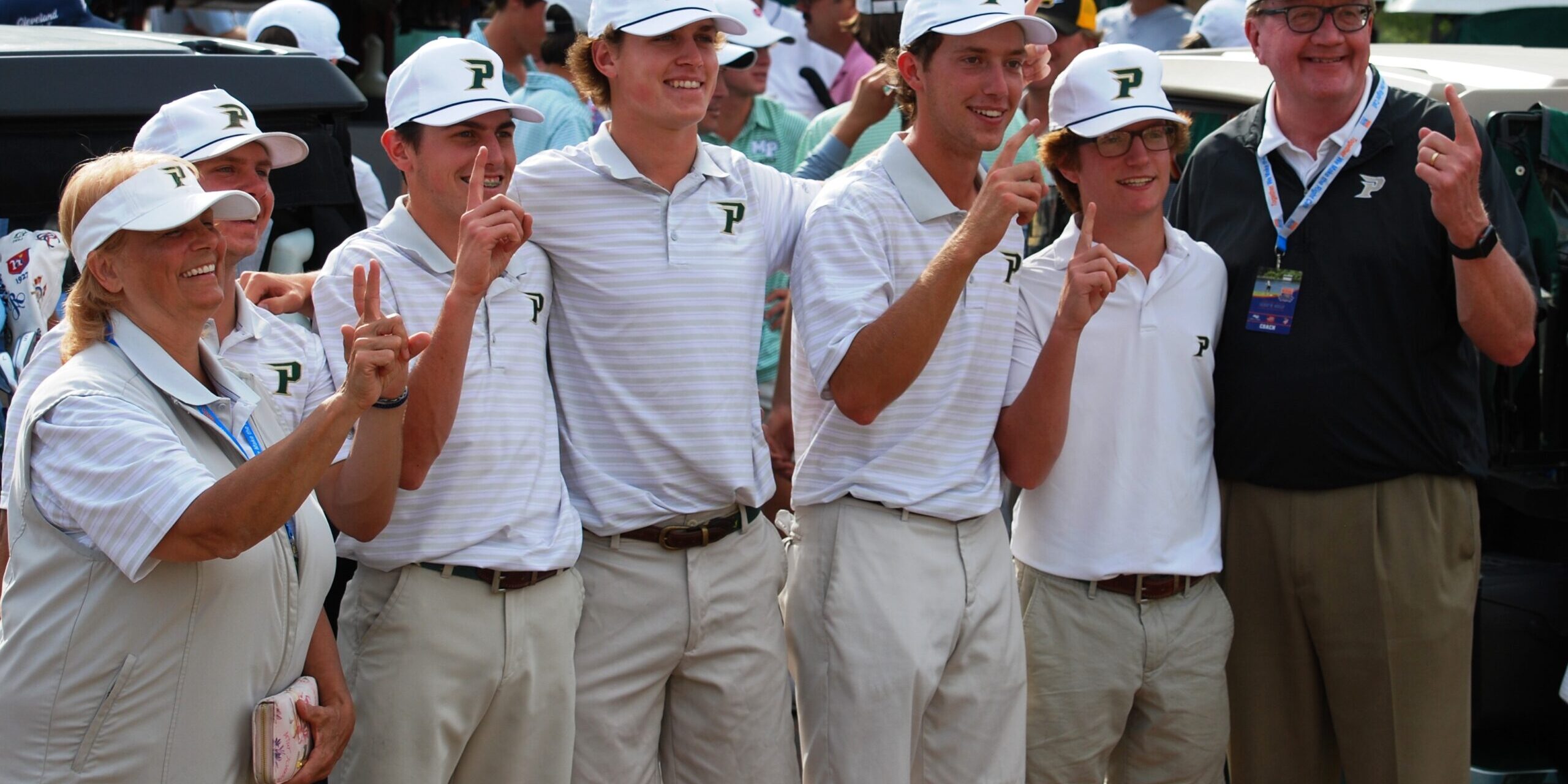 Jackson Van Paris has been one of the nation’s top junior golfers the last few years, accustomed to handling pressure situations. So, heading to the 18th hole at Pinehurst No. 2, needing a par on one of the hardest holes on the course to secure the North Carolina 4-A high school men’s championship, wasn’t all that daunting.

Clinging to a one-shot lead in the final group of the day, Van Paris ripped a drive into the fairway, hit an 8-iron to the middle of the green, and then proceeded to two-putt to  capture the prep individual crown as a senior as well as leading local favorite Pinecrest High School to its fifth team title since 2013.

“Jackson is very seasoned and he just knows how to win it when you need to win it,” said Pinecrest coach Lynn Beechler. “He comes through when you need him to come through.”

“Playing in big tournaments and being in a situation like that before helped,” Van Paris said about his approach into the 18th hole. “Actually, playing for a team gets me much more nervous than playing for myself. But having the experience before and playing in tournaments where I had the lead or I’m close to the lead coming up 18 I was able to look back on those and say to myself, ‘You’ve been here before, you know what to do, you’ve learned from your experiences.”’

Van Paris shot an even-par 72 to edge Hampton Roberts of Panther Creek and 9th-grader William Webb of Raleigh Broughton by one shot. Robert Gefaell of Winston-Salem Reynolds, who was 3-over-par, finished fourth.

As a team, Pinecrest shot 20-over to beat Reynolds by 11 shots. Charlotte Myers Park finished in third, 14 shots off the pace.

Van Paris won a state title in the 8th grade while at The O’Neal School, a private college prep school in Southern Pines, and two state team titles there, but decided to transfer five minutes down the road to Pinecrest for the 2019-2020 school year. However, the state championships were cancelled last year because of the COVID-19 pandemic.

“We had a good team and we thought we had a really good chance to win it all last year,” Beechler said. “So, this year was like redemption. With COVID everybody feels like they missed something last year. To us, it felt so good to be there at the end and to win. For everybody to just play golf and be here was such a blessing. For our kids to become a part of history at such an historic and special course — that is so loved by Pinehurst — is just a great feeling.”

Van Paris had played Pinehurst No. 2 more than two dozen times over the years prior to the state championship, but the 15-year-old Webb’s experience on the Donald Ross gem was confined to a practice round just two days prior to the state tournament.

“He came home and said ‘wow, that was the hardest course I’ve ever played,” said father Woody Webb. “He kept score and all he would tell me was that he broke 80. But I’m sure just playing that practice round saved him 5-6 shots, and maybe more.”

In fact, the youngster was leading heading into the final hole four groups ahead of Van Paris and poised for a major upset, but missed the green to the right, short-siding himself, and he would eventually three-putt for a double bogey.

“I didn’t think about being a ninth-grader, I just went out and played,” Webb said. “What I love about golf is you can grind for as long as you want, and get to play courses like this.”

Webb shot a 66 at Cutter Creek in regional play.

“He works hard at it, works every day, and he likes the big time, he really does,” said Broughton coach Steve Smith. “I told the other coaches they are going to get tired of seeing this young man.”

Van Paris had gotten word from the Pinecrest coaching staff of Webb’s troubles on the final hole as he prepared to tee off on the par-3 17th hole with a slim lead.

“When I heard that I started trying to play a little conservative, and didn’t do a great job of that on 17,” he said. “I hit it in the bunker and then I made a mess of that hole. But on the 18th hole I hit a great drive and then put it in the middle of the green so it made the walk up 18 feel a little bit better.

“It was a grind, and even if I would have had my absolute best stuff it still would have been a grind on Pinehurst No. 2,” Van Paris said. “I was pretty proud of the way I hung in there. I hit a few shots that I feel like I don’t normally hit too often, but overall I played great. More importantly, to win it as a team was an even better feeling.”

In the end, the Van Paris transfer to Pinecrest paid off as he’ll play college golf in the SEC at Vanderbilt.

“I can’t wait for college golf; hopefully it will be a lot like this, playing for a team on a pretty big stage,” said Van Paris, who plays out of the Country Club of North Carolina.

“I have put in a lot of work,” he added. “It is one of those things that I kind of dedicated to the sport of golf the last few years and these are the moments you practice for, and the reason anybody who plays in these types of tournaments practices for and works hard all the time, to get a feeling like this. To know that my hard work is paying off is amazing.”

Van Paris will now hit the amateur circuit over the next few months before heading off to Nashville, playing in events such as the Sunnehanna Amateur, Northeast Amateur, North & South Amateur at Pinehurst and U.S. Junior Championship on his home course this summer.

“Coming to a school with a bunch of great players took the pressure off of me,” Van Paris said of Pinecrest, which went undefeated this season. “They made me better, which is the coolest part. We all want the best for each other and they were all extremely supportive, so to come into this type of culture made it so much easier.”

“We all came together as a team — it’s not just Jackson,” Beechler added. “But Jackson has a commitment, a desire to win deep inside. And he produces.”