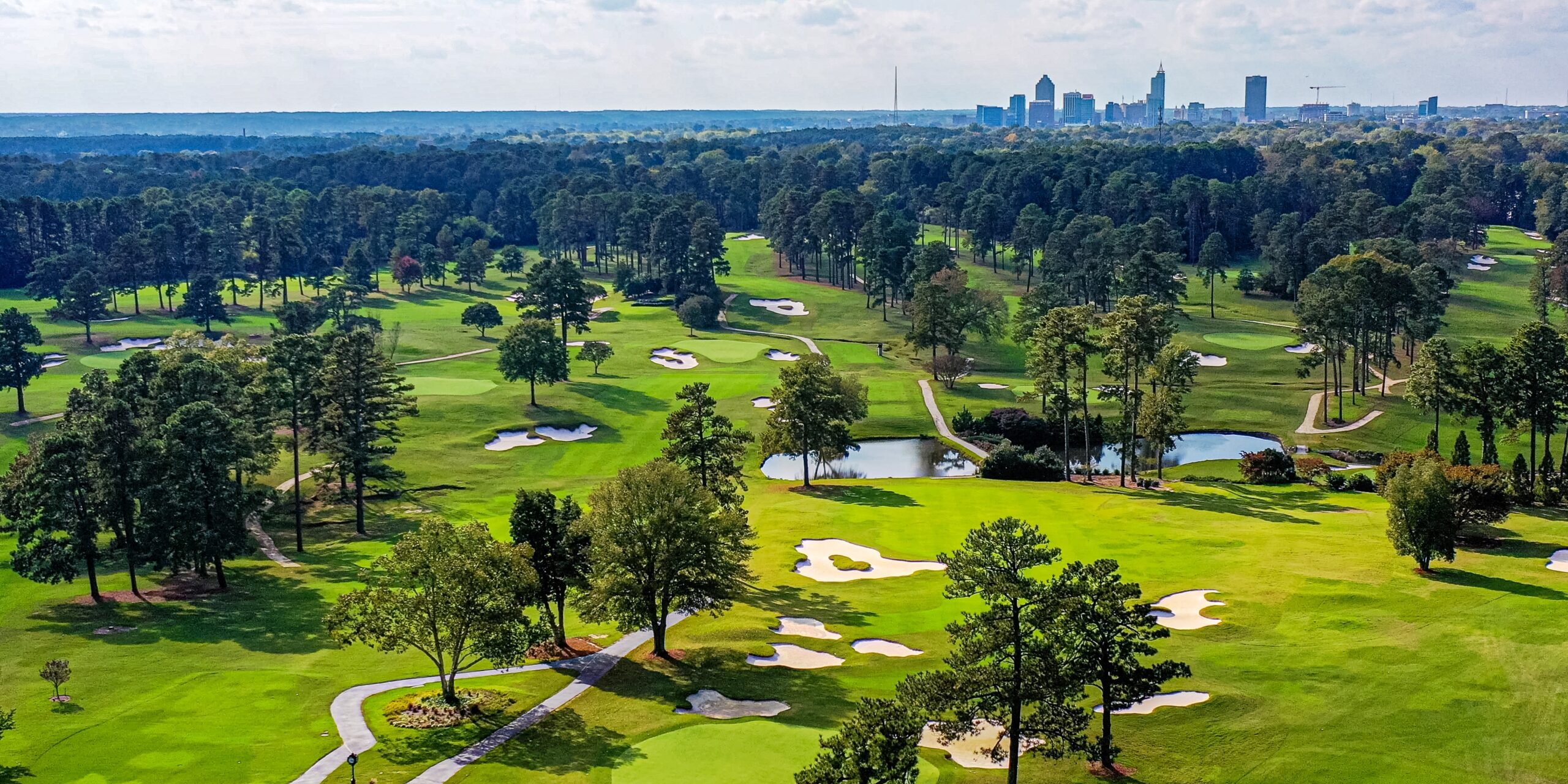 John McConnell has spent upwards of $100 million over the years compiling one of the nation’s most impressive private club portfolios. A good portion of that cash has been spent on the company’s anchor facility – Raleigh Country Club – from its $7 million rescue from bankruptcy in 2003 to a bunker and greens renovation to one of the state’s most impressive practice and short-game areas.

The latest “re-imagining” by architect Kyle Franz of the final layout of designer Donald Ross has come with a $5.5 million price tag and plenty of worthy fanfare that could catapult the course into the state’s top 10 rankings.

As McConnell gazed from the club’s veranda, eyeing his latest successful capital improvement project, he admitted the new open look was quite stunning.

“It’s very interesting when I bought this club I couldn’t stand the openness because I would see people on every green, so we made a major investment in shrubs and ornamental trees and grasses to try to keep the vision on each hole,” said McConnell, the founder of Raleigh-based McConnell Golf. “Now, I’m saying ‘Man, I was wrong on that. I should have come in here and cut down more trees on the front end.’ This really opens up the view, you see the whole course, see places now on every hole that in the past you have not seen, especially with the new sand traps, which really pop.”

Franz, whose renovations have included Mid Pines and Pine Needles resorts in the Sandhills, removed hundreds of trees to create an expansive, open feel. You can see upwards of a dozen holes now from the clubhouse, which is the highest point of the property in Southeast Raleigh.

On the greens, McConnell Golf elected not to use bermudagrass but a new variety of bentgrass called Pure Eclipse, which allows improved heat tolerance from previous varieties. RCC has become the first course in the world to seed this grass on all 18 holes.

“The color of the greens looks better than Crenshaw bentgrass, which was previously the grass of choice both here and at Treyburn Country Club north of Durham,” McConnell said. “These greens look better to me. We’ll see if we’ll be visionaries or will be changing our philosophy. It won’t take long to figure that out.”

McConnell Golf VP of Agronomy Michael Shoun and his team scouted out the new grass at Pure Seed Testing and took dozens of trips to the Rolesville sod farm in order to pick a bentgrass that would hold up in the summer heat of central North Carolina.

“Billy and I would take the 15-20 minute ride and go up there and look at what turned out to be Pure Eclipse in the spring, in the summer, just to look at the different grasses,” Shoun said. “A lot of times Dr. Fraser would not tell us what we were looking at. She would say, ‘You go pick out which one you think is the best.’ There are so many different plots, all in 4-by-4 squares, and she may have Pure Eclipse in 5-6 different places. Every time we went up there the Pure Eclipse plots always seemed to look the best, color-wise, and handled the mowing.

“She told us flat out that she has been doing this for 38 years and she had never had a bentgrass of this quality,” Shoun added. “Coming from somebody who is that much of a specialist it meant a lot to us.”

Alamance Country Club, which undertook a greens renovation project this summer, has also settled on Pure Eclipse and will be the second course in the world to open with all 18 holes featuring the new bent, Fraser said.

“New varieties of grasses always get a lot of interest, but that interest takes off once somebody does plant it,” Fraser said. “That was the thing about Raleigh Country Club, I always had the idea from them that they weren’t concerned about being the first to do something. If they felt like it was the best grass they were going with it. It is kind of a big step for somebody to be the first to plant this, especially when you’re talking about your greens. But that didn’t concern them; they just wanted what they felt like would perform best for them.”

“When they come up here enough times they started to gravitate toward one grass,” she added. “And Pure Eclipse hasn’t just performed well here, it has been in national tests so it has been evaluated all over the country and has done well. Yes, RCC is taking the plunge.”

Of course, foot traffic will be one of the key tests with the new bent early on, but so far Shoun has been extremely pleased with the grow in.

“We felt like we could give John (McConnell) the best putting surface with bentgrass,” Shoun said. “Not that Bermuda is not a great surface, but to me bent just seems to roll better, especially when you are looking at older greens — like Ross greens — the bent seems to be truer when it comes to the breaks. It was a great decision, and we believe we’ll be able to supply some of the best greens in the area like we always have.”

In addition, the focus of the Raleigh Country Club project was to produce an improved course for all levels of players — retaining the integrity of the layout that Ross first designed and built, but allowing more challenges for today’s long-hitting players. Among RCC’s numerous enhancements:

“A machine tills whatever is existing — be it old path, soil, roots — and incorporates cement and water to create a soil surface,” Shoun said. “The final product is 8 to 10 inches of a soil surface that takes on the natural look of the material tilled. It’s call ‘natural path’ — not meant to be a perfectly smooth surface, more like a hard soil path.”

After being closed for more than six months, RCC opened to its members and guests the first weekend of November.

“It has been neat to see Kyle’s vision take shape,” said McConnell VP of Golf Operations Brian Kittler. “The golf course is definitely going to be a bit more challenging. The fairway corridors are a bit wider; greens are a bit bigger and members will have an opportunity to hit to other pin locations that previously were not available. With all the trees gone, it gives the holes much better views and better pin locations on some holes. It’s got a good vibe going.”