A Perfect Package: A look inside one of the state’s most successful golf merchandising operations 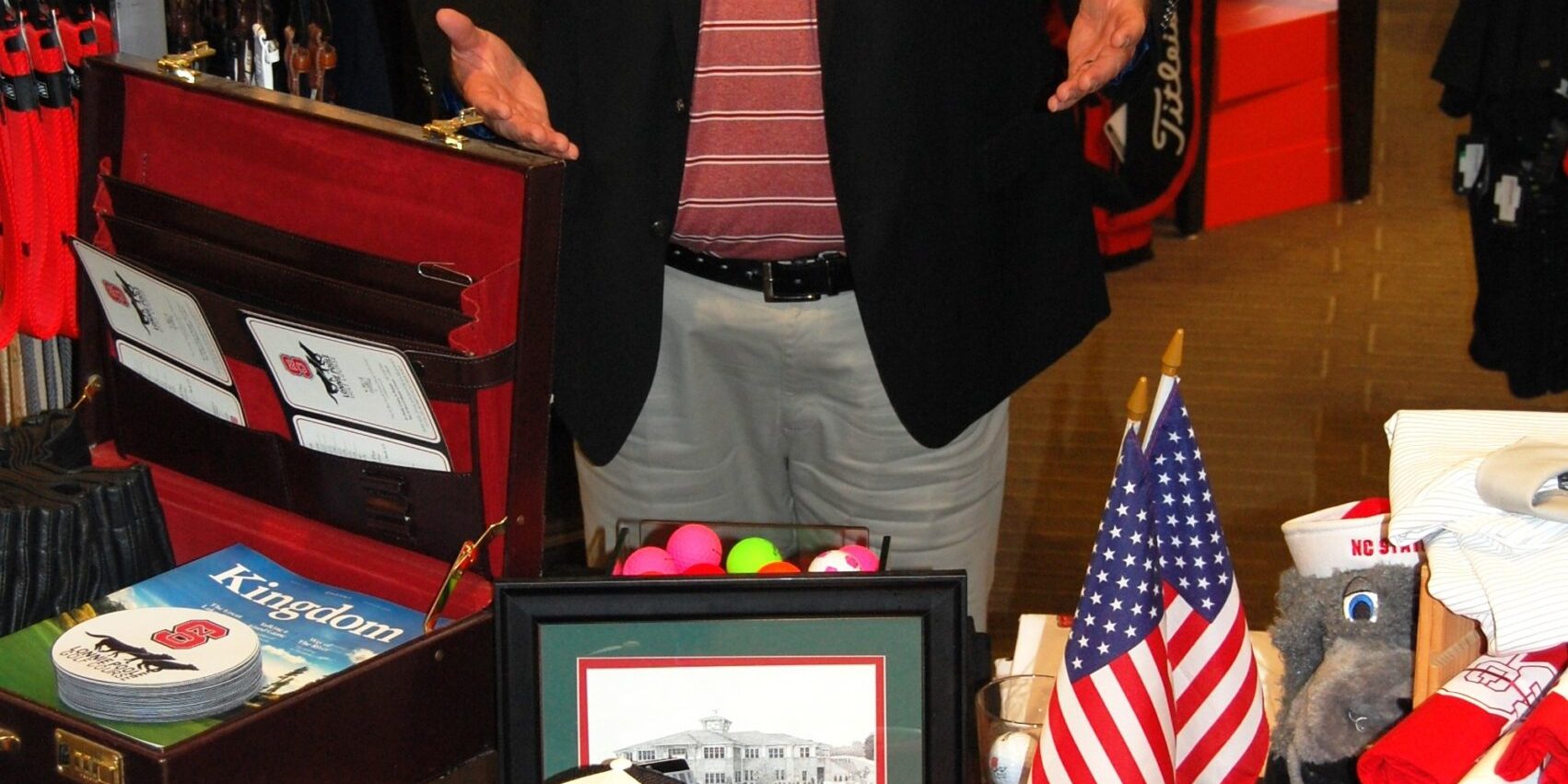 By David Droschak
There was quite a buzz surrounding the opening of Arnold Palmer’s only college golf course design in the world. But I’m not sure if folks lined up more than 100 deep a decade ago in the dark at 6:30 a.m. jockeying for position at Lonnie Poole Golf Club.
That’s what will take place on Dec. 7, the date of North Carolina State’s 50 percent off merchandising sale that has now become a big-time golf tradition in the Triangle.
So just how impressive is this one-day-only – staged from 7 a.m.-7 p.m. — “Lucky 7s” mark down? Sales from the 12-hour holiday shopping spree totaled more than $40,000 last year, according to general manager Chip Watson.
“People have heard about it and they now set their clocks by it,” Watson says. “There is nothing really held back. We might run out of golf balls in the first hour because they are available but they are in the sale just like everything else. People are lined up as far as you can see just to get in the clubhouse. It’s pretty amazing.”
The merchandising operation at Lonnie Poole has come a long way since the course was opened in a trailer for the first five years before a beautiful clubhouse was built.
Even then, though, Lonnie Poole was the best-stocked golf trailer in the state, with numerous lines of clothing, shoes, balls and clubs crammed into a small space.
Once Watson was given a larger area to operate, his expertise as an executive for more than three decades with the Carolinas Golf Group began to shine. He and his staff were once again nominated as a finalist for Carolinas PGA merchandiser of the year in 2019 in the public course category.
Merchandising sales in Lonnie Poole’s first year were $170,000. This year Watson expects that total to be close to $700,000.
“The merchandising here is exciting because you know you can try different things because of the different markets,” Watson said. “Something I would never buy as a 52-year-old guy may be eaten off the shelves in a minute by a bunch of freshmen students.”
While the clothing lines and variety of items in the pro shop is impressive, a lot of the bump in sales in the last three years has come from the club side of the business, with Lonnie Poole featuring the Player Development Suite, headed by Daniel Spurling. It is a one-stop shop for tour-level custom fitting, club repair and alterations.
“We have worked hard at it and have a lot of major vendors in here with shafts that other clubs can’t get,” Watson says. “We remain one of the Top 25 elite club fitters in the country as rated by Golf Magazine. There are only two golf courses on that list and the other one is in Colorado. Everyone else on that list is a specialty shop.
“We’ve got college kids from other teams that are coming here to get fitted. And anytime we have a collegiate tournament we have college coaches whose mouths are watering saying, ‘You mean my team can come and get fitted here?’ Absolutely, I say. We have touring pros who come around, too. I had Freddie Couples come by last week to have his clubs worked on. That’s the kind of reputation we’re getting for doing it.”
Lonnie Poole now has eight different alternative logos to choose from – possibly a world record for a golf course. But it is that type of variety – along with more colors than just N.C. State red – that sets apart this operation from others in the golf merchandising business.
“I’ve learned a lot through the years when our management company owned all the golf courses that we managed,” Watson said. “We had a central person who did the buying, and yes pricing was good and we got better deals because of the volume we ordered, but it did not work. It works on things like golf balls because it’s the same in every place, but one shirt didn’t work in the mountains but it did at the beach; one shirt may work at a university and at another place it won’t. It took away a lot of the freedom of the golf pros who were on site and we were doing ourselves a disservice by centralizing it. That was a hard lesson to learn — that you have to have buy-in from your staff. You have to let them let them order almost everything.”
Watson still laughs about a promotion the NFL ran while still working out of the trailer featuring the colors of the league’s teams. He was shipped an order of 48 Carolina Panthers logo shirts.
“They were about as Carolina blue as you can get,” Watson says. “I wanted to send them back. But to this day that’s the No. 1 seller that we’ve ever had. We can’t get any more because the promotion is over but we blew through those 48 shirts in no time.”