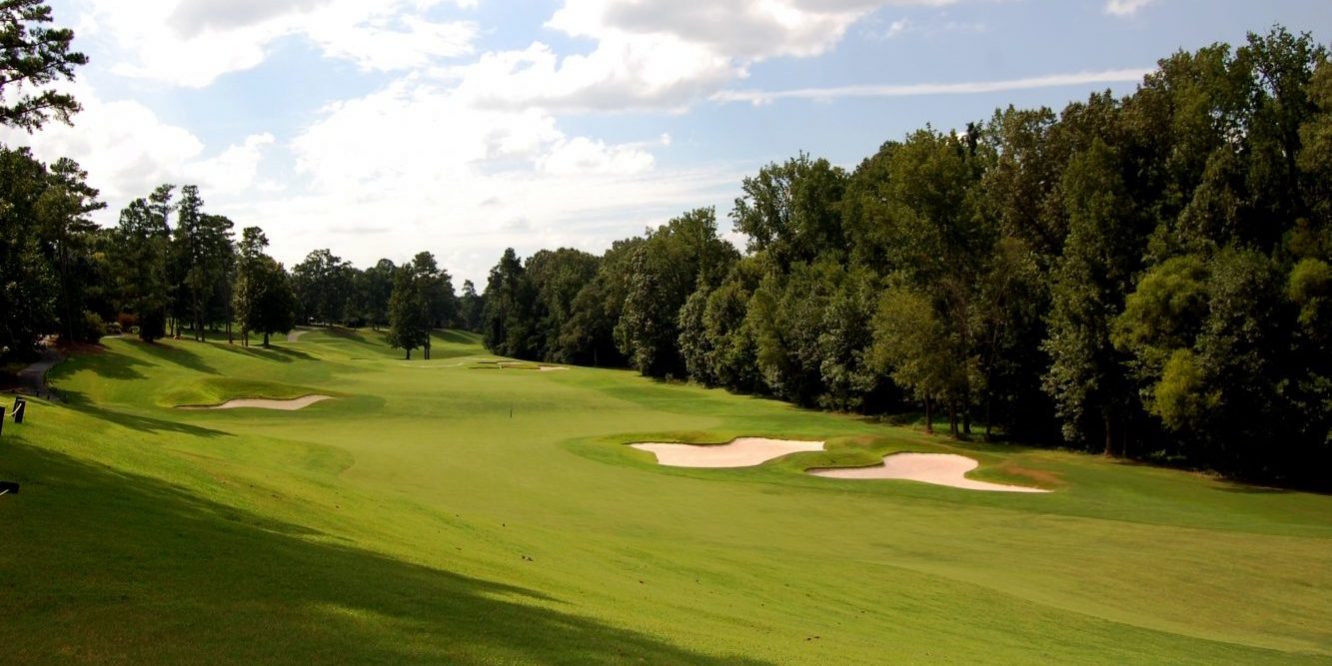 Whether you subscribe to the theory of global warming or just the luck of the summer weather draw, the dog days of August across central North Carolina have been getting hotter and hotter much of the last decade.

The intense heat and accompanying humidity have played havoc on bent grass greens across the Triangle, leaving large patches of dead spots, root rot and massive humming fans that run up the power bill trying to cool down the “cool season” grass.

Golf course owners have heard the rallying cry from local golfers that bemoan the higher mowing pattern on bent grass as superintendents try to keep the grass alive in the summer months.

Now, a record number of area courses – five in all – have decided to spend the $250,000-$350,000 price tag this summer to replace their bent grass greens with the latest heat tolerant Bermuda.

The list includes The Neuse in Clayton, Wildwood Green in North Raleigh, Hasentree in Wake Forest, The Challenge in Graham and Belmont Lake in Rocky Mount.

Most agree that it comes down to dollars and a whole lot of sense to make the conversion.

“Just look at the number of rounds and do the math,” said Wildwood Green owner Chip Watson. “If you have bent grass greens in the summer your rounds are probably going to go down. Say 10-15 players a day that may not play and take that number over a 2 ½ month period, and say you lose 1,500 rounds that we can attribute to having bent grass greens as opposed to Bermuda. Just put a dollar amount per player on it. It will be the reverse in the winter but it will be a lot less because the daylight is less and the weather is not as good anyway.

“At the worst case it’s a seven-year payback and that’s not even considering you can probably go up in your price and you can pump the rounds in the summer as much as you want,” Watson added.

Tim Wilkie at Belmont Lake has been in the golf industry for more than 40 years and agrees 100 percent with Watson.

“It’s like anything, people are always looking for more efficient and better systems to take care of things,” said Wilkie. “With golf, our environment has changed, they talk about global heating and I do think our weather has gotten more severe in terms of heat, so you have to be open to change and flexible to conquer the beast because you know how the beast tends to spread out if you’re not paying attention.

“It was an absolute no brainer and it was a move we needed to make. We just bit the bullet. We have a wonderful, proactive owner who is so supportive of this. We’re getting it done and it’s efficient, so now we only had two bad summers instead of a number of them.”

Here is a look at each of the courses making the conversion to Bermuda grass greens:

Clayton’s population increased by 131 percent from 2000 to 2010, and is expected to rise another 25 percent in 2017, so general manager Stew McComb can’t wait to unveil his new greens to an eager audience.

The Neuse started construction June 5 and the grow-in has been so aggressive that McComb believes a member appreciation event by Aug. 19 is not out of the question.

“Having a newer product to resale to folks who maybe have lost a little faith in us because of how the greens were deteriorating over the years is huge, but the bigger impact is the growth in Clayton,” he said. “With the activity that is being developed out here there is a lot more traffic than there was three years ago, five years ago, and that is really great.”

“Part of that recovery mode is getting the old folks back, but when the new folks come in and see the place I think the word out on the street is going to be ‘hey, you’ve got to come and check out The Neuse.”’

The ClubCorp property was designed by John LaFoy and is worth playing just for the 192-yard 14th hole, a par-3, which is framed by a series of rocky outcroppings and lake that makes you feel you’re teeing it up in the North Carolina mountains, not Down East.

“The Neuse is a fantastic layout,” said Steve Ostroff, ClubCorp regional director of golf. “Breathtaking views and rolling terrain with undulations makes this a must-play course. The Raleigh market is growing so rapidly and ClubCorp now has three fantastic golf course offerings, and each property will have new greens built within the past five years. This shows our commitment to this exciting golf market.”

The Carolinas Golf Group was involved in a greens conversion at Deep Springs in Reidsville last summer, but this approach was somewhat unusual for a public course. Watson’s management and ownership group, which includes with father Roger Watson, involved the membership as part of the funding arm of the project.

The Wildwood Green construction began June 27 and is expected to be completed by Labor Day.

“We started last fall talking about it and polling the members,” Chip Watson said. “The members stepped up to the plate. We came up with a whole plan with a Champion member type plan; they could contribute and basically pay their dues in advance for one year, three years, five years or a lifetime to contribute. And they have a whole list of other benefits and discounts and their dues are frozen for a period of time.”

Watson said around 200 members contributed to the greens conversion.

“We were able to get the members on board and we didn’t have to borrow a lot of money to go out and do it,” Watson said. “We are all kind of in it together, so to speak. It has been exciting.”

Wildwood Green also added a much-needed practice green near the driving range. Previously, golfers had to cross the street from the range to warm up, and then walk back across the street to the first tee.

“Now you’ll be able to roll a few putts and be ready to go. And it’s great for camps and clinics, too,” Watson said of the new practice green, which is now open.

The Wildwood Green membership even found a way to embrace the temporary greens in place until the new ones are complete.

“A lot of people like it because it’s fun,” he said. “We had a ‘Set the Course Record Day’ and we had people who set the course record who never would have the course record. We kept some social events going.”

The Challenge has been closed since the spring and is scheduled to re-open to the public Aug. 5.

Built in 1996, The Challenge has converted its greens from bent to Bermuda grass, and redefined its fairways, among other improvements under owner Richard Belton, a local businessman and golf enthusiast.

The course also has a new logo, said general manager and director of golf Todd Smith.

“When somebody played here before we closed and when they come out here again we want them to see a noticeable difference — from the appearance of the entrance to how they are treated in the pro shop to their experience on the golf course,” Smith said.

“It was real easy for us to do, we really had no choice,” Smith said when asked about having to close the course for three months. “There have been a lot of different owners but Richie is committed to making this a fantastic golf course. We talked at the beginning of the year that this absolutely had to be done to bring us up to the level we need to be. We needed some kind of catalyst to turn things around.”

Smith said ongoing work will continue on the Challenge’s bunkers and railroad ties that add a unique touch to the layout.

“We’ve had just a huge punch list that we’ve been knocking out all summer,” he said.

This exclusive Tom Fazio-designed private course is just a decade old, but owner Toll Brothers says it’s showing its continued commitment to providing world-class amenities to their members with the new greens project.

Carter points out that Champion Bermuda is drought tolerant, leaves fewer ball marks on greens and provides consistent putting surfaces throughout the year for players. And Champion also features a no-till renovation process that allowed for renovation of the existing greens at Hasentree without reconstruction.

This project began July 12, and beside from the sprigging process, was all done in-house with the expertise of Wilkie and superintendent David Coley.

“It took about four full days, nine of us to really work on those greens to get them ready,” Wilkie said. “You need a knowledgeable greens superintendent, which we have, and you just have to get a process going, and as you went on everybody got a little more efficient. And then after the sprigging got done for the next 10 days we had two guys going out every 20 minutes to water the greens all day long.”

“When we were trying to open in 2007 it was getting later in the summer and they had not planted the greens yet so Bermuda grass wasn’t going to grow in at that time of the year and would have been dormant until March or April, so that was why we ended up having the bent grass. I love the bent grass and if we had electricity on the golf course I would have been a proponent to stay with it but it’s hard if you get summers like last summer when it was hot, wet and humid with a terrible heat index and no wind. The weather was just totally against you.”

“We have no means to cool them off,” Wilkie said. “Last summer it was a steam bath here.”

Wilkie says a target date for project completion is the end of August.

“That might be saying we’re optimistic, but at the rate they are growing right now it’s all positive,” he said.