Fitness and fun for juniors at Wakefield Plantation 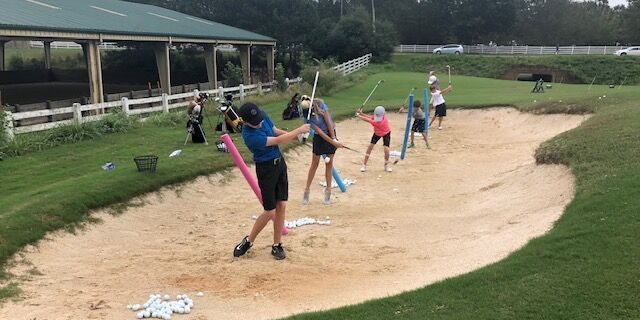 Mastering fundamentals has long been at the core of junior golf, followed closely by making the sport appealing to kids. But the pros at Wakefield Plantation are taking things to the next level with technology, fitness and contagious enthusiasm.

In so doing, they have not only doubled the size of the program but are paving the way for golf’s next generation.

Under the guidance of Wakefield’s director of golf Adam McLaughlin, his assistants Monique “Mo” Gesualdi, Ryan Vance, Matt Brennan and teaching professional Erica Britt, Wakefield’s junior program runs year-round and totals about 100 players. Within that junior golf program, the club’s PGA Junior League program is up to 56 participants and four in-house teams, while the Wakefield Junior League has grown to more than 60 young golfers.

“The combination of fitness training and golf technique is often overlooked by junior golfers,” says Jason Butcher, whose 14-year-old son Jace has competed in national tournaments. “Many juniors, my son included, can’t practice properly because of physical limitations due to a lack of strength or mobility. This program emphasizes the importance of both, and keeps it fun.”

“We have a really solid group of junior golfers,” says Gesualdi, an accomplished former Furman University golfer, who adds that her passion has always been junior golf.

Gesualdi points to 14-year-old Lily Kate Watson. “She has a lot of potential that we are working on unleashing and will be one to watch.”

According to Lily Kate’s father, Josh Watson, the golf fitness program has been a wonderful experience. “Not only has the high level of instruction helped to improve her game, she’s also really enjoyed connecting with the coaches and players,” he says.

Lily Kate echoes her father’s sentiment: “As a female junior golfer, I feel so fortunate to be a part of a club that supports high-level golf instruction for both boys and girls.”

“The Junior Golf Fitness Program is great because it works on sharpening the kids’ golf skills while also teaching them how to stay physically healthy for the sport,” says Christian Adel, Isaiah’s dad.

“Mo and Drew keep it entertaining, with some friendly competition mixed in, which the kids always enjoy.”

Gesualdi says Dylan Johnson, who recently turned 12, possesses the “smoothest left-handed swing” she has ever seen. Dylan’s 2017 club championship scores were 87-89, and in 2018, he shot 76-82 — 18 shots lower over two days in one year. Other rising stars include 10-year-old Chase Duncan, who had his first hole-in-one at age 9 and competes on the regional and national level. Ten-year-old Cooper Pleasants, in the Junior Golf Fitness program, is newly competing but has great athletic ability and will be one to watch as he continues to develop his game over the next few years. Gesualdi also points to 8-year-old Harrison Hunt, who has yet to play tournament golf, but exhibits a “great, natural swing.”

Beyond an increase in skill for these juniors, both parents and players agree that it’s the camaraderie among the kids that’s just as important. “The connections our kids are making with other juniors makes the whole process seem more like fun, less like work,” says Erik Johnson, Dylan’s dad.