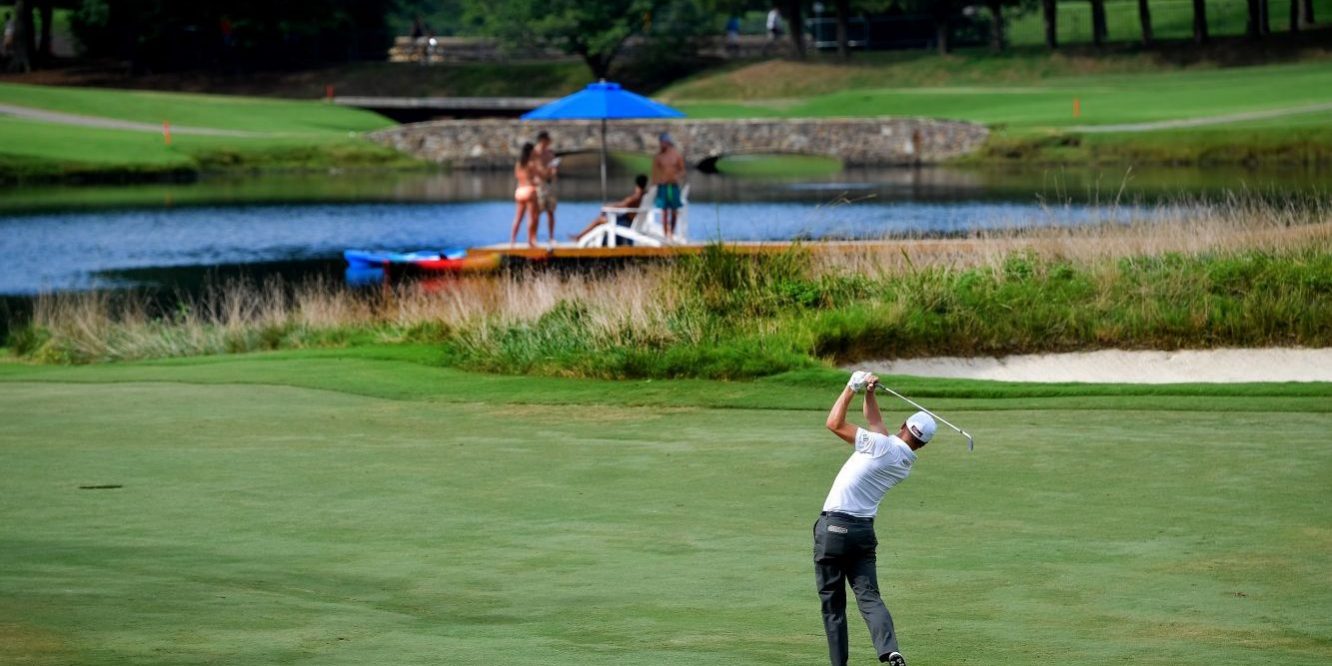 Two sports that some don’t even consider to be sports, one involving taking your life in your own hands driving high rates of speed around a track; the other trying to use as few a swings as possible with a stick to hit a little ball resting stationary on the ground in front of you.

In fact, their differences may be what bring the two sports together. Turns out there are a growing contingent of NASCAR drivers who are avid golfers off the track, using the “other” sport to relax from their often-stressful professional careers.

One of the leaders of the pack is Charlotte resident Kevin Harvick, a veteran driver and the 2014 Cup Series champion. On Monday, Aug. 14, for the eighth consecutive year his Kevin Harvick Foundation jumpstarts Wyndham Championship week at Greensboro’s Sedgefield Country Club by hosting a Pro-Am, presented by Technology Concepts & Design, Inc., and BB&T, to help underprivileged children.

Harvick and his wife, DeLana, a native of Kernersville, started their foundation in 2010 after a NASCAR fan poll gave Harvick a zero on the humanitarian side.

The mission of the Kevin Harvick Foundation is to support programs that positively enrich the lives of children throughout the country. In 2013, as part of a continuing effort to support athletics at Harvick’s alma mater, North High School in Bakersfield, Calif., his foundation presented the school’s boy’s and girl’s golf teams with a donation of 21 sets of new golf clubs, golf bags, putters and team apparel.

Harvick said events such as the Monday Pro-Am during the Wyndham Championship week have helped raise hundreds of thousands of dollars for good causes from North Carolina to Northern California.

“Mark Brazil, his wonderful team at the Wyndham Championship and Bill Johnson of Technology Concepts & Design go above and beyond to lend a helping hand for so many children in need,” Harvick said. “I have gotten to know several members of the golf community fairly well in recent years, and have been amazed by their generosity and overwhelming support. The Kevin Harvick Foundation couldn’t do the work we do without the generosity of groups such as this.”

Since taking up golf about a decade ago, Harvick has become so addicted that when the California native moved to Charlotte, he built a par-3 hole in his back yard that is a replica of Augusta National’s iconic No. 12 hole.

Harvick said golf is therapeutic for him, “to go and do something totally different” from racing — which is why he can often be found in the early evenings hitting balls in the backyard with his 5-year-old son, Keelan.

“I don’t know that I can 100 percent blame it on Keelan, but he was definitely part of the excuse to convince Mom that we needed to put the golf hole in the backyard,” said Harvick, who said he was inspired to replicate No. 12 after attending the Masters a few years back and later playing a round at Augusta National.

So who is the best golfer among the NASCAR drivers? Well, if the results from the new “Golf Guys Tour” — made up of 16 NASCAR drivers, team members and broadcasters — are any indication, that would be Denny Hamlin, who also happens to be one of the sport’s leading drivers.

Calling themselves “the most frustrated amateurs on tour,” The Golf Guys Tour boasts its own Twitter account (@TheGolfGuysTour) and website (www.thegolfguystour.com), which sells merchandise, and posts results and photos.

Hamlin won the tour last year and already has built a large lead in this season’s standings as well.

“I’m the best golfer,” said Hamlin, a member at The Peninsula Club just north of Charlotte, where he plays to a 4.2 handicap. Hamlin estimates he plays as many as 90 rounds a year. When he’s not on the course or the track Hamlin has a full-sized golf simulator in his home.

“As soon as I started racing, I started playing golf,” he said. “A lot of the crew guys would go play on their time off. I really didn’t have any other sports that I did growing up, so I took it up and went out for a few rounds. The next thing you know, I kind of got addicted to it. I enjoy the challenge. Hopefully I’ll play a lot more once I retire.”

During racing season, Hamlin said he and other drivers regularly tee it up following Saturday practices. He competed in this year’s Diamond Resorts Invitational — featuring legendary PGA Tour Champions, LPGA stars and over 40 celebrities from the world of sports and entertainment competing for their own prize purse. Hamlin finished 29th out of 47 celebrities.

He is renowned among his fellow competitors for his putting. One professional golfer’s caddie called Hamlin “possibly the best amateur putter” he had ever seen.

Hamlin said one of his fondest golf memories was last year’s Wells Fargo Championship Pro-Am, where he and former FedEx CEO Mike Glenn teamed up with PGA Tour star Adam Scott to shoot 56 and win the event by two shots. “It was so crazy how well we played brother-in-law golf,” said Hamlin, who recently posted a video of himself practicing his short game on a plane.

One of Hamlin’s best friends and frequent partners on the golf course is Bubba Watson. Hamlin even caddied for his fellow left-hander during the Masters Par-3 Contest in 2012; the year Watson won his first of two green jackets.

Like Harvick, Hamlin has a foundation in his name and also hosts a pro-am. One of his foundation’s two biggest fundraising events of the year is the “The Denis, Denny & Mark’s Pro-Am Jam,” a golf and concert event held each October at Daniel’s Island in Charleston, S.C., co-sponsored by Hamlin, Hootie & the Blowfish’s Mark Bryan and entrepreneur Denis Gallagher. Last year’s fifth annual event raised a Pro-Am Jam record amount of $270,000, bringing the five-year fundraising tally to $990,000.

“Being on the verge of $1 million raised in only five short years is a testament to the generosity of all that support and participate in the Pro-Am Jam and the organizations it benefits,” Hamlin said.

Indeed, NASCAR driver David Ragan said despite what people might think, he sees a lot of similarities between his sport and golf.

“Golf is one of the sports — like NASCAR — that really hasn’t changed in how it’s played since its inception,” Ragan said. “They stick with a lot of the same procedures that have been in place since day one. Technology might help drive the ball farther on the golf course, just like technology helps give us more horsepower to go faster, but the core basics of the sport are still very much the same as they were when they first started.”