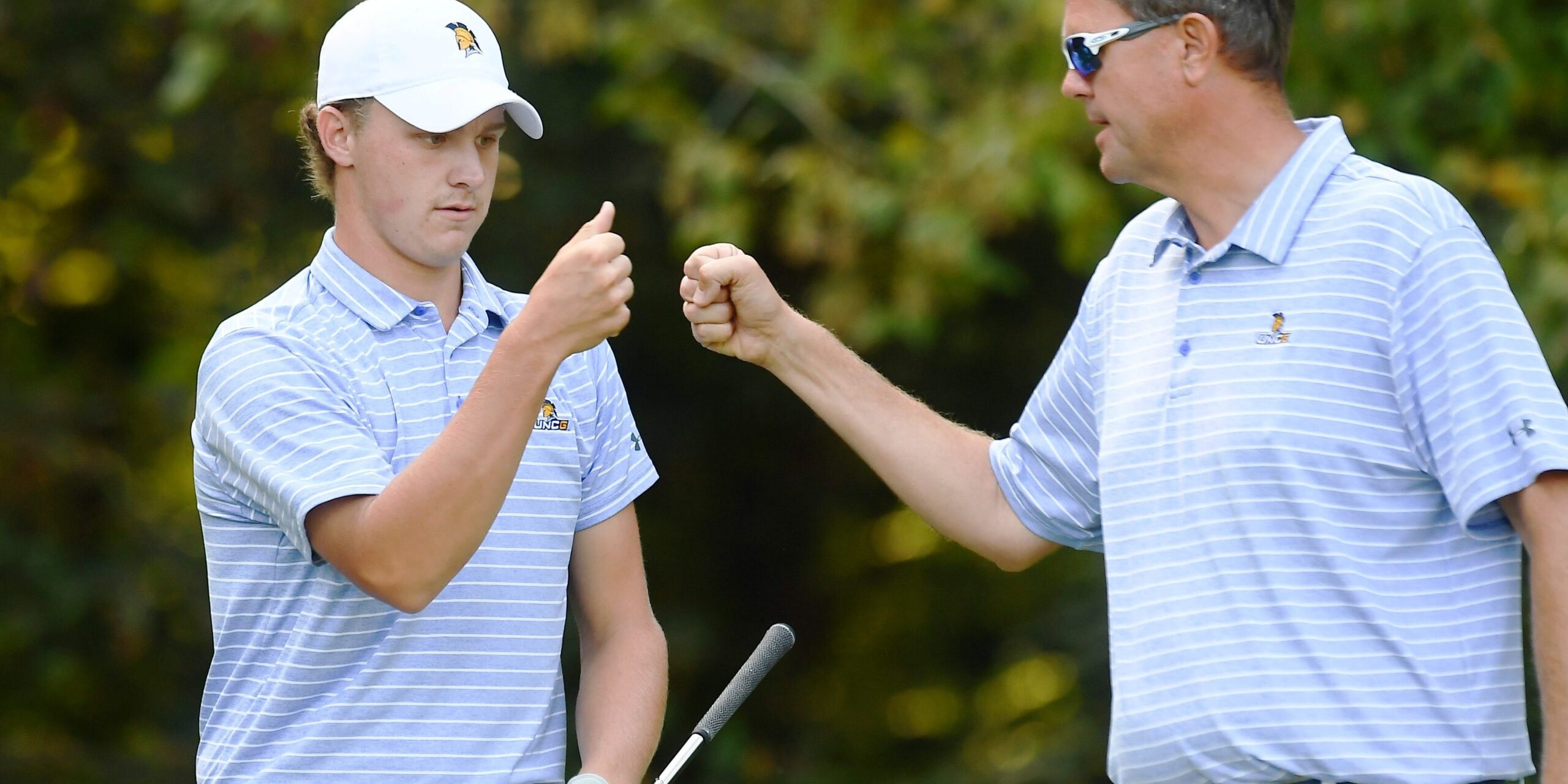 One could argue that North Carolina-bred talent on the PGA Tour has never been deeper with the likes of Webb Simpson, Brendon Todd, Harold Varner III, Bill Haas, Doc Redman and Chesson Hadley.

That fact is not lost on UNC-Greensboro men’s golf coach Terrance Stewart, whose 10-man roster is filled exclusively with home-grown talent from the Tar Heel state. Stewart has built a competitive NCAA Division I program against the likes of ACC schools Wake Forest, Duke, North Carolina, N.C. State without an out-of-state golfer since 2008.

“It’s not that we don’t look out of state, or we don’t follow up on players from Virginia, Texas or England, but there are just so many quality student-athletes right here in our own state that I just have not seen the need at all to sign somebody who is not from here,” Stewart said. “This is just such a golf-rich state; it’s not like its Iowa or someplace like that.”

Stewart chuckles when asked about his recruiting budget.

“We’re only spending about $2,000 a year total and most of it is on gas money and meal money and maybe a couple of hotel stays,” he said. “We’re not flying kids in here and we’re not hopping on a plane to go all over the country to watch these players play. Our program is an athletic director’s dream.

“I would be willing to bet that we are the highest ranked team in the country every year for what we spend to recruit our squad here,” Stewart added. “There are schools, like Kansas for an example, that doesn’t even have a budget, they can go anywhere in the world to look at players. We have beaten Kansas plenty of times at golf. And we’ve beaten every single ACC team in the state multiple times. We don’t have another sport at UNCG that plays the same type of ACC/SEC schedule on a daily basis, and doing it and competing very well with our very own, home-grown student-athletes.”

It’s not as if Stewart gets all of the major golf program leftovers, so to speak. He has recruited the state’s top player a half dozen times over his 19 years with the Spartans. However, most times Stewart began targeting those players well before they rose in the rankings.

“We really get on them before they become superstar players,” Stewart said. “We’ve only signed that No. 1 player in the state once when that player was already ranked No. 1 and that was Andy Knox. The other times those guys were ranked 5-to-20 in the state and then they got better their last 18 months of junior golf.”

“I got a phone call about Nick from one of the area golf pros who said he had this kid who was an elite student who was going to graduate as the valedictorian of his high school who was a very nice player but just wasn’t on the radar yet,” Stewart said. “I went out and watched Nick play once and I said ‘Oh my God, this kid is really good.’ He could hit every shot — he could chip, he could putt, he could work the golf ball. He was not long at all though, probably hitting it 260 yards at the time. But I fell in love with him.”

Stewart offered Lyerly a scholarship before he won the 2016 North Carolina Amateur, becoming the youngest golfer to accomplish that feat.

“But he still wasn’t getting many schools to watch him play because he was not one of these big, strong, strapping athletic types where you watch him pound balls like he’s Brooks Koepka,” Stewart said. “Coaches don’t want to pony up a lot of scholarship money for someone who has a little below-average length and just straight off the tee, but there was just something about Nick. Talking to him, talking to his parents, getting to know him personally I really felt like we wanted to make a very good offer for him to come here. We were absolutely thrilled for him to come to us. He just got better and better and has gotten long and has been a coaches’ dream.”

Lyerly has a 3.9 GPA and is majoring in biology, and is working towards his master’s degree. He is the typical golfer that Stewart has targeted – good player, good student and good people.

“The fact that we recruit so close to home, the fact that we can call all these golf professionals, call the CGA, call the junior tournament directors, and the fact that all my players know each other so well, it gives us a lot of evidence that we’ve got the right person joining the team,” Stewart said.

“They have to be real students. I have never used an admissions exception to get somebody into UNCG. If you can’t get in based on your own merits I’m not going to bring you in, even if you are some great player. That way we have good people, and real students, which odds are those guys are going to be in school four years, they aren’t going flunk out, they aren’t going to be doing stupid stuff that we have to get rid of them. And third, even if you are not some great player as long as you have a passion to practice and play and work at it properly that’s what we are really trying to bring in.”

Stewart’s network of contacts across the state serves him well, as does his dedication and ability to check out in-state golfers multiple times, meaning very few players “fall through the cracks.”

One such player is Jack Marcotte of Apex.  Stewart’s first time watching the Middle Creek High School golfer at the state high school championships at Pinehurst No. 6 did not go well.

“He was hitting houses off the tee,” Stewart recalled. “Look, it was not good, and frankly I just kind of wrote him off — guilty as charged.”

A month later at the N.C. Junior Championship, the UNC-G coach was following another player in Marcotte’s group but it was Marcotte who kept catching his eye.

“And there was one shot he hit that really gave me goose bumps,” Stewart said. “He was on a par-3, about 220-225 yards, and I was close enough to be able to see what he was hitting, and it was a 5-iron. He hit a moon shot, an absolutely towering shot. The sound of the ball coming off the clubface was straight off the PGA Tour. It never left the flag and landed about 10 feet away. That was an absolutely PGA Tour shot right there. Then I followed him the rest of the tournament, maybe three matches. When it was over I said, ‘You know what, I’m going to take a chance on this kid because he went from being so bad in that high school state championship to being an athletic beast.”’

Marcotte, a sophomore, is now one of the team’s starters.

“I had no idea about UNCG,” Marcotte said of the recruiting process. “It was kind of cool to learn from the beginning because other people’s opinions can persuade you a little bit, so I got to form my own. I had no idea who they were or anybody on the team.”

His excitement level increased when he took a visit to Greensboro.

“I think it’s really cool and we have such a good team with only North Carolina kids,” he added. “When you arrive on campus on day one the chemistry is already there. You grew up playing against these kids and now you want them to play good. Our team is so close because we all have bonds from North Carolina.”

While recruiting is not an exact science – far from it – Stewart finds himself making fewer mistakes with more information on the local kids.

“This is really a two-way street,” Stewart said. “They are able to find out everything about us – the good, the bad and also the ugly – and I can find out the same things about them. So, the fact they can get so much information on us, and I can get so much information on them, it really allows both sides to make a really well-informed decision. A lot of my guys have already played 20-30 rounds of junior golf together; a lot of the parents have spent time walking down the fairways together. So, it really allows our program to have a lot of different voices trying to recruit players to come to UNCG to where if you had a team from all over the world, or all over the country those families are just not going to know each other.

“It is really easy for somebody in any part of the state of North Carolina to pick up the phone since they already know one of our parents and call them and say ‘Hey, tell us about the program, tell us about coach Stewart.’ It really lends itself to allowing families to making a very informed strategic decision. When people do visit schools you do have a lot of coaches and a lot of programs that will put their best foot forward but is that the way it really is day-in and day-out there.”

With a roster of North Carolina talent, UNCG is the two-time defending Southern Conference champion and has four NCAA appearances since 2016.

“It sounds good to say you play golf at an ACC school but we play a great schedule, so we’re playing the top teams in the country, too,” Lyerly said. “One reason I came to UNCG was I knew I would have a better chance to start right away and play all four years. If you go to an ACC or SEC school there is a lot better competition on that team and you may be a really good player but sitting out a couple of tournaments. Here, we still have a lot of good players but it’s a little easier to get a chance to play more often. I didn’t just want to sit the bench or sit at home while the team was at a tournament, I wanted to play.”

Another Ross renovation under way in North Carolina Sandhills
March 29, 2021