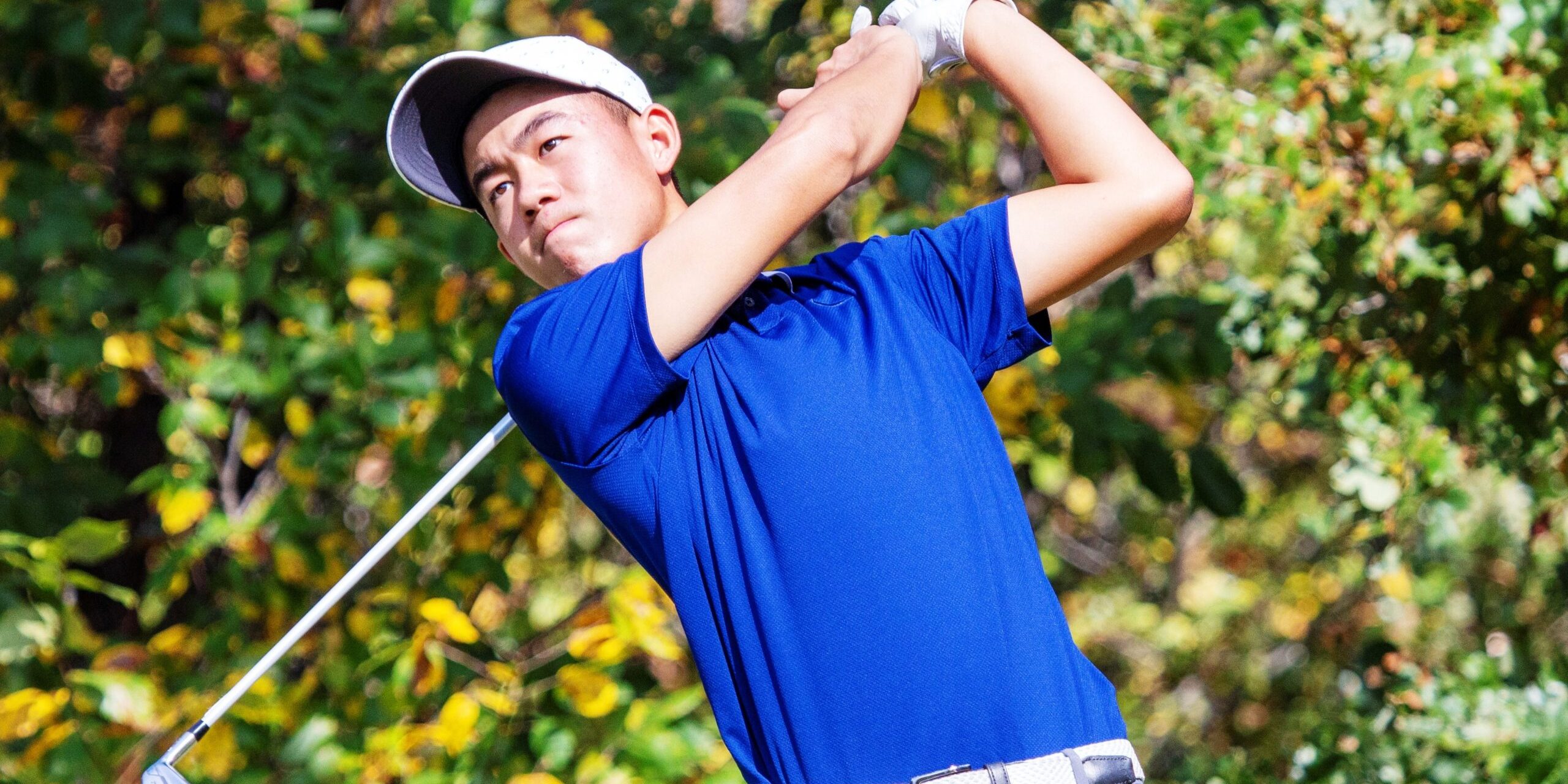 “I want to be the guy making that speech next year,” Chinn told his dad.

The senior at Langley High School in Great Falls, Va., proceeded to do just that, earning All-America first-team honors for the first time in 2020 and ending the season No. 1 in the Rolex American Junior Golf Association (AJGA) rankings, making him the boys “Rolex Junior Player of the Year.”

Country Club of North Carolina member Jackson Van Paris enjoyed his fourth year being honored as a Rolex All-American. Verbally committed to Vanderbilt, the junior from Pinehurst won the 2020 Junior Invitational at Sage Valley in March by two shots, along with the Sea Pines Junior Heritage in February.

On the girl’s side, Alexsandra Lapple of Pinehurst earned 2020 Rolex Junior All-American honorable mention honors, as did Amanda Sambach of Davidson.

For Chinn, the season was highlighted by consistently competitive, high-level play. He teed off his campaign with a 7-under-par 65 in the first round of the 2019 Rolex Tournament of Champions, one of the most prominent events on the junior circuit, at PGA National Resort and Spa in Palm Beach Gardens, Fla. An even-par second round 71 diminished his lead. But following a bogey-free third round, Chinn went on to capture his first AJGA victory by four shots.

Then, in October, rounding out the AJGA season at The PING Invitational in Oklahoma, Chinn was again the lone player to post three rounds under par. Despite beginning the final round with a four-stroke lead, Chinn struggled on the front nine. After a bogey on the par-3 No. 11, he flipped the switch to battle head-to-head with three-time Rolex Junior All-American Gordon Sargent – who was on his way to his own bogey-free round.

Chinn posted six birdies in the last seven holes to seal the victory by three strokes.

“To start the year, my No. 1 goal was to win Rolex Junior Player of the Year,” said Chinn, who became the first Virginian to receive the honor. “That helped me want to be the best and that mindset helped me work all year toward that goal. I’ve really worked hard for the past year to get my game where it is now. My coach and I have worked swing-wise to get it more consistent. Everything from the swing to the putting to the short game, even to the mental side of the game, everything was so consistent this year.”

Chinn was born in California. With his father serving in the Navy, he also lived in Hawaii and now Virginia. He took up golf at age 5, playing with his grandfather, who is an avid golfer. “My mom always told me from the start that I had a pretty good swing and was able to get the ball around,” Chinn said. “They seemed to think there was some potential from the beginning. I’ve worked really hard to get to this point.”

“Kelly’s got a very supportive family, which is awesome,” said his coach, Daniel Neben, who has been working with Chinn since 2016. “That’s very helpful in terms of his development.”

Neben has coached numerous Korn Ferry Tour players and elite-level junior golfers. Two years ago, while watching his star pupil practice, Neben turned to Chinn’s mother, Eiko, and told her that, “his ball striking is about as close to a professional level as I’ve ever seen.”

“He’s got this grit and this desire to win on every shot that you don’t see a lot of junior golfers have,” Neben said. “It’s something a lot of Tour players have. He’s good about setting realistic goals. And when he sets that goal, he’s got like a game plan to achieve it and he works his butt off to get there.”

Along with his bookend victories, Chinn’s season was impressive from start to finish. At the Jones Cup Junior Invitational in late 2019, he put together a runner-up finish at Sea Island Golf Club to close out the calendar year. In one of the final events before the competitive golf season was suspended in March because of COVID-19, Chinn competed at the Junior Invitational at Sage Valley. He finished in the top 10, in a five-way tie for sixth at 5-under-par 211.

Chinn had a solo sixth-place finish in the AJGA’s return to play at the AJGA Invitational at Greensboro’s Sedgefield Country Club. He finished the tournament with three of four rounds under par and a final-round 68, despite two bogeys and a double.

Among Chinn’s most convincing triumphs was at the 54-hole Virginia State Golf Association Junior Stroke Play Championship in late July at James River Country Club. He overpowered the course to fire a tournament-record of 16-under-par 194, eclipsing the previous mark by eight shots at the par-70 layout and finishing five strokes ahead of Chase Nevins, a teammate at Langley High School. Chinn has also helped his high school squad capture three straight championships since joining the team as a freshman.

Chinn advanced to the round of 64 at the U.S. Amateur championship in August at Bandon Dunes Golf Resort, where he lost to eventual champion Tyler Strafaci, 4 and 2. He had secured a spot in match play by making birdie on his final three holes of the final round of stroke play. Chinn also qualified for match play and made it to the Round of 32 at the North & South Amateur.

At The Junior PLAYERS Championship at TPC Sawgrass, an event modeled after THE PLAYERS Championship, Chinn shot three rounds of 71. In a back-and-forth closing round, he was in a tight race to win. He carded four birdies and three bogeys to end in a four-way tie for second, two strokes off the pace. Chinn won the 54-hole Middle Atlantic Amateur by four strokes at Bethesda Country Club.

“He’s always been pretty good mechanically,” Neben said. “Initially, we made some large changes to create better pivot. As he progressed, we started working a lot on his short game and a lot on his ball striking.

“At the end of last year, right after the Junior Amateur we made a big change to go from a hard-right club path. He was swinging a little bit too far from the inside to being a little bit more on plane and getting has getting his ball flight a little bit straighter. He took that this year and he ran with it. He’s throwing darts now.”

Neben describes Chinn as being, “very charismatic, very talkative away from the golf course — always joking around with his buddies.”

Standing a lean 5-9, 150 pounds with a frame that could gain some muscle, Chinn still averages nearly 300 yards off the tee. Yet, Neben sees room for improvement. “He’ll come back from his first year of college and I suspect I’ll see about another 20 pounds on him,” he said. “Once he gets that muscle, he’ll have the potential to swing maybe another 5-7 mph faster. He’s already reaching close to about 110 miles an hour clubhead speed with his driver. For a 150-pound guy, he’s not short.”

Chinn committed to the Blue Devils nearly two years ago, but before he arrives in Durham in the fall, he has high school golf, AJGA events and amateur events still to play. “I’m really excited about college,” Chinn said. “It’s been a while since I made my decision. Obviously, the coaches there are great, the facilities, the campus, I just loved everything about Duke. I’m really excited to get there and work with the coaches. Obviously, my main goal is to get better.”

Neben firmly believes Chinn will take college golf by storm. “It’ll take him probably a tournament or two to adjust,” he said. “But after that I suspect he’s going to roll all over the college scene. He’s got better stuff than most of the young kids out there. He’s got so much amateur golf experience. I suspect that we’ll probably see his name up there in the top 15 in the college golf rankings within a year of him starting at Duke.”

Ultimately, Chinn hopes to reach the same levels as a Woods or Mickelson.

“My dream is to be on the PGA Tour, to be successful,” Chinn said. “It’s really cool and encouraging to see those names on the award. It’s shown me that I’m on the right track. I’ve just got to keep working hard and getting better every day. Hopefully one day, I can be in the same spot they are now.”