No mystery in Migliaccio’s golf game 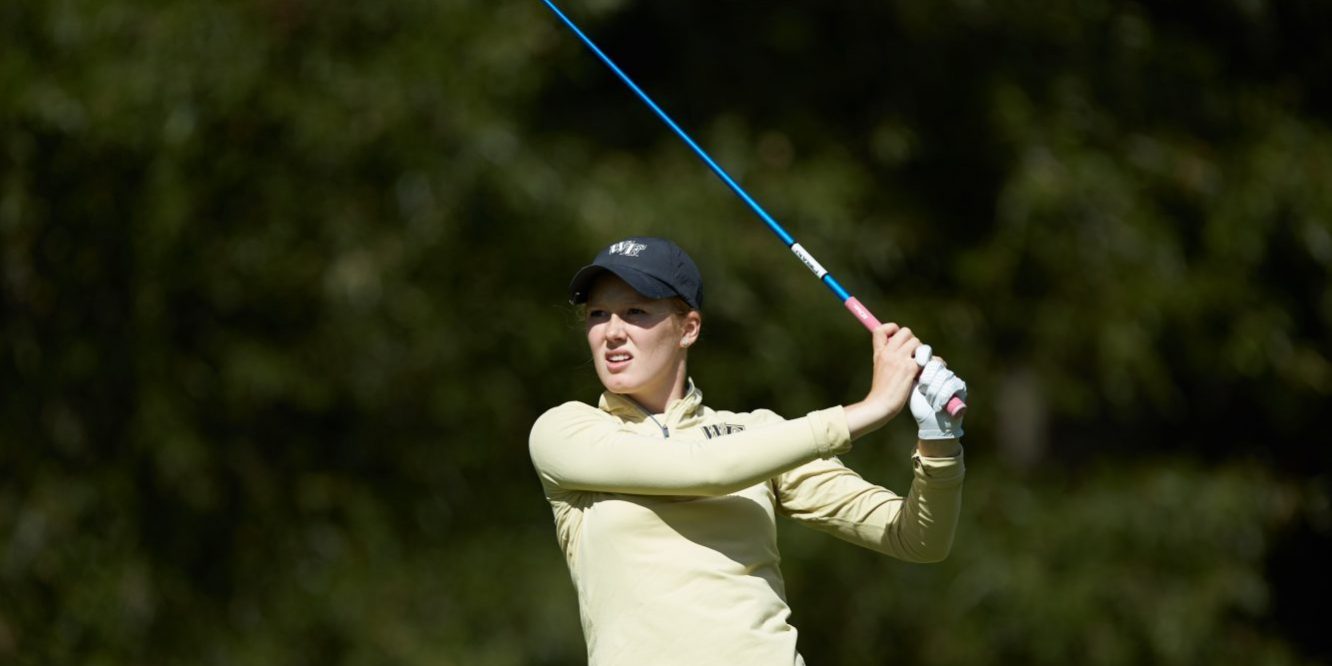 Emilia Migliaccio is riding a charter bus with her Wake Forest teammates, heading to Charlotte Douglas International Airport. While the rest of the team relaxes ahead of a flight to the Dominican Republic for a tournament, she is chatting away on her cell phone.

“At least the bus is kind of loud,” Migliaccio says a bit self-consciously. “So it’s not like my voice is overpowering everyone.”

Maybe not her voice, but her golf game is another story.

The 19-year-old sophomore from Cary made quite an impression in her freshman year. Migliaccio earned second-team all-America honors from the Women’s Golf Coaches Association, was named ACC Freshman of the Year and made the Academic All-ACC Team — not that she noticed right away.

It’s no accident that Migliaccio was unaware of the outside recognition.

“It’s definitely something I get excited about, and I am honored to have received them, but at the same time, it’s making sure you don’t put your worth in the awards,” she says. “My mom has always told me not to focus on awards, so I didn’t know about all these things.”

Her mother would know. Ulrika (Johansson) Migliaccio was on the Swedish national golf team before playing at the University of Arizona (1991-1995) with World Golf Hall of Famer Annika Sorenstam. She works with her daughter on developing her mental approach to the game.

“At this point, she’s technically very sound, just understanding the difficulty of the sport, the patience, the process” says Ulrika Migliaccio, who also earned All-America status as a freshman. “We really focus on the process and not the outcome. We try to take all the noise from the rankings and the tournaments and not focus on that. We focus on staying in the present.”

That’s never a problem for Migliaccio, who embraces the demands of the game.

“I love travelling. The thought of playing week in and week out, it just makes me so excited. I just love the grind and the difficulty. The satisfaction of doing well is so high. It’s so addicting, you just want to keep doing it.”

As her game hits new heights, her travel schedule only gets more hectic. For the second year in a row, she will play in the Arnold Palmer Cup, a collegiate match-play event between the United States and an international team. This year’s event will be at The Alotian Club in Roland, Ark. Last year, the event was held in Evian-les-Bains, France.

“You look to your right and you see Geneva. It looks like a painting. The water is so still,” she said. “Team events are my favorite. You have to make a putt and everyone is watching around the green. It was such a cool experience.”

Although she is immersed in golf most of the year, Migliaccio makes time for another passion. She recently published her first work of fiction, Just an Illusion, a 487-page mystery about a young woman who can’t outrun her troubled past. The novel grew from a creative writing class at Athens Drive High School, where she had to describe what happened when she entered an empty building, only to find a troubled person inside.

“Once I started writing about this mysterious person, I thought I could turn this into a book. Those instructions that he gave us roughly follow in my book.”

She hardly considers herself an accomplished writer, but like golf, she’s willing to put in the work.

“I don’t know all the ins-and-outs (of writing),” she says. “I’m just doing it because I’m passionate about it. But I definitely plan it. As soon as you think it’s getting dry, something happens that’s suspenseful. Some of it is kind of sad, but I have to write it because it’s what the characters are doing it.”

She already has a follow-up in the works.

“When we were flying to California for our first tournament, the Wi-Fi didn’t work, so I couldn’t do homework,” she explains. “So I wrote the entire outline to the sequel.”

Migliaccio is a communications major with a double minor in English and journalism. She is determined to be a good student at a rigorous academic university.

“It was a big adjustment because it was easier to get an A in high school than it is in college,” she says. “You want to make sure you establish a good relationship with your professors so they’re understanding when you miss a lot of class for your sport.”

With so much time devoted to golf and academics, Migliaccio has precious few hours for the traditional college experience. Most of her independence and social life has to fit into the remaining hours.

“A lot of it revolves around golf,” she says. “We have to make sure we schedule things properly. If you don’t, you can’t even breath. You’re just running from class to practice to studying to tournaments. It can get really overwhelming.”

“I definitely have time for social events and hanging out with my team. We have so much fun together. I definitely still have time to be a kid.”

When her Wake Forest career is over, Migliaccio wants to play on the LPGA Tour. A lot can happen along the way to a career as a touring pro, but her track record suggests she is trending toward the top of women’s golf. Last fall she won the Tar Heel Invitational in a field of 96 golfers. At the recent tournament at Casa de Campo Resort in the Dominican Republic, she tied for third place among 75, shooting a final-round 67.

“Honestly, college is the best way to prepare you for professional golf. All the best kids play,” says Migliaccio, who played in the U.S. Women’s Open in 2018. “If you can dominate in college golf, then it’s a really good indication that you can dominate the pro circuit.”

Her mother thinks Emilia has game and the makeup to make the dream come true.

“I really do,” Ulrika Migliacco says. “She’s very well-rounded. She’s very strong mentally and technically. She’s had the opportunity to play with some great players. If you can hang with them, you’re probably doing OK. But we always believe in our own journey and just try to improve ourselves, versus comparing ourselves to other people.”

As she has passed through the ranks of junior golf to collegiate competition, Migliaccio has come to appreciate the difficulty of her goal.

“Now that I’m getting older, I’ve finally reflected that this is not going to be easy,” she says. “I’m not just going to go out there and start winning and start getting a bunch of money. It’s going to be really hard. But it makes me want to work even harder to finish in the top of the money list.”

In the meantime, she’s grateful for these college years — and all of the traveling and  grinding seasons that have come before.

“If I didn’t play golf, I wouldn’t even travel to other places in the United States,” she says. “Now I have a reason to go places because I’m playing college golf and one day it will be my job. I definitely spend time reflecting on it and just remember how grateful I am that my parents gave me this opportunity to play golf. It’s really special.”