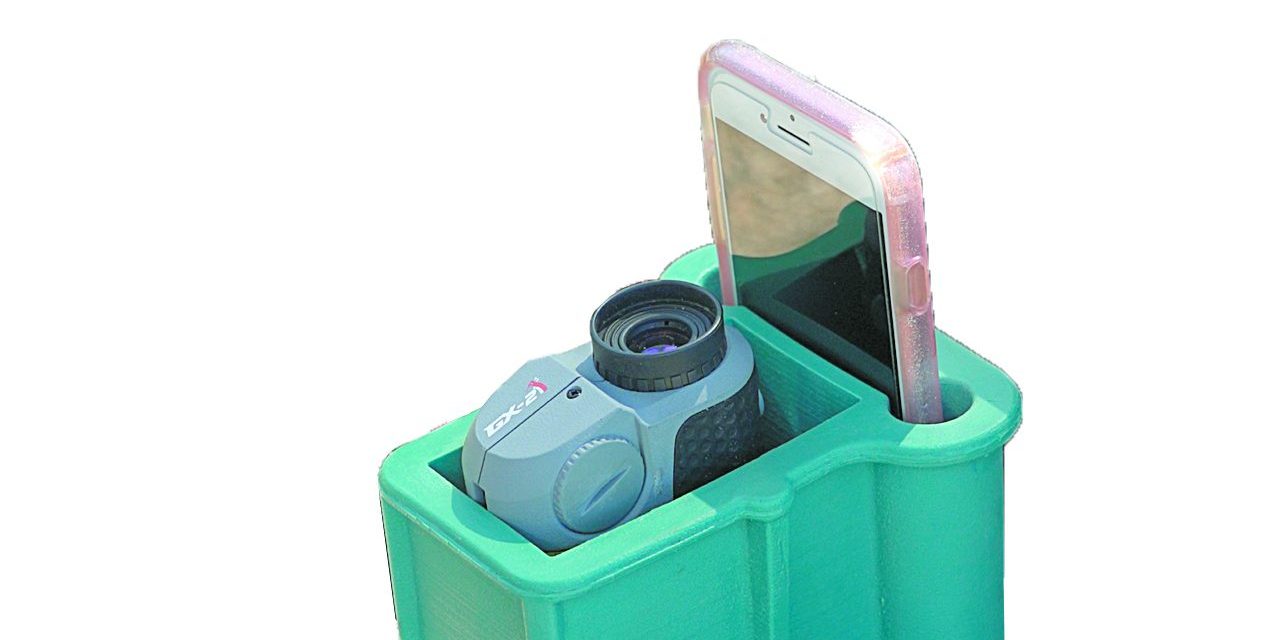 Scott Patten says the idea originally germinated with his father, Dean, a retired engineer who spends most days of the week playing golf in their hometown of Apex.

As part of his retirement gift, the elder Patten received a golf rangefinder that he often found himself misplacing during a round. Eventually he lost the expensive piece of equipment.

Meanwhile, his son, also an avid golfer, was facing similar issues with both his rangefinder and his cell phone.

Patten said his father devised a product that fit in his cup holder and worked for his specific-size rangefinder.

An entrepreneur, Patten thought the concept could be taken to a larger audience.

Patten bounced the idea off another entrepreneur friend of his, Chad Tyner, who Patten had gotten to know through a YMCA Adventure Guides program with their sons.

After several research and development attempts they came up with the mold for the current product, which they named the “Range Gripper.” They unveiled the unique product in Orlando at the PGA Merchandise Show in late January.

The world’s first all-in-one rangefinder and cell phone storage device, Range Gripper sits directly in any golf cart cup holder and is designed to work with most brands and various-sized devices.

“The biggest thing for me was that it uniformly fit most rangefinders and cell phones,” Patten said. “That was the hardest part. We were able to find a real flexible, soft and durable polymer. It’s been excellent. It has passed every test.”

An added bonus: the Range Gripper is available in a variety of colors and can be custom branded with logos for corporate or charity outings, making it all the more attractive for the consumer.

“We heard about one event where they were handing out fidget-spinners as promotional items,” Tyner said.  “When you’re giving away fidget-spinners, you’ve run out of options. We think the Range Gripper will be a unique and popular item for outings.”

During a whirlwind three days at the PGA Merchandise Show, Patten and Tyner met with numerous professionals, golf course owners and distributors from around the world. Some of the club representatives told them that as many as 60 percent of the phone calls they received during a typical day were from golfers who had left behind their cell phones or their rangefinders.

Meanwhile, several name brands showed interest in carrying the product in their retails stores and online. Range Gripper also agreed to a partnership with the First Tee of the Carolinas, where a portion of every Range Gripper sale will be donated to that charity.

In addition, Patten said promotions would be offered during various military appreciation days, with the vision being donating a portion of each sale to an organization such as Folds of Honor. “We want to help veterans,” he said. “We want to help young kids get out there and swing some golf clubs. We’re not trying to make a bunch of money. We’re trying to give back and be supportive.”

Following the PGA Merchandise Show, Great American Golf Media and Marketing founder Ray Adams named the Range Gripper as one of his “Favorite Products of the Year.”

“To be a golfer and a businessman, and to be able to talk to these bigger companies and know that they are interested in our product, that was a great success to me,” Patten said. “The golf pros all look at (the Range Gripper) as a great item for their new members or their charity events.”

Patten, 37, says he “fell in love with the outdoors” while playing golf throughout his childhood in Apex. He graduated from N.C. State in 2003 with degrees in Horticultural and Business, and started running a landscape design company called Plantenders.

Tyner, 43, grew up on the coast around Wilmington. Following graduation from UNCW, Tyner spent years in New York and Los Angeles working in film and television, while simultaneously developing his entrepreneurial chops by creating a successful line of decorative light diffuser called Skypanels. Tyner and his wife, Niki, then decided to return to North Carolina to raise their family in Apex.

During the past 15 years, Patten and Tyner both launched several other successful products and businesses through Amazon and Ecommerce. “We finally found a product where both of our expertise and skills could coincide nicely to get this innovative product to market,” Tyner said

Patten calls himself the “idea guy,” while Tyner is more marketing and business-oriented.

“We both think alike and we’re both very enthusiastic,” Patten said. “We like to make stuff happen. We’re trying to create unique products that aren’t gimmicky, that actually do what they’re supposed to do and fix a problem.”

The Range Gripper’s MSRP is $29.99 and there is a pre-order price of $24.99 (www.rangegripper.com). Logos and custom branding are available for a slightly higher price.

“It’s a reasonable price point for what you’re getting,” Patten said. “The product is high quality and once you get one you’ll have it for years. It’s not going to go away.”