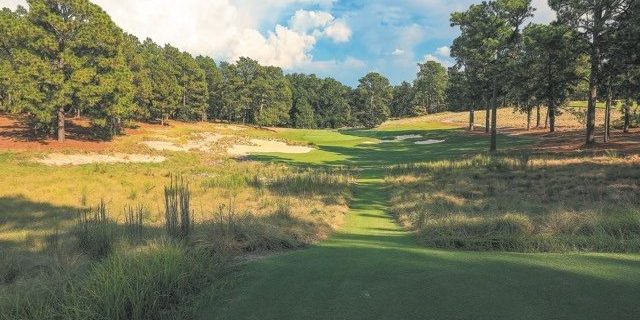 This time, however, Franz will be getting his hands dirty so to speak on the Donald Ross layout as the United States Golf Association announced recently it would once again stage a U.S. Women’s Open at the resort made famous by the late Peggy Kirk Bell.

Franz moved his offices to town and began work at Pine Needles in 2016 with major bunker restoration on the famed course. His work has extended to the greens and tees, and could expand further if the USGA decides it would like a few more additional or changes when the best female golfers in the world converge on the Sandhills in four years.

“It’s going to be a blast,” Franz said. “The ladies hit it basically as far as the men did when Ross was designing the course, so I actually get to design things for what the course is actually supposed to do out there.”

Franz has worked on some high profile jobs over the last five years, helping with the renovation of Pinehurst No. 2, the building of the Olympic Club in Rio and his first solo project across Midland Road at Mid Pines Resort.

The U.S. Women’s Open will return to the Sandhills for the fifth time over a 26-year span, with Pine Needles hosting in 1996, 2001 and 2007, and Pinehurst No. 2 welcoming the ladies after the men in the historic back-to-back Opens in 2014. The second national championship for women was also staged in North Carolina, at Starmount Forest in Greensboro in 1947.

“Hosting championship golf events plays a big role in how our community is defined and perceived,” said Caleb Miles, the CEO of the Convention & Visitors Bureau of Pinehurst, Southern Pines, Aberdeen Area. “Pine Needles and Southern Pines have proven to be an ideal venue for a Women’s Open Championship that will be contested on one of the great Donald Ross courses anywhere.

“They also understand how impactful the event is for the area as a whole from both a brand and economic impact perspective. Combined with the announcement of 2024 U.S. Open at Pinehurst, there is no denying the moniker ‘Home of American Golf’ fits perfectly.”

Mrs. Bell passed away in November 2016, but longtime Pine Needles president and CEO Kelly Miller remains, which is a comfort to USGA when it comes to awarding bids and then staging a major championship here.

“I think it does matter,” said U.S. Women’s Open championship director Shannon Rouillard. “Kelly Miller and the Bell Family have been involved with Pine Needles for a really long time and we’ve had a long-standing relationship with them. It’s always great to be able to come back and feel welcomed and “at home” in hosting another USGA Championship.

“We still have our normal future Open site process, which is we don’t go anywhere where we’re not invited,” she added. “So, a lot of times clubs will let us know that we’re interested and we go through our normal process to vet those clubs and obviously a lot of them have been previous sites and we’re familiar with them. However, we still go through a vetting process to make sure we’re at the best place possible for each respective championship.”

Rouillard said patrons who attended the U.S. Opens at Pine Needles will see a different kind of championship in 2022.

“What we are seeing in competitive women’s golf is the average age is going down,” she said. “You look at the LPGA there are a lot of young, great golfers out there. You don’t see quite as many older players out there. We’re seeing it in all of our women’s championships, and we’re continuing to aspire to grow the game through our junior championships and through our LPGA and Girls Golf, the First Tee. So, there are a lot of efforts going on to have these young girls aspire to play the game for a lifetime, whether it’s at the amateur level or going on to play professionally.”

Some of the “older players” will have a chance to tee it up at Pine Needles in 2019 when the USGA brings its U.S. Senior Women’s Open Championship to town.

“Classic Donald Ross golf courses are always a treat to play and his golf courses have continued to stand the test of time,” Rouillard said. “The opportunity for these great players to come back and play a classic golf course is always neat for them. This group has fond memories of being at Pine Needles and I think they are going to embrace the opportunity to be at a location and community that embraces and loves women’s golf.”

“It’s kind of neat,” added Miller. “It will be fun having some of these girls back who played in 1996. They are at Chicago Golf Club for this year’s inaugural championship, which is a neat kickoff for them, and then they’ll be headed our way in 2019. It’s right around the corner.”

“Pine Needles is, if not my favorite U.S. Women’s Open venue, it’s in the top three,” said Webb, whose 2001 victory was her second straight Women’s Open title. “Pine Needles [in 1996] was my very first U.S. Open I ever played in, and then when we went back in 2001, I was so excited to be there as a defending champion. Obviously, it was a special week where I played fantastic golf at a tremendous golf course. I’ll always have special memories of Pine Needles.”

“The Donald Ross-designed course has already crowned three memorable Women’s Open champions, and we’re confident it will again be a welcoming yet challenging host for the world’s best players,” Miller added. “I can only imagine how happy Mrs. Bell would have been to host another Women’s Open.”