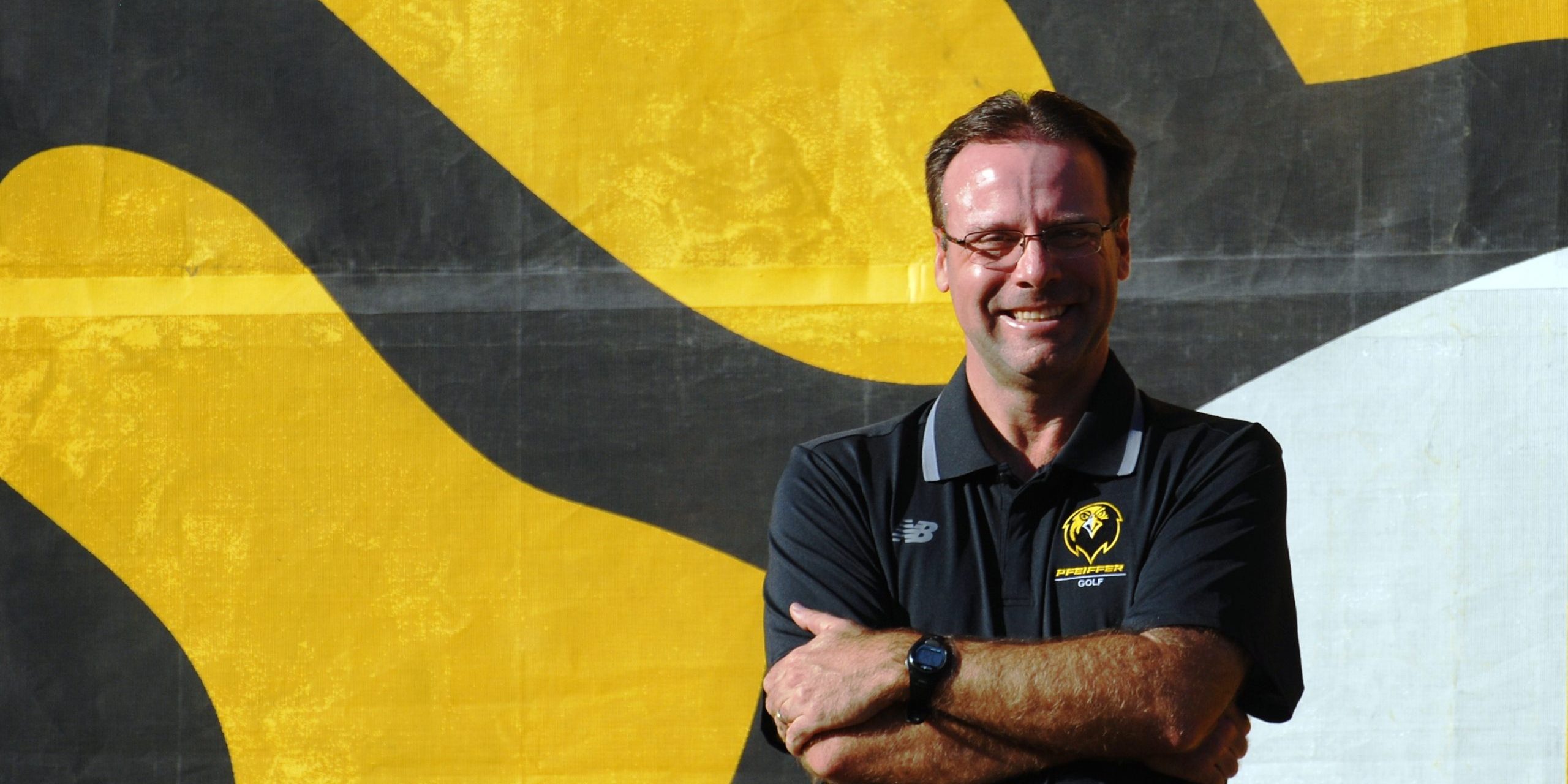 It’s an understatement to say Chris Jones is accustomed to starting golf programs from scratch.

Within the last 15 years alone, Jones has launched Northern Guilford High School’s golf teams (2007) and the university programs at Johnson & Wales (2019) in Charlotte.

And in late September, Jones took the head coaching job at Pfeiffer University in rural Stanly County, and will help usher the men’s and women’s golf programs into Division III in the ultra competitive USA South Athletic Conference.

Pfeiffer, with a proud golf tradition, was previously a Division II program in the Conference Carolinas before switching in 2017-18 to a conference that includes in-state golf powerhouses Methodist and Greensboro College.

Jones, 47, is no stranger to small college golf, having played at Lenoir-Rhyne and helping host three Division III national championships while in operations for a decade at Grandover Resort in Greensboro. He also was an assistant coach at Belmont Abbey for four seasons.

“The competition has gotten really good in Division III golf,” Jones said. “There are kids who turn down Division I offers to come to a Division III school – for reasons such as academics or playing time. When I was at Belmont Abbey we had a player – Nick Stafford – who was a really great golfer who turned down Division I offers because he wanted to stay home and be a big fish in a small pond. He was All-American three years and won a dozen college tournaments. People like that want to play golf and not sit on the sidelines or be the 12th man on a Division I roster.”

Pfeiffer golf graduates and school Hall of Fame members include top 100 teacher Dana Rader and Jason Cox, to name a few. Cox had worked at the Carolinas Golf Association for 17 years prior to taking his new post as director of golf operations at N.C. State, and Rader has moved her award-winning golf academy from Charlotte to Hilton Head, S.C. Both are big names in the golf world.

With the Pfeiffer job search lingering into the fall, Jones laughs that he may be the only coach in the nation to have coached two teams in one season, having taken Johnson & Wales to a tournament before taking over the Falcons and doing the same.

“I started the Johnson & Wales program from scratch and my colleagues were super there,” Jones said. “But this was a great opportunity. I wouldn’t have left there if it wasn’t. A lot of people in North Carolina know about Pfeiffer, and not a lot of people knew about Johnson & Wales since it was a young school with a young athletic department.

And even though Misenheimer, N.C., has an official population of less than 1,000, Jones is quick to take potential recruits to its two practice facilities – Old North State Club and Tillery Tradition – both excellent golf courses.

“Another thing that attracted me to this job was the facilities,” Jones said. “I wasn’t fighting with public play like I was at Johnson & Wales. It was nice to come to a rural area where the courses are top notch. There is even a Pfeiffer golf bag in the pro shop at Tillery Tradition. The good thing about working here is everybody knows who you are.”

The first order of business for Jones is to expand his roster sizes, and start pounding the North Carolina pavement in search of players who may be late bloomers or overlooked by the larger schools. As of now, his best men’s golfer is a graduate student from Florida who also happens to play on the school’s baseball team.

“In my first six weeks here I’ve had more people reach out to me via questionnaires or emails than I did probably my whole year-and-a-half at Johnson & Wales,” Jones said. “People know Pfeiffer, and then coaching in high school for as long as I did, those guys know what I want.

“I know when Mack Brown first coached football at North Carolina he ruled the state of North Carolina because he knew all the high school coaches. That’s the way I want to be. Granted, I’m Pfeiffer and not North Carolina, but you get the idea.”

“I think the future is really bright here golf-wise, and with me coaching for awhile in the college ranks, and being from North Carolina it’s is going to help me a lot with in-state kids here. It’s nice to have a local area flavor, but also nice to be able to branch out as well. I believe we can do both here successfully,” said Jones.