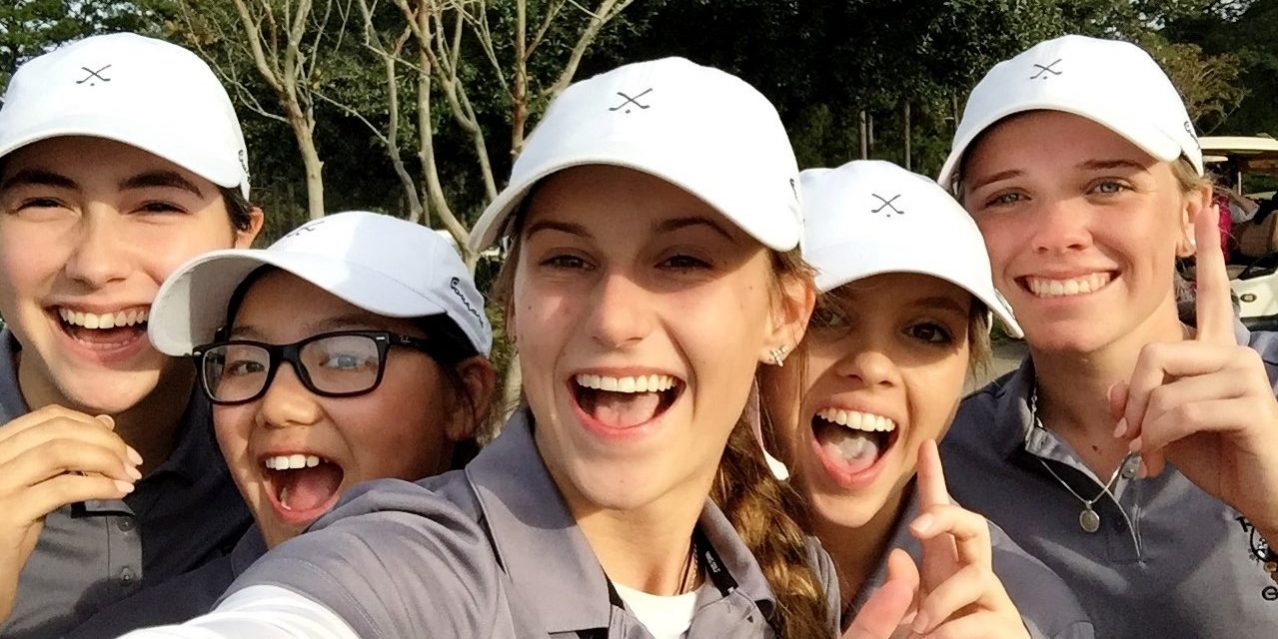 A new addition to the team and clutch scoring in the final round led the Rockingham County women to their fourth straight 3-A state golf championship.

“It’s an outstanding accomplishment,” said Rockingham County coach Mike Williams. “I’ve just been lucky the last four years to have a bunch of girls who go at golf like it’s a business.”

The four straight titles tied a state high school record in women’s prep golf. The only other school to accomplish the feat was Salisbury in the 1-A/2-A classification from 2011-2014.

Junior Riley Hamilton, a transfer student, paced the Cougars in scoring at Longleaf Golf & Family Club in Southern Pines. She shot 76-74 – 150 and finished third in the individual scoring.

Hamilton transferred to Rockingham County this year from a private school in Virginia.

“It feels so cool,” she said of the victory. “It’s so great to be a part of something like this. We’ve gotten incredible support from the school.”

“I told them we had to putt better and just stay in the moment,” Williams said of his advice after the first round. “We had a bad day putting the first day. We had a seven-shot lead after the first nine holes but we had a terrible back nine. We kind of let everybody else back into it.”

“Our our goal was to keep the legacy going,” Cook said.

Hamilton said she transferred to Rockingham County for both academic and athletic reasons.

“I wanted to get different credits and I wanted to play different golf,” she said. “I had to play in the men’s division in Virginia. It was a different situation but I was willing to try it. I’m glad I did.”

Williams said his players’ dedication to golf has been a key to the four-year title run.

“A lot of girls in high school put their clubs up and don’t play in the offseason,” he said. “We’ve been lucky to have a lot of good players who take it seriously. They aspire to play college golf so they play tournaments year-round. When you go at it as hard as they do, you’re going to have some success.

“They’re tournament golfers. It makes a difference when you come (to the state tournament) with those types of kids.”

Northern Guilford finished second for the second straight year. The Nighthawks were hoping to end Rockingham County’s streak after defeating the Cougars in the conference final and the East Central Regional this year.

Williams said having the Nighthawks push his team during the season made the Cougars better.

“I’d like to have it the other way around, where he’s pushing us,” Bonham laughed. “We’ve had some real dogfights and it’s been a very fun, interesting conference.”

Junior Siana Wong led the Nighthawks with rounds of 83 and 80.

Senior Kayla Smith of Burlington Williams finished second in the individual standings for the third straight year. She shot 75-73 to finish four shots behind winner Ana Tsiros of Asheville. Tsiros shot the only under-par round of the tournament, a 70 on the opening day, and never relinquished the lead. She followed with a 74 for an even-par total of 144.

“I’m a little disappointed I couldn’t come out on top but I’m glad I was steady and solid overall,” Smith said. “My goal was to win it but Ana made it a little bit difficult to do that. I tried to come back but she is just very steady and never really gave me an open door to jump on.”

Smith and Tsiros are two of the top ranked junior players in North Carolina. Smith came in ranked sixth in the state and Tsiros was 10th. They also are good friends, getting to know each other through junior golf tournaments, and played together in the final round.

Smith’s 75 in the first round was a great score considering how she started. She hit two balls out of bounds on the first tee and made a quadruple bogey eight. Then she played the final 17 holes in 1 under par.

“After that hole, I honestly had no idea how I was going to play that day or the rest of the tournament. I’m glad I was able to recover,” Smith said.

East Chapel Hill was the only Triangle-area school to make the 3-A title field and finished well back tied for 10th.

Meanwhile, the future for Rockingham County could be a record fifth straight state title next year. The top three players plus two freshmen return for the Cougars.

“We’ll have the same team back next year,” Williams said. “It’s exciting times. The future is still bright. For a rural school to have a good program like us … we’re just lucky to get a lot of good golfers.”