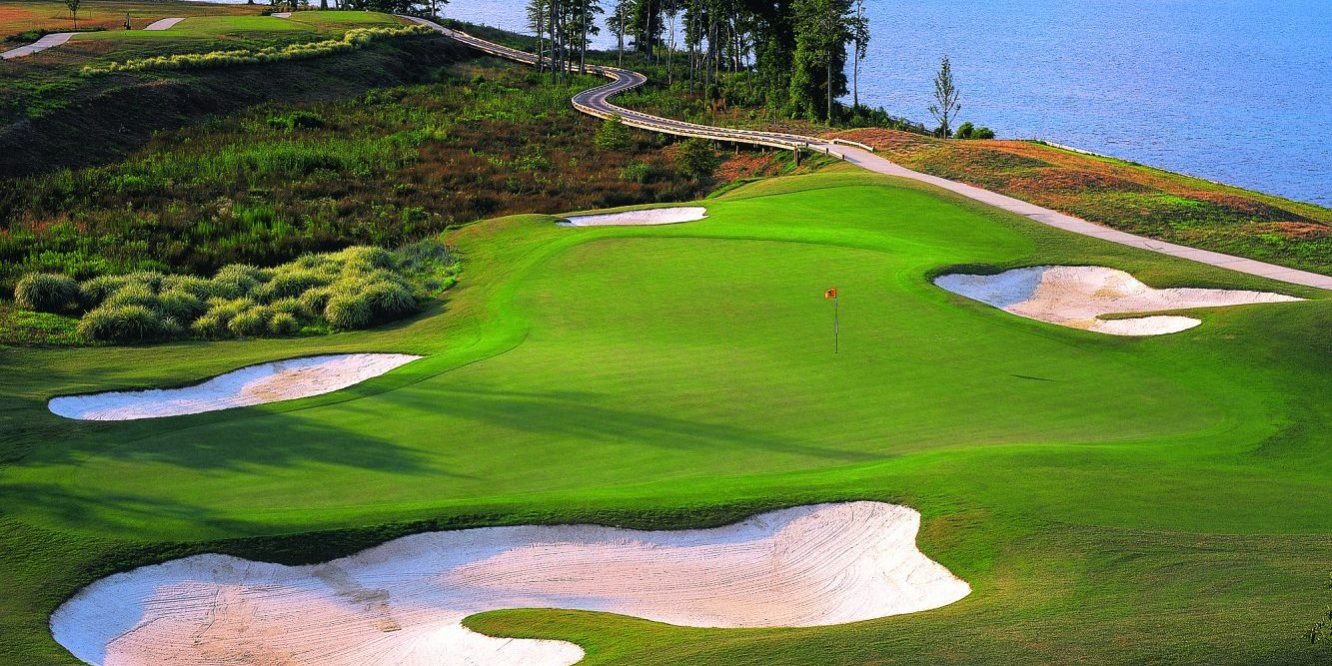 Much like the late Arnold Palmer did for so many years, Scotch Hall Preserve is extending a handshake to all golfers.

Known as much for its bite as its beauty on bluffs overlooking the expansive Albemarle Sound, the management and ownership team at the Palmer signature design have undertaken a softening of one of North Carolina’s most scenic layouts, giving high handicappers, ladies, seniors and juniors a more playable experience.

There are now 15 new tee boxes that offer golfers a choice of avoiding some forced carries. And large sections of tall fescue rough have been trimmed closer to the ground, so errant balls can now be found … and played again.

“As developers and operators we have to recognize that golf isn’t a problem because of how much time it takes,” said Michael Abbott, president of Beacon Land Development, the management group that was hired at Scotch Hall Preserve in 2015. “It’s really a value proposition on how you are enjoying your time. So, if we can solve the problem with how you get off the tee and if I can keep you in play we’re all going to enjoy golf better.

“The problem today is that if all four of us go play after we hit our tee shots we may not see each other again until getting to the green,” Abbott added. “We try to deal with that in how we’ve reconstructed our tees and the way we’ve changed some of the landing areas. We’ve made golf easier here — and I think golf is ready for a little bit easier instead of harder.”

Scotch Hall Preserve, about a two-hour drive from the Triangle, has undergone its fair share of initiatives over the last decade, trying to at first plant the developmental real estate seed for second or vacation homes, to now driving home an offer as North Carolina’s next, great golf destination.

The latest management team may finally be on to something.

There are now sunset cruises, jet ski and boat rentals, fishing adventures, tennis courts and a pool deck overlooking the Albemarle Sound – the second largest estuary in the United States – as part of the course’s expanding potential.

“It used to be that real estate drove everything here. It drove all the decisions because it is a spectacular piece of land,” said Thomas Niederkofler, president of the ownership group Rial Corporation.  “Everyone thought that ‘look people are going to want to move here because it is so spectacular and when there are enough people here then we’ll build out the operations.’  With Beacon we’ve taken the opposite approach, which is let’s get the operations dialed in and let’s make this a truly fantastic experience once you get here and then that will drive the real estate sales. We’ve kind of flipped around the approach.”

And turning heads for those who have not experienced Scotch Hall Preserve within the last year. There are new accommodations along a fairway of the back nine, which is within walking distance of the restaurant, called The Shed, with its trendy interior armed with darts, drinks and daily specials. There are steak and seafood nights, fire pits and so much more.

“We’ve really made a commitment to have overnight accommodations,” Abbott said. “One of the things before was say you drove an hour-and-a-half to get here, where did you stay? Now we have 28 beds on property. A lot of folks who travel to play golf travel as groups of 8, 12 or 16, and now they have the ability to come here for a couple of days and play the golf course a couple of times and stay here overnight.”

The Palmer signature course is one of a handful of courses you do want to sleep on it, and then get up and tackle it again.

Very few layouts along the East Coast offer as much scenery and strategy as Scotch Hall Preserve. The 17th hole in particular, a par-3 along the Sound with a carry-over wetlands and a drive to the putting surface on a serpentine bridge, is among North Carolina’s most spectacular golfing scenes – with views from the tee box and green equally stunning.

The price is right, too. Golf is $40 on weekdays and $50 weekends, including a cart.

“I would agree that this is a $100-plus golf course,” Abbott said. “But people want to be around people. So we’ve priced it a way that encourages more people to come. There is so much competition out there and we’re all competing for almost the same thing. We believe if you come here once you are going to come back again — not only because of the price but because of the experience. It’s getting you here first that counts.”

Back to the golf course and the new tee initiative. Ownership and Beacon hired Beau Welling Design out of Greenville, S.C., to come in and look at every hole and figure out the best place to place the new tee boxes, designing the “forward tees” to measure between 4,300 and 4,500 yards instead of the previous 5,300.

“It’s just more variety to pick from and more playability to pick from,” Abbott said. “Again, this is all about playability. We’re trying to make it to where everybody can play golf together. Distance has become a big deal and forced carries have become big deals and we’ve tried to eliminate that. A person who can’t get it out there that far now has a place to play from. For somebody who is a 10-15 handicap they benefit by the fact that we now mow some of the outer areas down. The beauty is more in the views of the water instead of maybe some of the tall grasses you’ve seen out here. You’ll now be able to play the golf course with one ball instead of three.

“Listen, the game has been screaming for it so we decided as a group that it was more important to groom the golf course in a way where it really played in optimal condition rather than have a golf course that played to optimal difficulty,” he added. “We took all the lions, tigers and bears away and said ‘Hey, go play.’ Because of the angles and the way this golf course sets up the lower handicappers will still get a premium challenge out here because it hasn’t affected the way they play the golf course.”

Scotch Hall Preserve has also gotten some significant traction offering season passes — $600 for 55-and-older for the year and $900 for anyone else, with renewals available at the end of your term. Attractively priced overnight packages are also driving Triangle area golf traffic to sleepy Merry Hill.

“Coming to Scotch Hall for a weekend is more than just a golf weekend; it’s more like a destination weekend or a resort weekend,” said Laura Dorner, the course’s director of tournament and outside sales. “We give all of our guests who stay on property a pool pass so the family can go to the pool while the guys are out golfing. It’s a different atmosphere here now. Once people are on the property now they don’t want to leave.”

“This is a great place to come,” added Abbott. “It’s peaceful, it’s on the water, it has everything you would want to have – and it’s accessible. So, we have kind of changed the entry point to introduce you to Scotch Hall, and in that reset we’ve seen people building houses again, and people are playing here and people are eating here. You see people around here all day and that’s made it more of a community, and it continues to grow. “It’s fun out here.

Arnie would approve … and offer a handshake to all who choose to tee it up.