The Great Debate: Is overseeding or turf paint best for winter conditions? 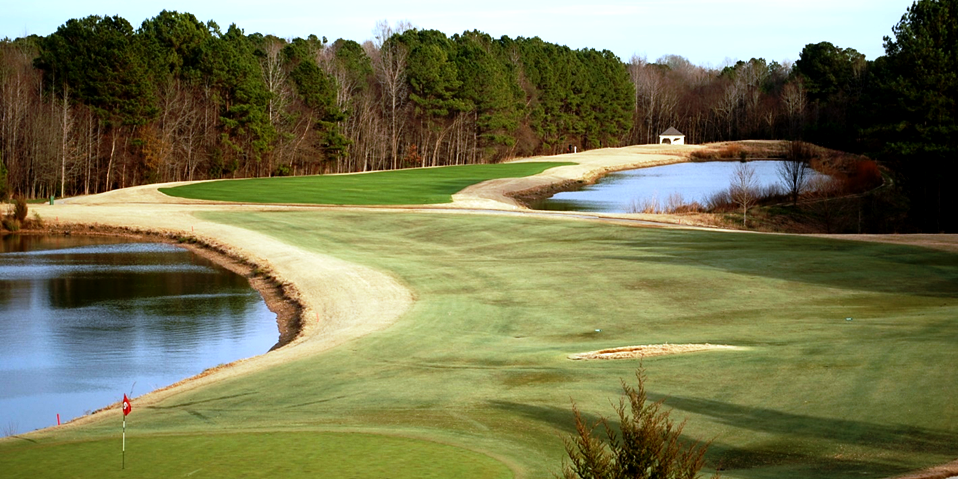 There are a few certainties in life – death, taxes and frost — turning the bermudagrass fairways of North Carolina’s wonderful golf courses a sad shade of tan every winter.

When I first came to the Tar Heel state from the Great White North I wondered why “all the grass had died.” Growing up on bentgrass fairways and bluegrass rough, I quickly learned the bermudagrass cycle of dormant and then emerging turf each spring.

However, some resorts and private club fairways and tees were indeed green in December and January. Why, I asked?

The old terminology of “winter rye” had been applied to these courses for flowing green grass fairways against a backdrop of dormant rough. It was truly had eye-popping appeal.

But looks can be deceiving, according to golf course superintendents, who over the last decade have embraced the use of colorants, or painting fairways, tees and greens, noting that it can be more beneficial to playing conditions in the long run across central and eastern North Carolina.

When colorants and pigments first arrived on the golf scene the products put off a blue hue some of the time, creating an unappealing look. But like most technology over the last decade, the painting products from such firms as BASF and Geoponics have been perfected and are now used more widely than rye grasses across the portion of the state that uses bermudagrasses and not bent.

“Painting fairways is really an art, literally,” said Bob Farren, Pinehurst’s director of golf course maintenance. “In fact, our new service center manager that we just hired to come in, part of his expertise as a superintendent down on the coast was working with spraying and droplet size to enhance painting.

“The key to painting is you want to start with a really good product. And the other is painting an even application just like you would take a roller and paint the walls in your house. It’s not any different making sure you get a good application on. We’ve gotten to where we’re painting later and later into the season because our growing season in the Sandhills just seems to go on longer and longer.”

With Pinehurst Resort play tapering off in mid November into December, Farren says he won’t paint the fairways on courses Nos. 2, 4, 8 and 9 until early January, hoping to just apply one more application or spot treatments before the emergence of the bermudagrass in mid March.

Farren, who last seeded one of his resort courses in 2009, and others say the cost of painting grass is 7-10 times cheaper than overseeding, however almost all superintendents argue they paint because of better turf conditions come spring, and not necessarily because it’s less expensive.

But less than 10 minutes down the road in Southern Pines, another iconic resort — Pine Needles and sister course Mid Pines — still overseeds each winter season.

“When we get a beautiful day we have all the people in the surrounding area try to come and play our two courses because they are overseeded and look so beautiful,” said longtime Pine Needles superintendent David Fruchte.

Fruchte did admit that discussions have been held about painting and what the best option will be for Pine Needles next winter when the USGA returns for the U.S. Women’s Open in the spring of 2022.

“Our clientele expects us to overseed with the rye grass,” he said. “We have a lot of customers in the spring time coming from the North and they like to play on green grass, so we try to give it to them that way.

“There was one year in the last 30 years that I have been here when we skipped overseeding fairways after we changed the grass over from common bermudagrass to 419,” Fruchte added. “We did overseed the rough but not the fairways and we got a lot of flak for that.”

There are arguments that rye grass impedes the bermudagrass from re-emerging in the spring, and that more specific and expensive herbicides are needed to control weeds that often get tracked on to putting surfaces.

“The two grasses will compete with the rye grass canopy shading out the bermudagrass, because bermudagrass requires a lot of sunlight,” said Lonnie Poole Golf Club superintendent Brian Green. “We only overseed the driving range tee now, which is common at a lot of golf courses in the Triangle. And the first place you will see poa annua at courses is on the putting green or if people overseed the pars 3 tees those greens will have more poa annua.”

When Green first got to Lonnie Poole seven years ago they did overseed the tee boxes, then went to overseeding just the tees on the par 3s. Now they use mats on the pars 3s in the winter months.

Lonnie Poole’s 15th fairway was used as a testing ground for overseeding a few years ago. And while that was happening, Green decided to paint the second potion of the fairway to compare and contrast the look. And maybe entice his boss to give painting a try.

“With the resort type of courses you can certainly justify the added expense of painting, and possibly overseeding for increased revenues,” Green said. “In our case and with most public courses, there is no case to justify adding a $16,000 expense in the winter.”

The added expense with putting down rye comes from a variety of levels, including adding mowing and labor, water, herbicides and the increasing cost of seed.

There is another benefit to using colorants.

“We start mowing bermudagrass here the first week of April in Raleigh, so painting would help speed that process up,” Green said. “It’s just like pavement; black pavement is hotter so with painting you have a darker surface that increases the soil temperatures a little bit.”

The negative side of painting?

“You do run into situations in February and early March with cart traffic and all those things that it becomes unsightly and you don’t have much tissue to paint on; you are painting on dirt or sand turf, and it doesn’t work as well,” Farren said.