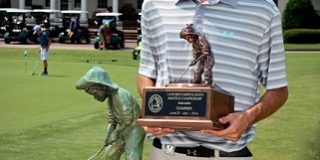 Tim Conover of Holly Springs survived a do-or-die playoff just to make the match play field and then posted a series of stunning victories to capture the 116th Men’s North & South Amateur Championship at Pinehurst No. 2.

Seven players ended 36 holes of medal play at 151 and a playoff was needed to determine which five made the 32-man bracket. Conover survived and secured the 31st seed.

The East Carolina University rising junior opened match play with a 2-and-1 decision over No. 2 seed Tyler McDaniel, then beat Nick Hardy with clutch birdies on the 20th and 21st holes. In the quarterfinals, he won the final hole for a 2-up win over N.C. State recruit Benjamin Shipp.

In the semifinals, he beat William Register, a UNC rising junior from Burlington, by a 3-and-2 count. That set up the championship match with Northwestern rising senior Andrew Whalen. Conover took command early, winning four of the first five holes, and went on to a 4-and-2 decision.

Kristen Gillman, who will join the SEC Champion Alabama golf program this fall, added to her crowded trophy case by winning the Women’s North & South Championship at Pinehurst No. 2.

With a U.S. Amateur title in her collection alongside numerous junior titles, Gillman was dominant in the North & South and capped off her week by turning back a future SEC opponent in South Carolina’s Katelyn Dambaugh, a rising senior.

Gillman qualified as the ninth seed, then survived a 1-up first-round match.

There were no close calls after that. She won next two matches by 7-and-6 and 6-and-5 margins and then used three back-nine birdies to close out Dambaugh on the 16th hole for a 3-and-2 win.

Overbey rolled in a 60-foot birdie putt on the 14th hole at Bermuda Run’s West Course and followed up with another birdie on the 15th to end the match.

Her toughest match came in the semifinals and it again was a hot putter than helped finish off two-time defending champ Mallory Hetzel of Waynesville. The back-and-forth match turned on the back nine when Overbey erased a 2-hole deficit with wins at the 11th and 14th holes. It remained even until Overbey cashed in a 9-foot birdie chance on No. 18 to claim her first Carolinas Golf Association title.

After qualifying fifth in the medal play portion of the event, Overbey opened match play with a 2-and-1 win over Ann Elizabeth Gore of Lexington, S.C., and followed with a 3-and-1 victory over Carley Cox of China Grove.

Sarah Bae, Overbey’s teammate at N.C. State, was qualifying medalist with 68 while Overbey shot 73. Bae lost on the 19th hole to Kayla Thompson of Whiteville in her first-round match.

Overbey’s summer will continue with the U.S. Women’s Amateur at Rolling Green Golf Club in Springfield, Pa., on Aug. 1-7. She was runner-up in the sectional qualifying event at Sapona Ridge Country Club in Lexington where her 3-under-par 68 tied Anna Redding of Concord for second, two shots behind Nasa Hataoka of Japan.

Viraj Garewal, five down going into the final round, fired a 5-under-par 67 and walked off with a four-shot victory in the American Junior Golf Association’s Judie Oppenheimer Memorial at Hilton Head Island on July 21.

It was the first-ever AJGA win for the Panther Creek High School rising senior in 12 appearances.

Garewal was tied for sixth after opening with 73-75 at Oyster Reef Golf Club and, but he got it going early in the final round with birdies on his first two holes. He added additional birdies at Nos. 6, 7, 9 and 11 before closing with a lone bogey on his 31-36 card.

It was the only round in the 60s all week among the 54 players in the field and tied his personal best in tournament play.

Austin Bonfiglio of Holly Springs, a rising senior at Middle Creek, led after 36 holes with 70-73 but he slipped to 80 and settled for a tie for fifth with Quinn Riley of Raleigh.

Jacob Bridgeman, a rising high school junior from Inman, S.C., ran away to a 9-shot victory in the Carolinas Junior Boys Championship at The Windermere Club in Blythewood, S.C.

Bridgeman, who has verbally committed to Clemson, fired 69-68-68 and led after all three rounds. Zack Gordon of Gaffney, S.C. settled for second with 73-69-72.

Hawkins, a rising high school junior, needed one extra hole to turn back Kathleen Sumner of Charleston, S.C., after they had tied after 54 holes. Hawkins shot 69-74-71 while Sumner posted 72-73-69.

Adrienne Millican of Fuquay-Varina (2000) and Eleana Collins of Pinehurst (2006) were the others to accomplish the same-year sweep of the two junior majors.

Riley Smyth of Cary, who lost to Hawkins in a playoff for the State Trusted Choice Big I Championship earlier in July, finished third at 220, six shots back. Smyth had rounds of 76-73-71.

Justin Emmons, who won the North Carolina high school 2-A championship as a Providence Grove junior in May, added an even more prestigious title in July when he won the Trusted Choice Big I state championship.

Emmons, up by three shots going into the final round, built his lead to five when he fired a 3-under-par 33 on the front nine of round two. Armistead, playing in the group just ahead of Emmons, made a spirited rally with birdies on three of his final four holes but fell a shot short.

Blake McShea of Zebulon tied for third with 74-70.

The top four finishers from the 93-player field all qualified for the national championship Aug. 1-4 at Del Paso Country Club in Sacramento, Calif. The field will include 99 players representing 41 states.

Emily Hawkins captured the N.C. Junior girls championship in June and kept her momentum going with another state title in July.

The high school rising junior from Lexington captured the Trusted Choice Big I Championship at Longleaf Golf Club in Southern Pines in early July. She and Riley Smyth of Cary both finished at 146 in the 36-hole tournament but Hawkins took the title when she rolled in a 20-foot birdie putt on the first playoff hole. Both players earned invitations to the national Big I Championship Aug. 1-4 at Del Paso CC in Sacramento, Calif.

Nicholas Lyerly, who won the North Carolina Amateur in June, came within a couple shots of adding his second big trophy of the summer in July.

Lyerly, a rising senior at East Rowan High, was four shots back of Floridian Alberto Martinez going into the final round of the North & South Boys Championship but fired a 3-under-par 69 to close the gap to two. Lyerly had opened with 74-71. Martinez, meanwhile, was steady with 71-70-71 for a 212 total.

Cooper Sears of Old Hickory, Tenn., tied Lyerly for second at 214. Spencer Oxendine of Fayetteville tied for ninth with 70-76