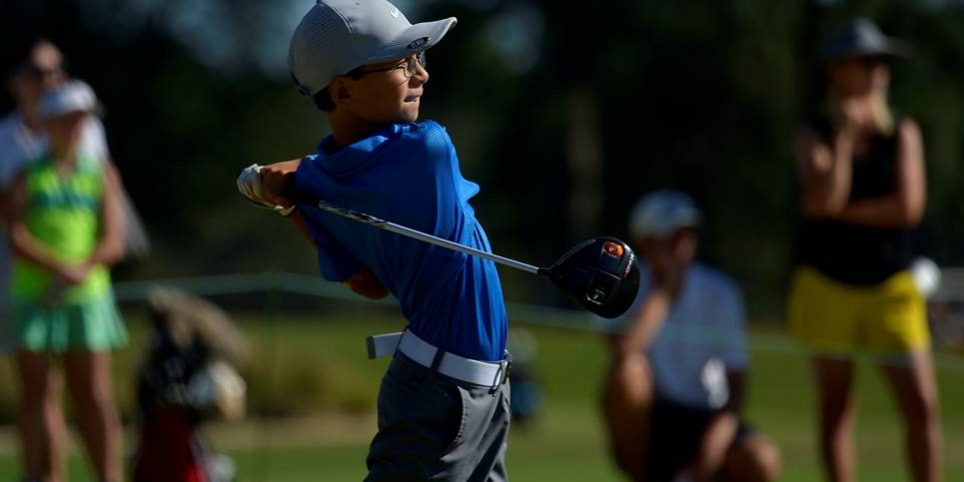 Griffin Ching fully understood that two points was the difference of a chip rolling an extra foot or two.

That, however, could not mask the disappointment of finishing second at the Drive, Chip and Putt Championship’s regional qualifier at Pinehurst Resort & Country Club’s No. 2 Course in early September.

“It was all good,” said Ching, 9, who was competing in the Boys 7-9 age division, “but I just wish I could have hit a few chips closer to the hole.”

Had just one of Ching’s three attempts in the chip portion of the three-skill competition rolled into a higher ring other than 2 points, he would have advanced to the fourth Drive, Chip and Putt Championship’s National Finals at Augusta National Golf Club in April.

“Yeah, that would have been exciting,” said Ching, who attends Willow Oak Montessori in Chapel Hill. Ching is the first alternate from the Pinehurst regional.

Of the 80 players from five Southeastern states that made up the eight age divisions — Boys and Girls, ages 7-9, 10-11, 12-13, 14-15 — 14 were from North Carolina. Including Ching, Justine Pennycooke of Cary, and Carolina Duggan of Holly Springs also qualified.

None of the Triangle’s trio advanced to the national finals, but Ching and Pennycooke did medal in their respective age divisions.

Ching finished third and first, respectively, in the driving and putting disciplines, while Pennycooke placed third in the Girls 10-11 putting. Pennycooke finished seventh overall in the 10-player age division, while Duggan finished sixth overall in Girls 14-15.

The Drive, Chip and Putt Championship is a golf development initiative that was founded in 2013 by the Masters Tournament, United States Golf Association and PGA of America.

Though Ching’s father, Todd, is director of tennis and wellness operations at the Governor’s Club, Griffin has gravitated more toward the longer stick and ball sport.

“His mother and I both grew up playing tennis and competed at a high level, so we felt encouraging them to do something different wasn’t a bad thing,” Todd said. “When he chose golf, we were OK with that.”

Ching began playing golf when he was 6, so is still developing and relatively new to the competitive golf scene. In August, Ching tied for 81st at the U.S. Kids Golf’s World Championship’s Boys 9 age division at Pinehurst’s No. 1 Course.

“I like that you can play it by yourself,” Ching said, “plus there are a lot of lessons you can learn.”

“A lot of these experiences are new to him,” Todd Ching said. “Even though he got a low score in chipping, he came back and finished high in putting. So he did a good job of working through the disappointment.”

Similar to Ching, Pennycooke, 10, a sixth grader at Davis Drive Middle School, is developing her own identity in the game. Like a majority of the participants at the regional qualifier, Pennycooke got into the game thanks to her father, Norman.

The method was a little unconventional, however.

“When she was little, she would go around imitating swings of members at the Yolo Fliers Club,” said Norman, who at the time was a member at the Woodland, Calif., course. “She did them well.”

Pennycooke laughs at the memory.

“It was funny,” said Pennycooke, who in recent years has been honing her game at the Dona Lerner Golf Academy based out of Brier Creek Golf Club in Raleigh. “In the beginning, playing golf made me feel free. It made me feel like I wasn’t alone.”

She was in good company in Pinehurst and the experience exposed areas in which she needs to improve.

“I did OK,” she said. “I hit two drives out of bounds and just got 12 points. Overall it was a great experience, but I also need to work on my chipping.”

“One of my biggest concerns is that I’m not big on practice,” she said, “but I do consider myself competitive.”

If she somehow masters the art of practice, she may someday find herself at the home of the Masters.