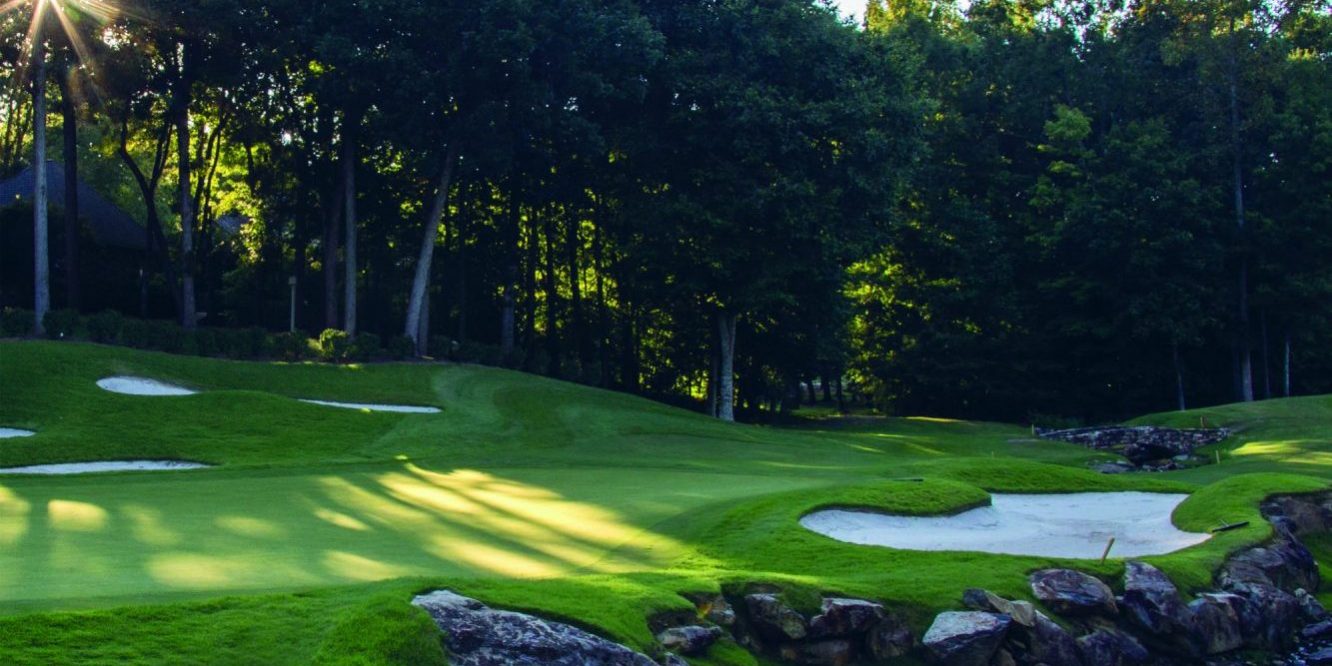 Predicting real estate growth is far from an exact science. With the Research Triangle Park situated virtually equal distance from Durham and Raleigh, who knew more than 25 years ago that Wake County would become the king of bedroom communities and that its counterpart to the west would be playing catch-up ever since.

Certainly not the developers of Treyburn Country Club, a private Tom Fazio-designed layout that remains as peaceful a setting for an 18-hole round of golf as it did a quarter century ago.

And certainly not McConnell Golf founder and CEO John McConnell, who saved Raleigh Country Club from extinction and has since built a golfing empire of 12 private clubs in three Southeast states– including the purchase of Treyburn 10 years ago. McConnell was keen on compiling a portfolio of big-name architects so a Fazio design was an attractive buy, and so was the prospect of population growth in north Durham.

The magnificent vision of Fazio remains, but the potential growth has waned. But for how much longer?

“Durham has nowhere to go but north now,” says Treyburn director of golf Tag Wylie, who heads into his 16th season at the immaculate layout. “It can’t go in any other direction – so that means new schools, younger families; and there are jobs up here so we’re going to get more people as we go. That was the vision a long time ago, but Durham decided to go in different directions before it came up this way.”

How good is Treyburn Country Club?

Well, it is the No. 1 visited club in McConnell Golf’s unique reciprocal membership offering, Grammy Award-winning saxophonist Branford Marsalis is a member and it was the golf course of choice for No. 23 when his son attended basketball camp at UNC. In fact, MJ still has a locker here.

Wylie is somewhat biased, but he wasn’t in 1990 when he played college golf at N.C. State. With a dozen courses his teammates could play between campus and northern Durham, the team chose to make the drive to log practice rounds at Treyburn.

“Once we figured out how good it was we came up here at least once or twice a month,” he said.

“Every hole is its own different entity,” Wylie added. “The greens are very difficult to putt. She is not terribly long, but during the PGA Tour schools here it has taken over par to advance, so it’s a tough booger. If you put it in the wrong spot here with the greens up to speed it’s over, you’re really going to grind to get a bogey.”

John Wagner, now retired, has been a member of Treyburn for more than a decade. Wagner was responsible for the site location and plant construction of the Merck Center for Vaccine Manufacturing in nearby Treyburn Corporate Park. He closed on his house in the Treyburn community at 1 p.m. and joined the club less than two hours later.

“Mr. McConnell has the resources to weather some storms and to put together a portfolio and have patience to get some of these properties going in the direction he wants,” Wagner said. “I give him a lot of credit for that, and they are very active in the community. So, when you put together the whole package I’m thrilled to be a part of it all. I feel blessed to be a part of McConnell Golf.

“It’s almost like having our own private golf course with our own small group of people,” Wagner added. “But we also understand the financial realty of it and that we need to attract more members. Whatever that number is we need a nice balance that would keep it an intimate feeling country club, yet enough to be able to sustain it and open up more social opportunities.”

The McConnell executives have certainly spent countless hours trying to increase the membership rolls at what truly is regarded as one of the best golf courses in the golfing-rich Tar Heel State.

Lauri Stephens, McConnell Golf’s vice president of membership, has even instituted some creative solutions, including a Junior Executive offering which is available to those under the age of 45 for as little as $1,000 down and $295 per month. A new National Non-Resident membership recently unveiled by McConnell Golf could also help Treyburn. For example, a candidate for such a membership is Durham Bulls pitching coach Kyle Snyder, who lives in Florida half the year and is here with the Triple-A club the other six months. He was playing Treyburn the other day as a national membership prospect.

“We have had to kind of reinvent ourselves,” Stephens said. “Our focus today is the younger, junior member and we’ve really gotten aggressive in our offers. We believe there is a lot of opportunity there now in Durham with the city doing so well. Our focus is just to get the word out. If people realized what they would have by joining Treyburn under a McConnell corporate membership it would just take off like it has here at Raleigh Country Club.”

But RCC is just 3 miles from downtown Raleigh, while Treyburn hasn’t been able to shake the stigma of it being a “far drive.” In reality, Treyburn is just 35 miles from TPC Wakefield Plantation, and 53 miles from RCC.

“Basically, we’re the course in the countryside for the members of Wakefield and Raleigh, who have bigger, busier memberships,” said Wylie, noting that Treyburn logged a modest 14,000 rounds in 2015.

“The most positive thing is we try to bring the fun every day for all McConnell Golf members. We have that ‘rustic, I’m out in the country feeling’ and we’re away from the busy, jamming places and all the construction. If you are a salesman or entertainer of clients McConnell Golf has golf courses in every major city in North Carolina. You are treated like gold here. The McConnell Golf experience for corporate people is a layup if you ask me.”

Like Wagner, Kathy Porter headed south from Pennsylvania because her husband’s job with Merck. Mrs. Porter took up golf a few years ago and now can’t get enough of the Treyburn experience.

“I left kicking and screaming from Philadelphia and now you can’t get me to go back,” she said.

“Treyburn definitely is a wow,” added Stephens. “Every time I am there I am blown away by its beauty. It’s cool … just the setting, the piece of land it’s situated on and Fazio did a great job setting the golf course in there. All I hear from our members in Raleigh is that ‘it’s totally worth it.’ I’ve never heard anybody say they went up there and regretted it. They all says it is 100 percent worth it.”