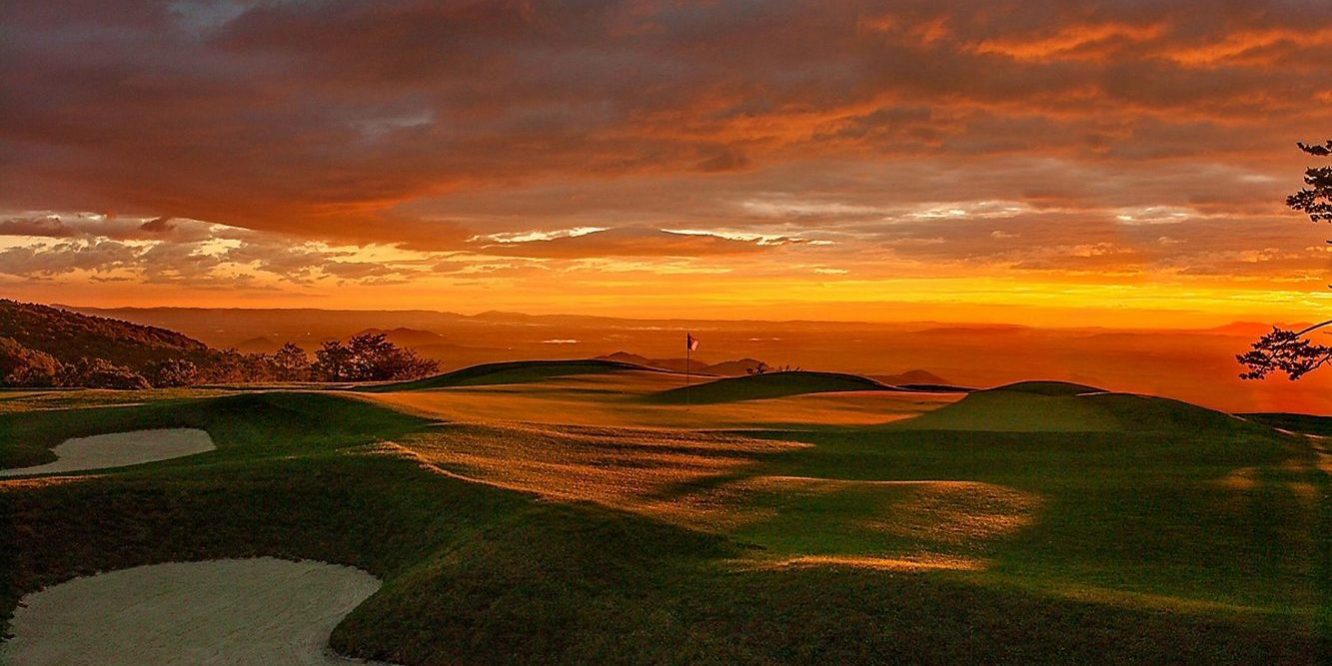 The hamlet of Roaring Gap in Allegheny County consists of a gas station, a post office … and a trio of heralded golf developments with unique, centerpiece mountain layouts all within a single mile of one another.

Roaring Gap Club, High Meadows Golf & Country Club and Olde Beau Golf Club attract members and guests from an hour away in Winston-Salem, along with Charlotte, Greensboro and High Point, all within a short, hour-and-a-half drive, not to mention elsewhere around the state and the Southeast.

Making the final, winding 10-mile trek up U.S. 21 to Roaring Gap’s elevation of 3,000-plus feet, there is a noticeable change not only in temperature — typically about 10-15 breezy degrees cooler than below — but also the fast-paced, big city distractions that tend to evaporate as the colors of the surrounding hills start to explode.

“It’s a different way of life,” said High Meadows general manager Mark Updike. “It’s more emotions than anything you can put a finger on.”

If members and guests ever are inclined to depart their developments, Stone Mountain is just a stone throw away. River tubing or kayaking is not far; or downtown Sparta and Elkin, as well as well-maintained mountain roads for motorcycling or casual drives. A percentage of the local golf club members are full-time residents, a percentage are from the Deep South and Florida, who annually move to the area from around May through November, while arguably the largest percentage are weekenders who work and primarily live in bigger cities nearby.

On the other side of the coin, out of North Carolina’s 100 counties, Allegheny County typically ranks annually as the poorest or second to last. The impact of Roaring Gap, High Meadows and Olde Beau, and their members, guests and employees is immense, not only in raising the Allegheny County’s tax base, but also by giving back throughout the community.

“We are proud to be part of Allegheny County,” Updike said. “It’s not just about the big money; it’s the little things we’re trying to do to make the county better. (All three clubs) are putting their hands out where we’re supposed to.”

Back in the late 1920s, the automobile ride to the area called Laurel Branch for the creek that fed its centerpiece, Lake Louise — 67 acres of beautiful, clear water — took longer than today, but was equally smooth and enjoyable. Earlier in the decade, the roads had been paved during an era of rapid progress after U.S. 21 crested the mountain. The direct route came by way of some of the most progressive centers of industry in the state at the time, which specialized in furniture, tobacco and textile manufacturing.

The paved roads gradually turned the route into a major thoroughfare known as the “Lakes-to-Florida Highway,” connecting motorists between the Great Lakes region in Ohio and southern destinations along the east coast of Florida. That was around the time that a handful of Winston-Salem’s most prominent businessmen finalized long-bandied plans to develop a private vacation community in the area — eventually naming the relaxing gathering spot for their friends and families in an invigorating mountain climate “Roaring Gap,” in honor of the mighty roar the wind produced as it passed through the surrounding peaks.

To serve as the club’s first president, the group hired Leonard Tufts, second-generation scion of the Massachusetts family that founded and operated the relatively new and highly successful Pinehurst Resort in the state’s Sandhills region. Tufts knew he could market Roaring Gap as an attractive resort enticement for his mostly Yankee Pinehurst clientele who had tired of the trip back north every summer. So Tufts commissioned the most famous and prolific golf course architect in the world, Donald Ross, to design a mountain masterpiece 3,700 feet above sea level that Tufts promoted as the “Pinehurst of the Hills.”

One North Carolina newspaper described Roaring Gap as having “the finest mountain layout in America.” Likewise, the Elkin Tribune proclaimed that Roaring Gap featured the highest golf course, save one, east of the Rockies at the time, and that there were no other courses from which golfers could see stunning panoramas that spread out to the horizon in every direction. According to the Pinehurst Outlook: “One could see 125 miles across the Old North State to King’s Mountain on the South Carolina state line.”

In addition to its celebrated Ross-designed golf course, guests of the 55-room Graystone Inn at Roaring Gap enjoyed swimming, canoeing and other water sports around Lake Louise, which was stocked annually with Brook and Loch Leven trout for sport fishing. Horseback riding was a big draw as bridal paths and trails traversed the entire 1,200-acre tract. Other activities, such as tennis, trap shooting, archery, polo and fox hunting, helped secure Roaring Gap’s rightful place among America’s preeminent summer sports paradises.

Fast forward to the turn of the 21st century, when Roaring Gap hired Kris Spence — a golf course restoration specialist from Greensboro — to help reclaim Ross’s architectural pedigree at Roaring Gap, while also updating the design for modern play. Roaring Gap’s decade-long restoration project recaptured the original size, shape and dimension of nearly every bunker, tee and green on the golf course.

Today, there are many distinctive golf holes that help make Roaring Gap an unforgettably unique golf experience including the iconic sixth, which sports a volcano-shaped green on steroids. In addition, the 17th green is perched dramatically on a 2,550-foot bluff with 75-mile views across the heart of the Piedmont foothills. Rare architectural features also populate the golf course such as punchbowl greens, merging fairways, reclaimed cross-bunkers and bunker-less par-5s. At 6,450 yards, what it lacks in length, Roaring Gap makes up tenfold in charm and character.

Following Spence’s immaculate restoration of the Ross classic, Roaring Gap debuted in Golfweek magazine’s 2016 list of the “Top 100 Classic Designs in America.” Roaring Gap also jumped to No. 12 in the state in the new “Top 100 Golf Courses” list just published this spring. Perhaps even more impressively, Roaring Gap will also be featured as one of renowned designer and author Tom Doak’s “Gourmets Choice” selections in the renewal of his architectural cult classic “The Confidential Guide,” scheduled for release in early fall.

A “Gourmet’s Choice” is Doak’s premier award given to those select golf design that Doak says “stir the soul” and that he would “most likely take a good friend to play.” Only one course is selected per architect, meaning Roaring Gap represents all Donald Ross-designed courses in North America.

The High Meadows clubhouse, originally designed by Claus R. Moberg, an acclaimed architect from Blowing Rock, was constructed in 1966. Following some restoration work around its 50th birthday, the facelift has continued recently with the addition of a new roof, a new portico, and new carpet, floors, paint, draperies and cabinetry around the dining room and throughout the clubhouse.

“Going into our next 50 years we really wanted to freshen up the clubhouse and put our best foot forward,” Updike said. “We’ve done it all with member support.”

The High Meadows golf course was originally designed by Savannah, Ga., native George Cobb, a scratch golfer who began designing courses during his military service and who later sketched the Par-3 course at Augusta National among many other popular layouts around the southeast. Construction at High Meadows began in 1963 and Cobb was on site regularly. The original first nine opened in 1965 and the back nine a year later.

The only golf course in Roaring Gap open year round, Cobb’s layout at High Meadows is a classic that gently rolls over hills and valleys while serving up breathtaking views, with no arduous climbs and no two holes alike. The course is impeccably maintained and takes full use of the wonder provided by Mother Nature. Laurel Branch Creek crosses the golf course on holes 13 and 14, while meandering streams and ponds come into play at various intervals around Cobb’s layout.

In 1985, one of Cobb’s associates, John LaFoy, completed a revision to the course and provided the club with detailed drawings of each hole, which have been used as an aid for golf course improvements through the years. The signature 12th hole tee offers a spectacular view of the lake with the mountains of Southwest Virginia in the background; while the par-5 finishing hole plays around two lakes and a green complex guarded by a deep bunker front and left.

Following major work on the green complexes and bunkers this winter, High Meadows is now beginning construction on a new short-game practice area, with a variety of bunkers, along with a new chipping and putting green to allow members and their guests to effectively and comfortably practice all elements of the short game.

“We invested in new equipment for the golf course, so we came back better than ever this spring,” Updike said. “Across the board we’re really trying to make the club shine.”

High Meadows head pro Todd Hutcherson, a Winston-Salem native and accomplished tournament competitor, has continued a Pro-Am program by hosting a late summer event that to date has raised more than $43,000 donated to the non-profit Allegheny County Foundation. Club members have also conducted a “Boot Drive” to ensure that no local children go to school in the winter without a pair of boots. In addition, the High Meadows Ladies Golf Association has donated backpacks filled with school supplies.

“Our members are constantly doing good things around the community,” Updike said. “They’ve provided crazy, incredible support helping the kids in our community who need a hand.”

When first established in 1991 directly across from High Meadows, Olde Beau Golf Club was almost immediately billed as the “Augusta of the Smokey  Mountains,” while two-time U.S. Open champion Curtis Strange described the design as “one of the greatest mountain courses ever built.”

Named for the original developer and golf course designer Billy Satterfield’s faithful bulldog and constant companion, Olde Beau lives up to the hype. Golfers feel as if they are playing on top of the world as they navigate Olde Beau’s emerald green fairways overlooking an ever-changing palette of color of wildflowers, rhododendrons and seasonal foliage.

Constantly providing scenic, long-range views, elevation changes galore, immaculate greens and well-maintained fairways; Olde Beau is a true example of a mountain course, with a postcard setting on every hole. Golfers often see more deer and other wildlife than people. The course has more than 1,500 feet of elevation change and a back nine that is truly breathtaking

In addition, while Olde Beau’s neighbors on either side — Roaring Gap and High Meadows — are private developments, the Olde Beau general partnership has taken a different approach. Former basketball star and analyst Billy Packer, who has been a co-owner at Olde Beau since the early 1990s, described the semi-private club as “the greatest quality value in the Blue Ridge Mountains,” in an interview with Golfweek magazine.

With streets named for some of Scotland’s most renowned golf courses and a clubhouse that highlights everything wonderful about the Blue Ridge Mountains — from the stonework reminiscent of the Blue Ridge Parkway to the incredible distant vistas of mountains and sunsets — Olde Beau truly offers all anyone could want in a golf course development and more. The average age of residents ranges from the late 50s to early 60s, from young families to retirees, with a mix of seasonal and permanent residents.

Outside, there’s a heated pool, two tennis courts lighted for night play and more than 5 miles of hiking trails. The scenic Blue Ridge Parkway and 13,500-acre Stone Mountain State Park are nearby, and Olde Beau is in the heart of North Carolina wine country — seven Yadkin Valley vineyards are located within minutes.

Most enticing for guests, Olde Beau offers a limited number of villa and cottage rentals, priced from $130 per night. Guests can purchase discounted rounds of golf and may use all community facilities, including the recreation complex, clubhouse and grill. Meanwhile, the High Meadows Inn offers in-town accommodations, and the community has plans for an on-site lodge.