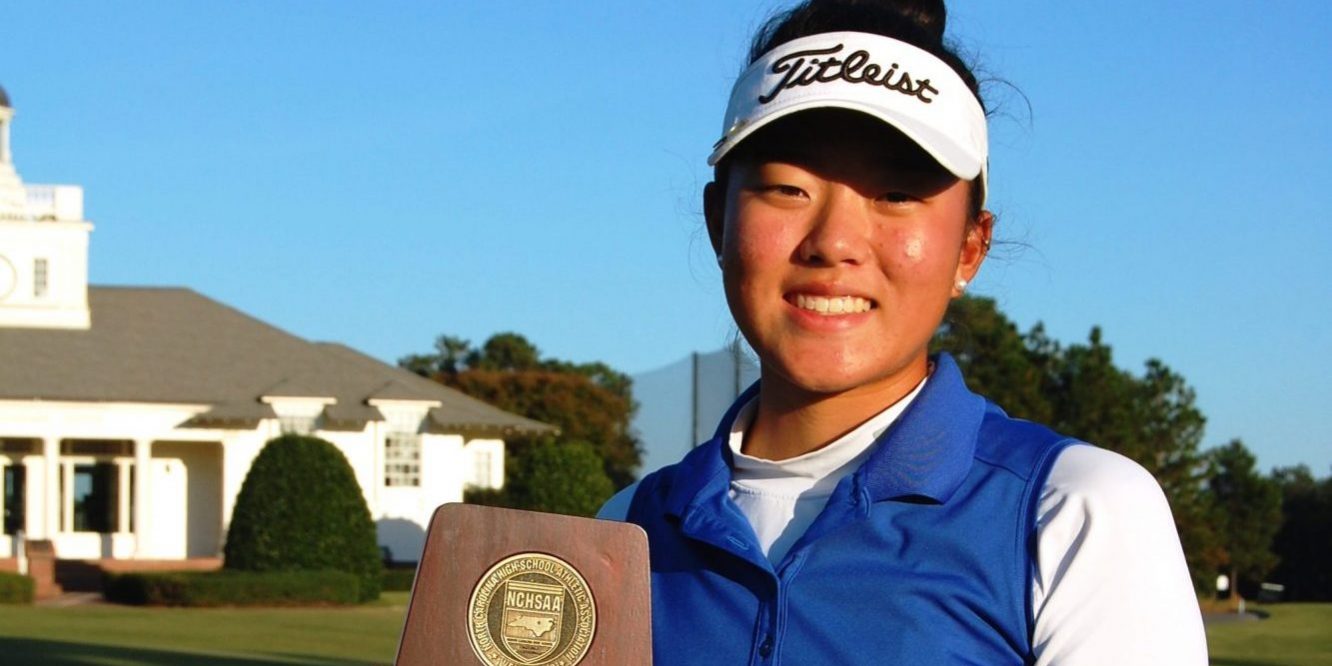 The comparisons are natural, since Triangle-area prep stars Jenny Chang and Gina Kim have parents of Asian descent, are high school juniors, each have multiple state championships – and each spends hours upon hours practicing ball striking, putting and their short games.

Who is better? Or maybe we should say: Who will be better on the LPGA Tour after college life?

It’s open for debate as both golfers continue to mature and hone their games. Kim can low … while Chang is the model of consistency.

“People know us as rivals because we’ve been playing against each other for a long time now and we’re both so committed, but we’re really close and great friends,” Chang said of Kim. “And both of us know if you want to improve your game you have to put in the hours to get better.”

Chang uttered those words less than 30 minutes after capturing her third straight 4-A state championship after two consecutive 71s on Pinehurst Resort’s No. 5 course. And less than 10 minutes away, Kim was securing her second straight 3-A crown at Longleaf Golf & Family Club.

Chang, who beat Charlotte Catholic’s Keri Kenkel by one stroke, will be gunning for a record fourth straight individual title next fall. Many golfing experts believe if anyone can pull off the remarkable feat it is Chang.

“It doesn’t surprise me because Jenny plays such a big national schedule, she can handle the pressure of it and it doesn’t seem to get to her,” said Lochmere director of instruction Ben Hynson, who has been Chang’s swing coach the last four years.

“It’s a lot of pressure because people have high expectations for me to win,” Chang said. “Four years is going to be a record. I’m excited for next year.”

At times, Chang is gone for 3-4 weeks at a time, traveling the junior golf circuit across the country. She even played in Canada this summer as a member of the United States team at the prestigious World Junior Girls Championship.

“Generally, Jenny is a top 10 player in the national events,” Hynson said. “She is very consistent and doesn’t make a lot of mistakes, and if she does make a mistake she really doesn’t let it get to her. She is pretty even emotionally.”

Case in point at the state championship in late October. Knowing the individual race was close, her drive hit a tree on the 16th hole and she carded a bogey, but rebounded on the next hole with a birdie that ended up being the margin of victory.

“There are a lot of things about Jenny that are unique, but one is she loves golf, and she loves every part of it – not just playing in the tournaments but she likes practicing,” said Athens Drive coach Dave Snyder.

“And she is driven internally, not by someone telling her what to do,” he added. “She just wants to get good. And when she’s out on the course she doesn’t get flustered. If there is a bad break she accepts it and moves on.”

Chang has verbally committed to play college golf at Southern Cal, one of the nation’s top programs. The Trojans will be getting quite a player in 18 months.

“Jenny has needed to learn how to close a match and close a tournament; she really didn’t have that aggressive instinct over the last nine holes,” Snyder said. “What has happened in her bigger tournaments this year is she has finished strong.  That is kind of a sign of how she has improved her game.”

Hynson estimates he has spent “hundreds of hours” on the practice range or short-game area with his prize pupil, and the two, along with Chang’s parents have become close.

“She is a feel player,” Hynson said. “We don’t work on a lot of mechanics. You show her and work her through the positions that she needs to be with her swing and she takes it and does it. When she’s working she’s working on developing a feel for what we’re talking about. If you try to get too technical with her … well, she’s just not wired that way.”

Meanwhile, playing with a nine-shot lead over Cardinal Gibbons after day one, Pinecrest cruised to a 10-shot team victory behind the strong play of junior Mackenzie Battle and senior Elizabeth Nguyen for the program’s first state crown since 2001.

The men’s program at the Southern Pines school had captured three of the last four 4-A crowns.

The victory capped off an undefeated season for the Lady Patriots, who had finished third and second twice at the state championships in the previous three seasons.

Cardinal Gibbons never really made any move up the leaderboard on the second round at Pinehurst No. 5, as Battle shot a final-round 77 to finish in 5th place – an improvement of 17 shots over her performance in 2015. Meanwhile, co-captain Nguyen also carded a steady final-round 77 to place 11th.

“They have a great team and program so we knew it could either way so we’re just so ecstatic it turned out this way,” Nguyen said. “We just wanted to play our own games, play against the golf course and not our opponents.”

Mara Hirtle, a sophomore, was the other player whose score counted, shooting 83-79 to tie for 17th.

The Pinecrest team wouldn’t have been holding the hardware without a newfound dedication to short-game practicing over the last few months.

“At least once a week we would have short game practices where we wouldn’t even go to the range or pull out our long clubs; we would just do short game stuff — putting , bunker shots, pitching – the entire practice session for 2 hours,” Nguyen said.

“They worked hard and I saw a difference in our short game,” added assistant coach Rich Wainwright. “Our team got the ball up-and-down more and that’s what it took.”

Wainwright also offered some incentive during the team’s initial meeting.

“I have two runner-up trophies in my office from the last two years, so I brought them out at said, ‘I would really prefer a bigger one,” Wainwright said.

“And look what happened. I could have done that the first year,” he chuckled.