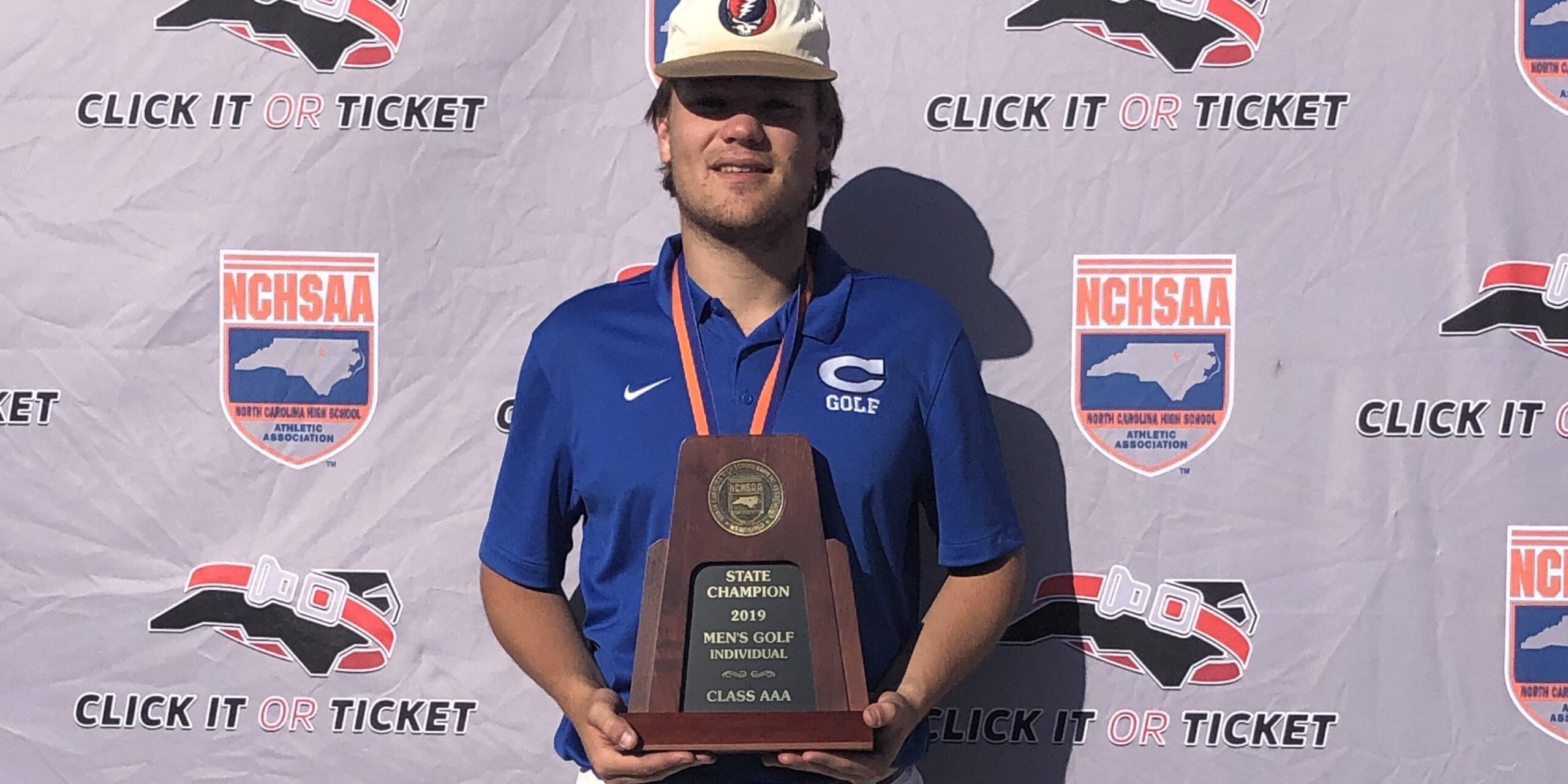 Brady Hooks used the magic he found in a borrowed putter to help him win the men’s 3-A state high school golf championship.

The Clayton senior poured in one long par-saving putt after another in the final round to shoot even par for the 36-hole tournament at Foxfire Resort and Golf Club. He became the first player in school history to win an individual state golf title.

“This is huge,” he said. “This is my last high school golf match ever. I’ve never won a two-day golf tournament in my life.”

Hooks did it in spectacular scrambling fashion that would have made Seve Ballesteros proud. He made at least five putts of 12-15 feet to save par in the last round. And he saved par on other holes with shorter putts.

“I had confidence with the putter and that’s what this game is all about — confidence,” Hooks said. “I stepped up to every putt thinking it was going to go in and they did.”

Hooks did it with a putter he borrowed from the new PGA pro, Monty Elam, at his club, River Ridge Golf Club in Raleigh. Hooks broke his putter during practice about three weeks before the state tournament. Ironically, that was about the same time that Elam arrived at his new job at River Ridge.

“I knew Brady needed a putter,” Elam said. “So, I brought in my whole bag of putters and said ‘use whatever you can.”’

Hooks tried out several putters before settling on the same model, a Scotty Cameron that he had played with before.

Elam has not even seen Hooks play golf yet but he knew him because his father is the general manager at River Ridge and Brady occasionally works in the pro shop.

“I knew Brady was a good player just from what everybody had said,” Elam said. “But to win the state title, that’s incredible. I’m glad to hear my putter was able to help him. But I’m sure it wasn’t all due to my putter.”

Hooks shot a 2-under 70 in the first round on the 6,755-yard Foxfire Red course. He trailed Jack Heath of Charlotte Catholic by one stroke. The two played one group apart in the final round but Hooks was able to keep track of where he stood with help from Moats and other spectators.

“I got updates every couple of holes,” Hooks said.

Hooks learned he had fallen two shots behind at the turn after shooting 38 on the front nine. But then Heath bogeyed the 10th hole and double bogeyed the 11th to put Hooks in front.
Hooks saved par at the 15th hole with a 12-foot putt after having to punch a shot under a tree limb. He came to the par-3 17th hole with a two-shot lead but he hit a poor tee shot into the front bunker. He blasted out and the ball released 20 feet past the hole.

Then came the biggest putt of the day. Hooks hit it and then walked toward the hole with his arms in the air to celebrate as the ball disappeared into the cup for another par save.

Hooks missed the green again at the par-4 18th hole but chipped up to 4 feet and made another par to clinch it. Heath struggled with two more bogeys coming in to shoot 78. Hooks won by three shots over Heath and his Charlotte Catholic teammate Drew Hackett.

Hooks didn’t make the state tournament his first two years in high school, losing once in a playoff, when Clayton was a 4-A school. He made it last year and was in contention but shot 83 in the second round.

Moats, the Clayton golf coach for five years, said he always felt Hooks had the game to win a state championship.

“Brady is an outstanding golfer,” he said. “He’s always had all the different tools needed to play at that level. He’s very level-headed. That’s one of his attributes as a golfer. It goes back to his overall calmness about the game and being able to focus on each shot and stay in the moment.”

Hooks led Clayton to its second straight runner-up finish in the team competition behind Charlotte Catholic. The Blue Comets shot 306-314 – 620 to finish 21 shots behind.

“It really shows the strength of our program,” Moats said. “I think we have a chance to compete for the state title for the next few years.”

Sophomore Tyler Dechellis will take over the leadership role of the team for the next two years. He shot 75-74 to tie for fifth place. He also was the Greater Neuse Conference champion this year.

Dechellis, No. 6 in the state junior golf rankings, already is being recruited by N.C. State. Hooks plans to enroll there this fall and try to make the Wolfpack golf team as a walk-on.