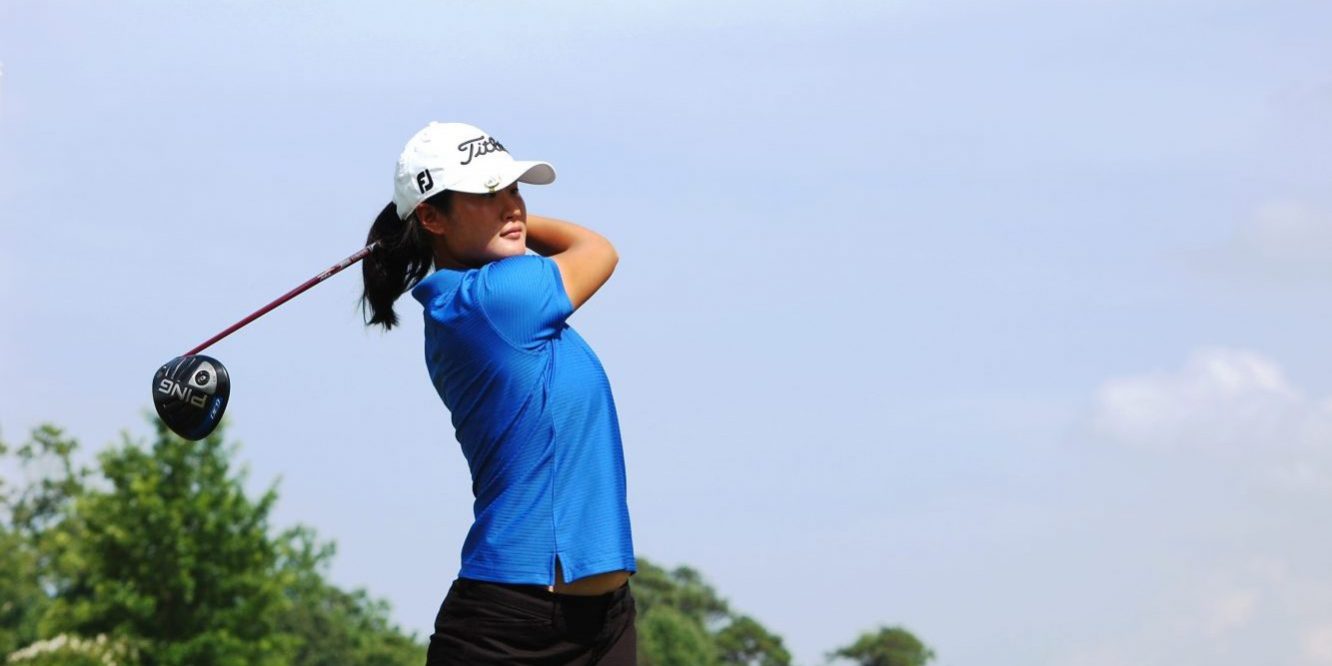 If there was ever a “can’t miss” golf prospect it’s Gina Kim. The rising junior at Chapel Hill High School has skill and talent – and maybe even more importantly – the desire and drive to become the best.

The 16-year-old Kim is the No. 1 female junior golfer in North Carolina, and her scoring average in the 2016 Carolinas Golf Association ranking is a remarkable 71.57. She has already won a state championship and in mid June rallied from a four-shot deficit over her final nine holes to capture the prestigious Rolex Girls Junior Championship.

If Kim is not near the top of the leaderboard then she’s likely not entered in the event. She has become that dominant over the past 12-18 months.

And Kim works at her game – relentlessly.

“This summer I wake up, get my clothes on, eat and go out and practice for about 6 or 7 hours a day,” Kim said. “I pretty much live on the golf course. That’s my summer vacation. Of course, I have some of those moments when it’s hot, it’s kind of hard, but then I think about how much it has paid off and it starts motivating me more to practice more. I just love golf that much.”

Kim is engaging beyond her years and popular in high school, but laughs when talking about not getting invited to any more parties.

“Since I kept rejecting my friends so much because of golf tournaments they don’t even try asking me anymore,” Kim said. “I have pretty much sacrificed my whole social life for all of this, but I feel in the end it’s worth it. It has gotten me to college. I pretty much have goals at my age that nobody else has. I feel there is more fruit to golf than having fun because you can have fun later on in life.”

Kim has committed to play at college powerhouse Duke under the direction of ultra successful coach Dan Brooks.

Kim used to take yearly tours of Duke University with her parents, who moved to the United States from South Korea in the 1990s, and fell in love with the campus before her teenage years.

“The chapel is so neat and I just love all of the architecture,” Kim said. “I wrote an email to the school and coach Brooks saying I was really interested in the school, and called and asked if I could take a visit. I had to wait a year just to take an unofficial visit because they wanted me to wait until I got older and more mature.”

Kim took off a day of high school last September to spend the day at Duke – even attend a class to see what being a student there would be like. It took her just one week to verbally commit to Brooks’ program.

Kim’s rise in the junior golf rankings wasn’t always a certainty. Her steady improvements have come under the watchful eye and guidance of Hall of Fame instructor Ed Ibarguen, who also happens to run Duke University Golf Club.

Ibarguen started working with Kim when she was a 7th grader in May 2013. Kim had been traveling to Greensboro for lessons, but her mother Sangsuk Kim felt the drive to the Triad area was getting to be too much. She began doing research for more local instructors and came across Ibarguen’s name.

“Ed was the coach for Carter Jenkins and Carter was doing so good so my mom felt he would help me too, to be as good as Carter,” Kim said. “After the first lesson I told my mom, ‘This is the guy, we need to stay with him.’ Ed has really taken me to a different level of golf. And I am really grateful for that.”

Since Kim’s swing is so smooth now, it’s hard to imagine that Ibarguen was facing a project back in 2013.

“I quickly assessed her to be a young girl with a lot of potential to become a very good junior player and through hard work, an excellent collegiate player,” Ibarguen said. “But her overall swing motion was generally undeveloped. She had tried to get more power in her swing by lengthening it — think John Daly long — but it was also loose and she didn’t have the strength to control that long of a motion. So, it produced inconsistent impact conditions and a variety of golf shot misses.

“She was frustrated in that even when she struck the ball squarely, there wasn’t much power or transfer of energy into the golf ball. Over the first several months, I discovered that she also lacked inner belief in her ability to play under the pressure of competitive golf.”

However, Kim had a few advantages in her corner.

“She had two great areas of strength that helped make her rapid development possible – an extremely strong parental support system and a tremendous work ethic,” Ibarguen said. “I’ve been teaching golf for over 36 years. I can only think of one other junior golfer (Carter Jenkins) with Gina’s consistent work ethic.

“She has always been extremely coachable. She wants to understand the why behind what I’m asking her to do, and once that is clear in her mind I can count on her to work on it until she owns it.”

As Kim began to develop improvements and consistency with her driver, irons and short game, Ibarguen also worked diligently with his star pupil on her mental outlook to the game and golf course management.

“Competitive junior golf is a journey filled with a few peaks and a lot of valleys,” Ibarguen said. “It’s extremely difficult for juniors to assess how much they are improving along this process. Gina wasn’t immune to these emotions and it was often only her lack of inner confidence that was holding her back from winning tournaments.  This is where the coach can play a critical role in centering the player after misses and defeats in order to understand that they are actually ‘getting it.’ Over the past year and a half she has discovered that inner strength; that confident knowledge that tells you that you are actually VERY good AND that you can win – you can actually ‘do it.’

Kim, who has shot 67 numerous times as her career low round, knows she’s a much different player now and is thriving in the competitive environment.

“It takes a lot of patience to win a golf tournament,” Kim said. “That patience is not something that is going to be handed to you as a golfer right away. It is not something that you can say ‘Oh, I want this’ and it’s going to come right to you. I just think waiting for a chance and waiting for the other players to get pressured and make a mistake, and for you to take advantage of it is a key point to winning. It’s funny the way our brains work when it comes to pressure. It definitely changes things, so you have to wait and trust that you have the skills to get there.”

With two more years of high school ahead of her, Kim doesn’t feel any pressure to keep performing at a high level.

“At first there was pressure for me because golfing kind of determined college life, your future and how to make money, and you keep asking ‘is golf going to be my job or not?”’ Kim said. “But now I’ve started turning it more into a positive thing and motivation. If you truly think you can accomplish all of that then you definitely have the skills to do it, so you should just work harder and keep moving forward and produce the results that show you are a good player.

“The Duke commitment is something that motivates me because I want to represent Duke and the reputation this place has,” she added. “I just find it something that is prideful that I have been chosen by Duke and I should play up to their standards. I try to practice harder because of that. The results have been showing.”

“It has been a lot of fun watching Gina grow into one of the best junior golfers in the country,” Ibarguen said. “I fully expect her to achieve goals such as All-ACC and All-American honors during her collegiate year. There is no doubt in my mind that she will win many tournaments in college and then have an outstanding career on the LPGA Tour. She is now and will become even more so in the future ‘a star’ golfer.”