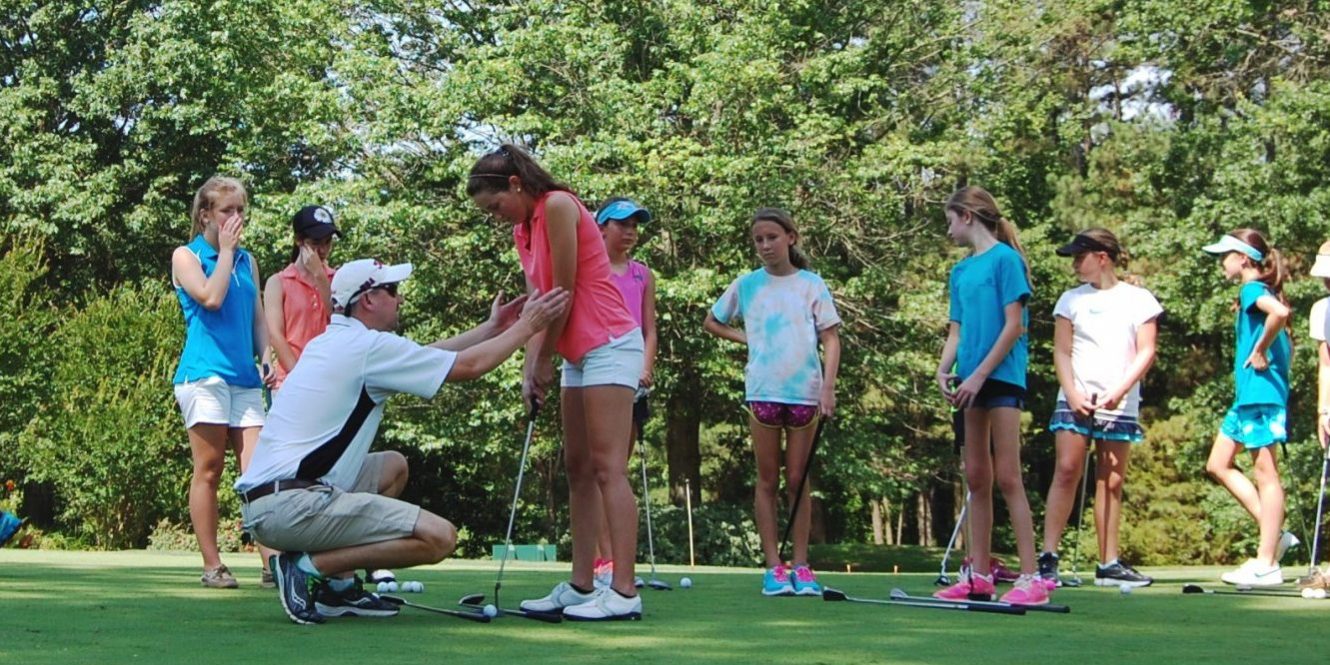 The clubhouse has the look of a two-story home built in the mid-1980s. The 6,473-yard course is stitched tightly through an adjoining neighborhood. The no-frills practice range is a narrow swath of land that features high-rise netting along the right side to keep errant balls from bounding onto the adjacent Strickland Road.

And yet the semi-private course has a growing reputation for developing top-notch junior golfers.

In April, Wildwood Green regulars Doc Redman and Ryan Gerard played in the Junior Invitational at Sage Valley, about 25 northeast of Augusta, Ga. The tournament, which attracts 54 international players, is considered to have the toughest field on the junior circuit, and Redman and Gerard were believed to be the first pair from the same public access course to play the event.

They are also the latest in a long and acclaimed list of juniors from the Wildwood Green pipeline.

“I’m sure any list we make we’re going to be leaving off someone,” said Chip Watson, whose family owns the course. Watson played at Wildwood Green as a junior, played collegiately at Campbell University and later became the club’s general manager. Today, Watson is general manager of N.C. State University’s Lonnie Poole Golf Course and the Wolfpack’s assistant men’s golf coach.

The list would include Kim (Byham) Lewellen, who played locally at Broughton High, became an All-American at the University of North Carolina and has most recently coached the University of Virginia women’s team to nine straight NCAA Championship appearances and two successive Atlantic Coast Conference titles. Also, T.D. Luten, who played at three schools locally, attended Hampton University, later served as director of First Tee of the Triangle and is currently Duke University’s assistant men’s coach; Grayson Murray, who also played at Leesville Road and is currently playing on the Web.com Tour; and Kevin O’Connell, the former Green Hope High standout who became the 2008 ACC freshman of the year while at the University of North Carolina.

Others with ties to Wildwood Green include former UNC star Carter Jenkins, the reigning three-time Carolinas Amateur champion who recently turned pro;  Winthrop University senior Zach Seabolt, the 2014 Big South Conference freshman of the year; and Stephen Franken, who led N.C. State in scoring average this past season as a freshman.

Redman, who will play for Clemson in the fall, and Gerard, a 2017 UNC recruit, ranked Nos. 12 and 34, respectively, in the June 5 Golfweek / Sagarin Boys Junior Ranking. Identical twins Sarah and Jessica Spicer, who played for Northern Durham High’s boys team this spring and will play for Virginia Tech starting in the fall, also played at Wildwood Green.

Luten, who scours the country for potential recruits, believes Wildwood Green is an outlier.

“It was always a welcoming environment,” said Luten, who as a teen washed and parked carts in exchange for practice and playing time. “Being a collegiate golf coach now, I have to think about the environment that a junior golfer comes from and their mentors, the courses they play, where they are a member, who are they getting their lessons from, their golf IQ and knowledge base. I said this before I was a college coach, but Wildwood is just an awesome place for junior golfers.”

Since Wildwood Green’s opening in 1986, management and members have promoted a culture of inclusiveness for junior golfers that Roger Watson created.

The elder Watson was a long-time head club professional at MacGregor Downs Country Club in Cary before transitioning into course development and management. As a member of the North Carolina Sports Hall of Fame, Watson is also known for having defeated Sam Snead in a playoff to win the 1974 National PGA Club Professional Championship at Pinehust No. 2.

“I definitely think it’s a philosophy that was started by Roger Watson,” said Jeff Engelhaupt, Wildwood Green’s general manager. “I’ve been here seven years and junior golf has always been one of our priorities.

“We are accepting of the fact that juniors are going to play golf —and we want them to play golf — but also that they are the future of golf, the customers going forward. There are some members who don’t want to see juniors out here, but we have a vast majority of members who are very accepting and are willing to make them a part of their group. It gives the junior a sense of belonging and that they deserve to be here.”

Redman, who guesstimates being a Wildwood Green regular for the past four years, says talk of junior inclusion is not lip service.

“I can’t speak for a lot of the other clubs, but I definitely think the receptiveness has to be somewhat unique,” he said. “A lot of the members are very interested in how we are doing, how we are playing. The teaching pros — John Budwine formerly and Jimmy Hamilton now — are always interested in helping us improve and it’s always nice to have that support right there.”

While Wildwood Green is celebrating its 30th anniversary, the roots to junior golf go much deeper.

In the 1950s, Ralph Lang, the club professional at Carolina Country Club, began to see the viability for another course in Raleigh. He began scouting sites and ultimately settled on a 124-acre piece of land that was located slightly west of Creedmoor Road and, at the time, was north of Raleigh’s city limits. Phone numbers in that area were listed as being in Durham, not Raleigh.

Reportedly, Indian relics and a moonshine still were found during the course’s construction and, around 1960, Lang’s Wildwood Country Club opened.

“The location kind of evolved,” Chip Watson said. “When I was going out to the old Wildwood Country Club as a kid, Strickland Road was a dirt road.”

For years, though, Wildwood hosted the North State Junior Championship, a tournament that was won by future professionals Vance Heafner, Scott Hoch and David Thore.

In the early 1980s, a real estate company bought Wildwood Country Club from the Lang family, along with additional land and shuttered the course. Roger Watson was part of a group that built Wildwood Green Golf Club on essentially the same property as the old Wildwood.

Nine holes opened in 1986, followed closely by an additional nine and by 1988 Wildwood Green was owned solely by the Watson family.

As Raleigh’s limits have crept outward over the years, Wildwood Green has benefitted. It remains Raleigh’s lone public access course in that area and the addition of Interstate 540 slightly north of the course has opened another avenue of access.

“So it’s really become a fantastic location for the number of people who live around it,” Chip Watson said.

Wildwood Green, though, has retained its small community charm.

“I actually lived right across the street as a young girl and would walk up there to play and practice,” Lewellen said. “I have very fond memories of being a member and playing my junior and amateur golf there.”

Luten recalls summer days in which he was “dropped off at 8 o’clock in the morning and picked up at 8 o’clock at night,” he said. With a few dollars in his pocket, along with whatever earnings he had made in golf games from the previous day, Luten spent the day hanging out with friends.

“The majority of the time we were on the range or around the short game area,” he said. “I can remember spending, literally, three-to-five hours in the bunker just having contests with guys.”

That was not a generational occurrence.

“It’s not uncommon to drive by there any day during the summer and see 10 to 15 kids playing crazy games in the practice bunker or on the putting green,” said Bob Gerard, Ryan’s father. “Or you will see some of the better junior players being asked to play with older members on Saturday mornings.”

Luten says he learned to hold his own in such Saturday matches where friendly wagers were the norm.

The course, originally designed by Chapel Hill resident Bob Moore and redesigned by John LaFoy in 1996, is also believed to be an influencer.

“It has always been a shot-maker’s type of course,” Chip Watson said. “You’re not going to get out there and hit driver on every hole. You’re going to have to think, ‘Where is the pin today? Where do I need to be in the fairway?’ And then the course is tight, so pace of play is a little faster, kids can get around quicker.”

Clearly little, if anything, is broken with junior golf at Wildwood Green, but that has not kept management from tinkering.

The program, Operation 36, begins by developing a player’s skills from 25 yards and in to the green. Once a player masters that distance by scoring 36 or better for nine holes, the distances increase until the player is playing from actually tee boxes.

N.C. State’s Wolfpack Golf School originated at Wildwood Green and continues to host camps there three weeks each summer. Wildwood Green also opens its course to a handful of area middle and high schools to practice and host matches.

“We are not afraid to try new and different ideas,” Hamilton said. “Juniors obviously are the future of the game, and we have to find ways to draw them and make the game fun and unique. Kids get enthused and want to learn more when they have success and see positive results.”

The club is also ripe for cultivating junior golfers not only because of its location, but also for offering affordable options. The club, for example, offers junior memberships (age 21 and under) that are available on a monthly or long-term basis.

There is also an organic “paying it forward” mentality among Wildwood Green members. Luten recalls that after his usual playing partners left Wildwood Green, he took a much younger O’Connell under his wing.

“We were Frick and Frack,” Luten said. “We’d practice and play together, and he’s so deep into my pockets that I’m embarrassed to say how much money he has won off me through the years.”

Says Redman: “Playing with (the older Seabolt and Jenkins) definitely helped elevate my game and they’re great friends, as well. We always have a great time, and it’s always easier to get better and play better when you have competition like that.”

Chip Watson does not envision the legacy ending any time soon.

“Word travels fast,” he said. “In golf, people quickly ask ‘Where do you play? Wildwood’ or ‘Who is your instructor? ‘Well, so and so from Wildwood.’ So I think we really have our name out there.”

And people are taking notice.