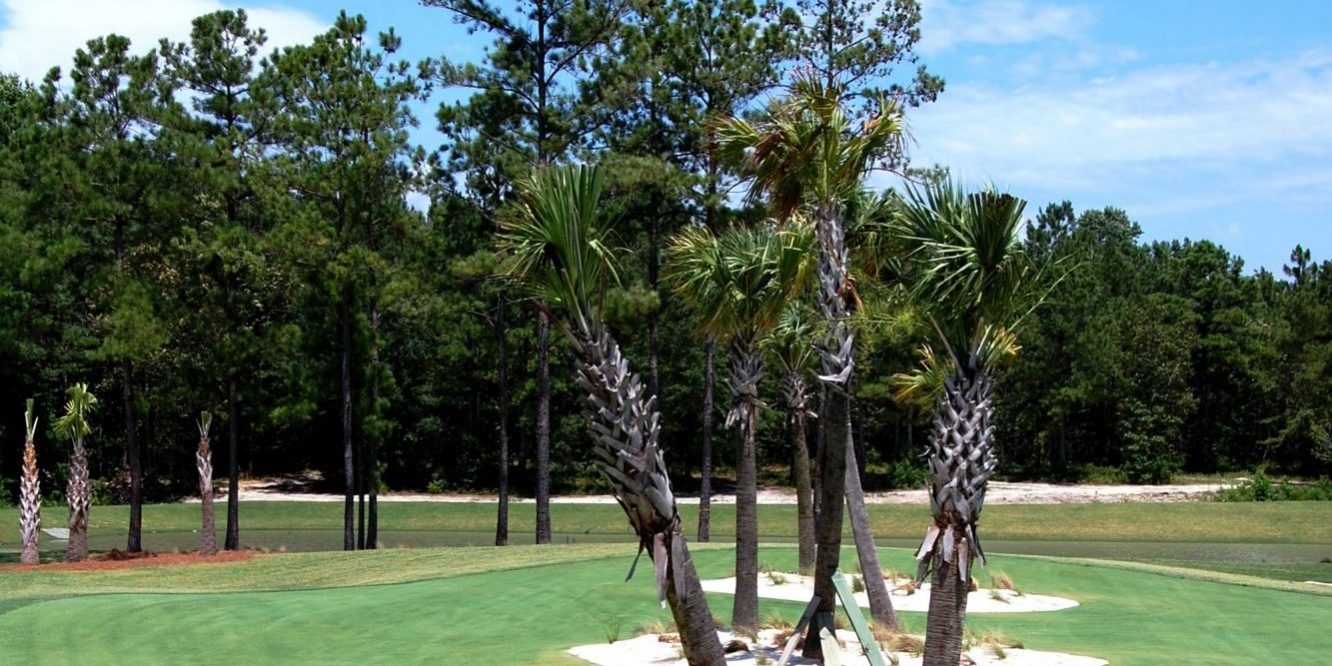 If there was any place ripe for a new golf course in North Carolina it’s the Brunswick County town of Leland.

Ten miles south of Wilmington, Leland’s population has grown from 1,938 in the year 2000 to an estimated 17,924, making it the nation’s fastest growing area in terms of percentage of population growth.

Many of those have taken up residence in the 2,300-acre development called Compass Pointe, which recently opened its 18-hole golf course designed by Cary-based architect Rick Robbins, who also has such Tar Heel layouts as Crow Creek in southern Brunswick County and Mill Creek outside of Mebane.

Robbins began the master planning of the community and golf course a decade ago, and was called back to finish the job after successful developer Bobby Harrelson purchased the property in 2011.

When Compass Pointe opened this summer it was the first new North Carolina layout in six years, or since Dormie Club in the Sandhills in 2010.

“It’s very gratifying when you finally do put it together,” said Robbins, who has designed most of his courses in the last decade in the Pacific Rim of Asia. “You think ‘Wow, I’ve stayed here with it for a long time and it has come to pass.’ It’s fun now.”

Robbins equates Harrelson jump-starting the Leland project to when SAS founder Jim Goodnight purchased Prestonwood Country Club in Cary and developed the surrounding area and offering 54-hole of golf and numerous other first-class amenities. Harrelson doesn’t offer that many holes, but is working on it with his recent purchase of nearby Magnolia Greens, which gives Compass Pointe residents access to two distinctly different layouts.

“With Bobby Harrelson the credibility was there all at once because he has such a great track record,” Robbins said. “That got things moving. He decided after about a year with sales getting better that he really wanted to start shaping the golf course again and that instantly made a difference in the rate of sales and the price. People could actually see something happening on the golf course.

“We kept tweaking the design for the real estate value and adding water that we didn’t have before. Bobby was just really, really determined that he was going to build a good product.”

Robbins designed the course with a “minimalistic feel,” letting the land dictate many of the design features, which includes wide fairways, large sandy waste areas, an assortment of wire grasses and water that comes into play on a half dozen holes.

“The design is such that is allows you to bump-and-run it up onto the green,” said Compass Pointe director of golf Rick Ferrell. “If you don’t get it there the ball will run into some swales and collection areas that are really cool — good design stuff.”

The highlight of the layout is a back-nine stretch of Nos. 13-18, which are woven into a dense conversation easement area, meaning no development will take place along this stretch of holes, giving it somewhat of a “Pinehurst feel” despite being located in a coastal county.

And you won’t be able to miss the more than 200 Palmetto palms that dot the golf course and unique 18-hole putting course that is situated behind the 18th green and in front of the proposed clubhouse location.

“We wanted to concentrate on them as a theme,” Robbins said of the palm trees. “A large bulk of the owners out here are from Pennsylvania, New York, New Jersey or Connecticut and they move down here because it feels tropical. So, these palms are hardy in this region and it gives it that kind of tropical feel. It is even in the deed restrictions that you have to have at least 3 palms in your home landscaping plan.”

The 18-hole putting course, which will be lighted once the clubhouse is built, is also adjacent to a short-game area that includes several practice holes. Robbins has also added tees on the layout for a short course that measures 1,677 yards and will used for member tournaments and twilight play.

“I’m doing par-3 tees on every hole of the golf courses I design now with the owner’s permission and most of them seem to like the idea,” Robbins said. “I did on the Fairways Course at Prestonwood and I did it on three courses in China. I think everybody is realizing we have to grow the game and where is it going to come from? It’s going to come from minorities, kids and women. This lets them get introduced to the game and let’s them actually play the game without pressure, and it gives you a lot of alternatives for fun tournaments, etc.”

The par-5, 558-yard 18th is undoubtedly one of the best closing holes along the coast. Robbins had some elevation to work with here as the tee shot is framed by a series of bunkers as the hole flows gradually downhill to a large waste area that crosses the fairway and must be negotiated by either laying up short on your second shot or trying to go for a green that then rises some 23 feet.

“It’s a great hole and then the green just tops it off,” Ferrell said of all of the contouring on the large putting surface. “A lot of people get excited when they get it on in regulation, but then fun begins.”

“I wanted to set the green into the side of that hill and make it into an amphitheater,” Robbins added. “You have to think about what you do on your second and third shots; how close do I want to get it to the wetlands? There is a lot of thought process on that hole as to how you want to play it.”

Robbins was stumped when I asked him when his last layout was opened in the United States.

The architect then did some research the night after our round and came up with an answer – Royal Lakes Golf Club at Lakewood Ranch in Sarasota, Fla., which opened in 2007.

If nothing else, Compass Pointe and Robbins get an A for perseverance and helping grow the game of golf.

“The fact of the matter is real estate still drives the train on golf courses and this one would not have opened at all had it not been for the real estate,” Robbins said. “As the real estate markets continue to be hot in different places there will be a demand for golf there to drive those values.”