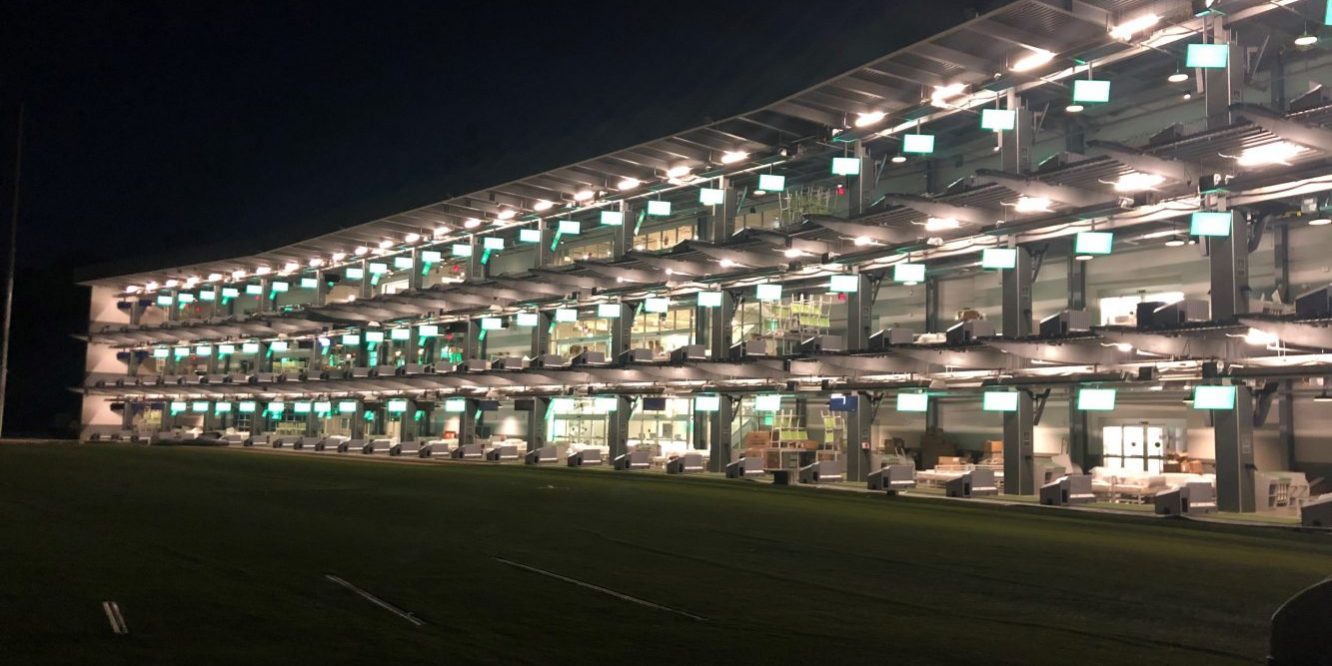 Those of us close to the golf world know our proverbial dimpled planet has been rapidly evolving, especially across North Carolina.

One of the fastest growing states with some of the nation’s most attractive places to live have driven private country clubs to provide much more than a pristine 18-hole golfing experience with lush fairways and silky smooth greens. Expansive pools with circular slides, innovative short game practice areas, tennis facilities, junior golf programs, various foodie and craft beer options – all in a more relaxed and casual family atmosphere – is now the norm, not the exception.

The game’s “driving ranges” have followed suit quickly. A large bucket of balls and a patch of green grass is no longer an attractive option for most.

So you can imagine the anticipation for the opening of Drive Shack Raleigh in the Triangle, a multi-purpose 65,000 square foot entertainment center that features 96 climate controlled hitting bays on a three-level launch pad.

Raleigh is the firm’s second location. The inaugural Drive Shack opened in Orlando a little more than a year ago. Ones are also near completion over the next few months in West Palm Beach, Fla., and Richmond, Va.

“We are going to be the premier entertainment destination in the entire Triangle and beyond,” said Drive Shack Raleigh assistant general manager John Wielgat. “The word is going to spread like wildfire. It already has. We have people coming in the parking lot every day thinking we’re open and then they see the ‘We’re Hiring’ sign and are bummed. The buzz is already out there and we’re going to continue that buzz for multiple decades.”

Drive Shack Raleigh is in the process of hiring about 400 employees at the facility located less than a mile from PNC Arena and Carter-Finley Stadium, with easy access off Interstate 40. Without traffic, residents of Alamance County can get to the location in about 30-35 minutes, with Guilford County golfers about an hour away.

All of the hitting bays (32 on each floor) are covered with heaters over the hitting pad and leather couch lounge area, and feature state-of-the-art TrackMan technology. Golfers will be able to practice their games outside of the elements or punch up a famous layout like The Old Course at St. Andrews or Bethpage Black and hit to various yardages and targets supplied on a TV screen at your individual hitting bay.

“Our technology is THE game changer,” said Drive Shack Raleigh general manager Dan Godfrey. “(TrackMan) is so realistic, so accurate; it’s a Doppler-based radar system and is going to be the first one of its kind that is going to be able to manufacture as many as 96 balls going at the same time and tracking them to make sure they work in coordination with the games.

“And the games aren’t just golf,” he added. “There are games for kids. We have a game called Monster Hunt where you are going to hit a ball towards a target and blow up a monster and save the princess. We have games for all ages and you don’t have to be a golfer to come out here.”

Once opened in late summer, as many as 2,000 patrons are expected through the facility on weekdays and as many as 3,000 on weekends. Drive Shack Raleigh plans to stay open until 2 a.m. on Friday and Saturday nights.

The second floor features a large bar with 12 beer taps – 7 of which will be local — and ample seating for food features such as flat breads, pig wings and poke bowls.

“We’ll have a lot of nice hip and trendy food offerings,” Godfrey said.

“If you can dream of it and think of it we can do it,” Wielgat said. “We can change all of the colors of the targets to blue or we can change them to all pink. That Drive Shack sign at the end of the field will be completely illuminated in bright white lights; we’ll have lighting on all the field poles as well so at nighttime it is going to be almost like a nightclub experience. We have a lot of live entertainment booked as well — DJs on the weekends, live bands, karaoke, stand-up comedians — once again, if you can think of it we can do it.”

A “round” of golf will take players about 75 minutes. Hitting bays for up to six players will be purchased by the hour, starting at $30 per hour from 9 a.m.-noon, and peaking at $50 per hour after 5 p.m. until close.

Food and beverage service, along with complimentary golf clubs for all ages are provided at each hitting bay.

“Our pay-and-play system is unique,” Wielgat said. “You can keep on extending your time if you are in the middle of a game or having the time of your life. You can continue to enjoy food and beverage and stay here as long as you want.”

Of all the places in the country for a second location, why Raleigh?

“Why not Raleigh?” Wielgat said. “Look at how golf centric this area is, and Raleigh is the fastest growing community in the United States and has been for almost a decade now. The stats show there are more than 100 people moving here to the Triangle every day, but we have something here for everyone, it’s not just a golf community. There are 3-4 major universities in the area and of course a lot of golf courses – but we’re entertainment driven. We’re all about fun. You don’t need to know anything about golf to come to Drive Shack Raleigh and have an absolute blast. We are all about the fun aspect, and hiring people with fun and dynamic personalities. We’re about people.”