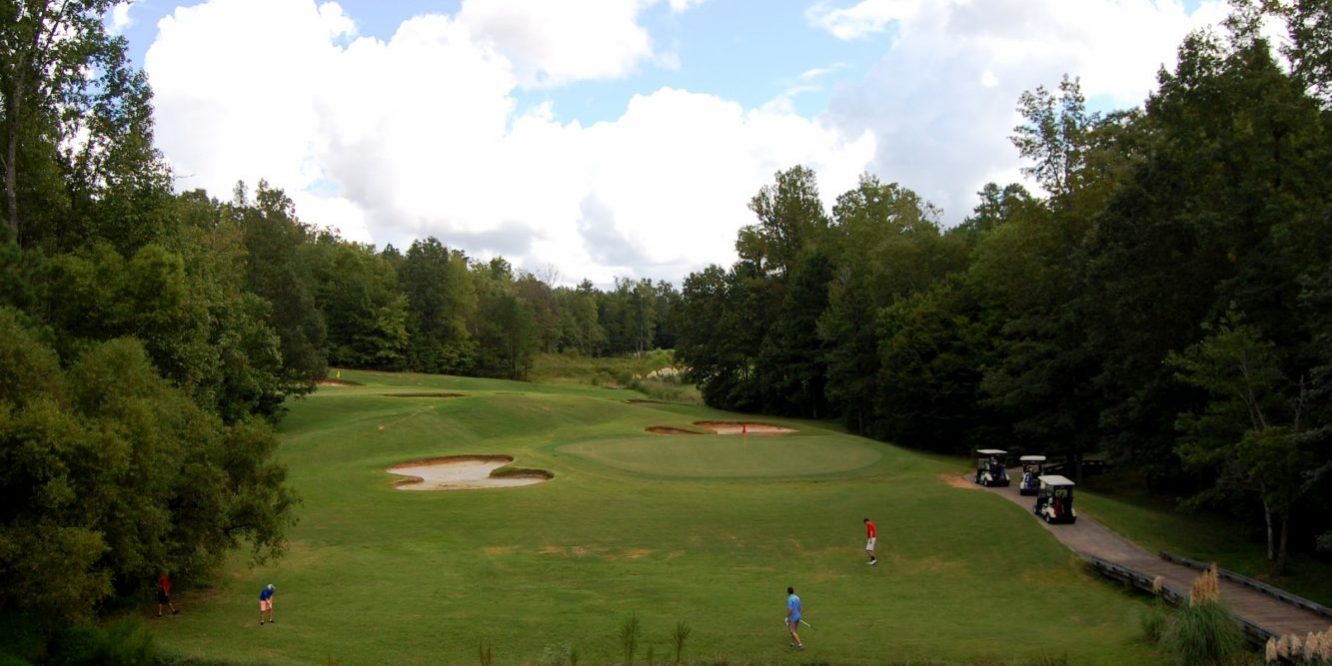 More than 90,000 cars a week now cruise past the entrance to Falls Village Golf Club north of Raleigh-Durham International Airport, something that is not lost on head professional John Montgomery.

“Our locale is just incredible,” Montgomery said as the public course carved out of prime Durham County forest along Highway 98 celebrates its 20th anniversary this year.

It may have taken two decades, but the club is now starting to take root with golfers across the Triangle, which coincides with the arrival of Arnold Palmer Golf Management in March 2018.

Montgomery was hired at that time, and he has witnessed first-hand a totally new vibe at the course.

“Our members really feel over the last year and a half that the place as really taken on a different culture and a different attitude,” said Montgomery, who worked at a private Virginia club for almost two decades before moving South to be close to his ill mother in Pinehurst. “We have a lot of staff members now that really have that ‘can-do’ attitude. It’s not just from the club level; it’s a little bit higher, too. And that has infiltrated to the members to where they can really see some good things down the road.”

“We feel very strongly about the quality of the golf course in general, and the great success it can have in the future,” said Ken Crow, regional vice president for Arnold Palmer Golf Management. “With the ownership team we’ve made significant investments in the course this year. Those are three major items we’ve stepped forward with right now.”

Rounds at Falls Village prior to the course going to temporary greens for two months during its new greens project were up 12 percent. A similar number is being seen at Chapel Ridge and The Preserve, two other Triangle-area courses managed by Arnold Palmer Golf Management.

“When we took over last year we saw the need for some better maintenance practices on a daily basis, and then worked on revenue management. Those were the two major things that we saw that needed to be improved and we feel like we’ve made significant steps in those areas,” Crow said.

Crow and Montgomery agreed that having Heritage Club developer Andy Ammons as part of the ownership team is a major plus for a course like Falls Village.

Believe it or not, Montgomery had sort of sales job with the Falls Village members when the bent greens were being killed off to make way for Bermuda greens since they were in great shape at the time.

“Once they understood some turf agronomics technical stuff we were able to explain to them that this is much needed for the long term,” Montgomery said. “We have a closely knit group of people and they really care about the place. They have seen the good, the bad and the ugly here.”

The members even continued their Wednesday evening league during the $200,000 greens project, playing one-club tournaments. Montgomery also said the project inadvertently produced more kids and families coming out and playing golf since prices were reduced to $15 on weekdays and $20 on the weekends.

“People were just coming out and having fun with the temporary greens,” he said when asked about keeping the course open during the greens project. “And we wanted the members and guests to have an opportunity to see what was going on with the project on a daily and weekly basis.”

Falls Village put in its sprigs June 25 and began play on the new greens a little more than two months later.

“It was just crazy to see the photos after 48 hours, then after a week and then 10 days and two weeks – it’s just amazing what happens,” Montgomery said.

In addition to a better playing surface most of the prime golfing season, the greens project at Falls Village had a second objective.

“We wanted to get back to the original shape of the greens,” Montgomery said. “These greens had really shrunk. For example, on the No. 14 green the difference between our sprinkler heads and the edge of the green was almost 15 feet. They should only be about 3 feet. That was pretty much all around the whole golf course.”

Not much other than increasing the size changed with the greens.

“We did look at some greens to add some variety, and we did a little soil testing but in the end we pretty much kept to the contours the same,” he said. “There were some minor areas on some greens with the Bermuda green speed that were going to be unplayable so we smoothed them out some.

“People are very excited about the greens, but then the second half of that conversation is: ‘Does that mean you’re doing the bunkers, too?’” Montgomery said.

Falls Village has 49 bunkers, and that construction funding would cost about 2 ½ times the price tag of the greens work.

“We have pinpointed approximately 20 bunkers that we’re going to bulldoze and flatten,” Montgomery said. “We’re not going to fill them in with grass, we’re just going to flatten them and make them into sort of mowed-down chipping areas.

“We are on clay here and we have flash faces in our bunkers so we need a spray liner. That is what costs so much,” he added. “But we’ve come up with the pretty good plan for the bunkers in a few stages. I would say as late as late October and early November we might see some action on that front.”

For now, green fees are $32 during the week and $45 on weekends, extremely competitive pricing for the area. “We may be able to get a little more aggressive on that front once the bunkers are redone,” Montgomery said.

“I’m often asked what time of year should you really come on out and golf in this area of North Carolina and I say August through mid November – that’s when the Bermuda is flourishing,” he said.