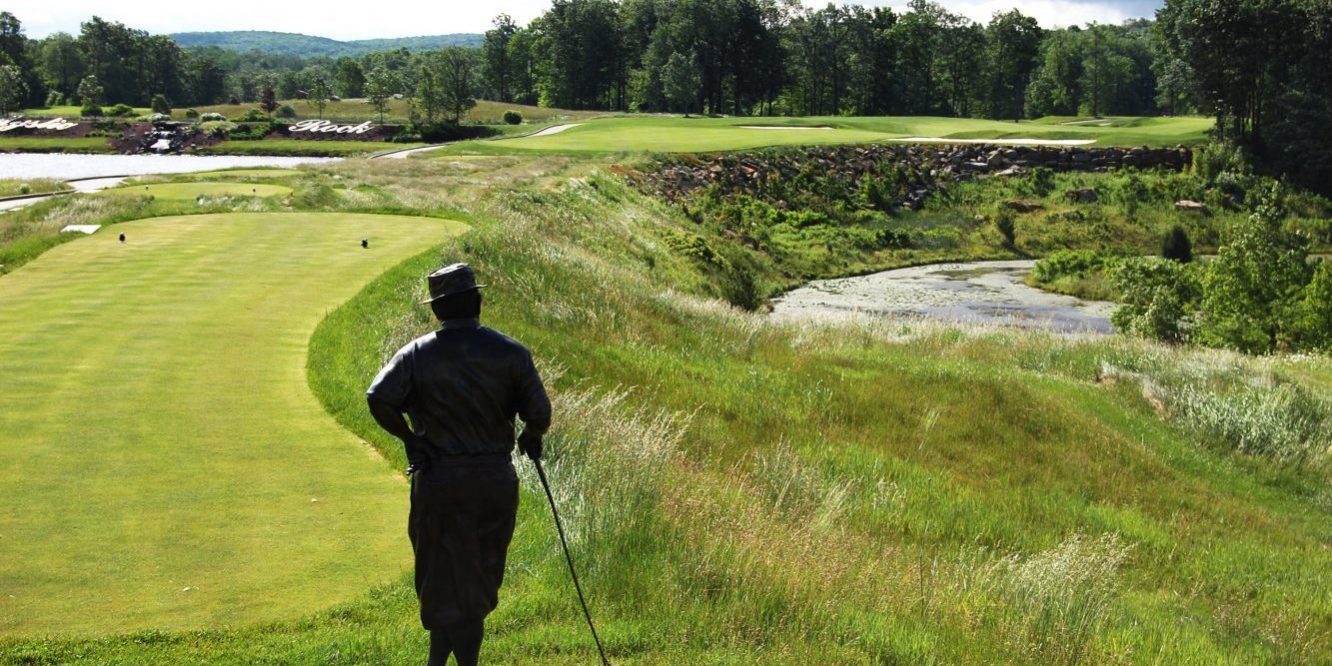 Joe Hardy turns 94 years old in January, and God willing, the founder and CEO of 84 Lumber will get to witness another remarkable accomplishment at his 2,000-acre resort in the scenic mountains of Southwestern Pennsylvania.

What’s the ageless Hardy have up his sleeve this time at one of North America’s luxury destinations?

How about another Pete Dye golf course?

In an effort to turn the resort into a golf destination, Dye’s team was asked to return to the scene of one of his best courses to reclaim land from a previous links course and design a sister layout to the 7,500-yard monster known as Mystic Rock, which was home to the PGA Tour‘s 84 Lumber Classic from 2002-2006.

Outshining Mystic Rock – with its grand landscape, boulder formations, water features, bronze statues and your typical diabolical Dye eye for the dramatic – will be some feat. Not to mention the course’s 77.0 rating and 149 slope from the championship tees. Click on the resort website’s fly-over app to get the true sense of the Mystic Rock ride.

But Hardy and Dye became good friends during the first golf project, so when the old man called the other old man (Dye turns 91 in December) took the call – and the job.

“The best case scenario is the guests are arguing about which one is the best,” said Tim Liddy, Dye’s lead architect on the project.

“The land is one of the most beautiful sites I’ve ever worked with,” added Liddy. “Views on many of the holes are 50 miles, looking out over the mountainside. There is great scenery, great topography. It will be a wonderful golf course, that’s for sure.”

Few things the Dye design team touches turn into shambles, so expect this 2017 opening to be one of the more anticipated along the East Coast.

“We’re building vertical rock walls that are more in the nature of Ireland or Scotland, more so than just scattering them around,” Liddy said. “That will provide quite an image for many of the golf holes. The course will be distinctive and have the typical Pete Dye characteristics and vocabulary — things that are very important to us that we’ll carry through to the golf course.”

Hardy is banking on the golf resort industry returning to form, so is Liddy and others in his business who have seen some lean years.

“I like to tell this story all the time,” Liddy said. “In 2009, a group of golf course architects went to Australia on an educational trip and I had lunch with Tom Fazio’s right hand man, and I’m one of Dye’s right hand men. “I said ‘do you think we’ll ever do another new golf course in the United States in our careers?’ And we both thought no way. So, it’s very, very wonderful to be building a new golf course and having clients want us to help them. I’m very appreciative.”

“Yes, some say golf is flat lining, but we really wanted to make this one of the first and last true golf destinations, not only along the East Coast, but throughout and country,” added Tim Bugas, the resort’s new director of sales & marketing. “That’s a bold move, but because of being close to Washington, D.C. and Philly, and nearby to Pittsburgh, Columbus and Cleveland, not to mention areas to the South, there are still avid golfers who will come and play two great courses.”

From 2008-2010 the economy was rough, so Hardy’s daughter concentrated on turning 84 Lumber back around before turning her attention on Nemacolin.

“It was just time to retool here,” said Bugas, who has also worked at Primland and The Greenbrier resorts. “The bottom line is she wants to be the best. To be the best you have to bring in a little more knowledge from the outside.”

Hardy and Liddy aren’t the only ones believing in Nemacolin’s golf vision. In the past few months, the resort has landed quite a twosome to run its golf operation.

Mike Jones, the resort’s new director of golf and recreation, comes to Nemacolin from Hawaii’s Kapalua Resort, one of the top golf resorts in the world. The new director of instruction, Eric Johnson, one Golf Magazine’s Top 100 teachers in America, arrived at Nemacolin just days after his former course, Oakmont Country Club, hosted the U.S. Open.

“I was at a great place in Hawaii and ran a PGA Tour event, it really was paradise, but coming here and having an opportunity to help build a new golf course and try to make this place a golf destination was just intriguing to me,” Jones said.

Prior to coming for his job interview, Jones had never heard of Mystic Rock.

“That’s one thing I asked Maggie. I told her I had heard of the 84 Lumber Classic but didn’t know what course it was at and I kind of said, ‘Why not?’ So we talked about getting it out there in the golf world more. That was the exciting part for me. If you have one place you have a golf course, but once you have two courses you have a destination and that’s what we want to make Nemacolin.”

Meanwhile, Johnson had been at Oakmont since 2005.

“It was an emotional decision to leave Oakmont, but I saw the vision here and I knew Nemacolin was serious about taking the next step when they hired Mike Jones,” Johnson said. “Once I saw the commitment to staffing of Nemacolin, that was what really changed my mind.”

The second golf course – yet to be named – plans to open in the late summer or early fall of 2017.

Nemacolin Woodlands Resort is truly a location to indulge, and is approximately 7 hours from the Triangle — well worth a long weekend trip.

OF NOTE: The resort was the location for an episode of ABC’s The Bachelorette this past season. For the viewing party, the Hardy’s trucked in thousands upon thousands of red roses and massive ice sculptures were on display for an extravagant get-together.