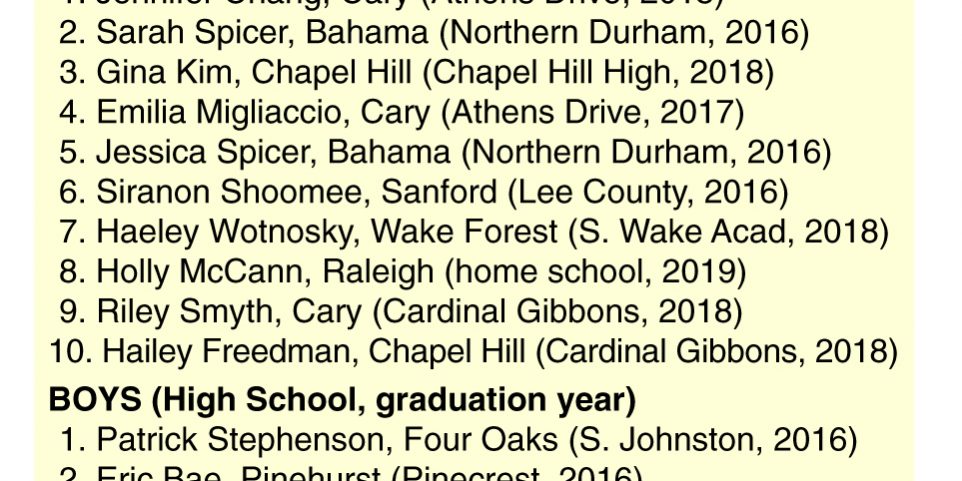 North Carolina’s juniors won bragging rights over their rivals from South
Carolina and Georgia in the 8th annual Carolinas-Georgia Junior Championship.
The event features the top 20 boys and top 10 girls from each of the three
states, and is annually played in mid-January at Mount Vintage Plantation Golf Club in
North Augusta, S.C.
A 1-2 finish in the girls division by Jennifer Chang of Morrisville and Elizabeth
Nguyen of Pinehurst, and a co-championship by Eric Bae of Raleigh in the boys division
led the North Carolina team effort that produced a 17-shot win over South Carolina.
Georgia was another 18 shots back.
The best eight boys scores are combined with the best four girls scores each day to
determine the team standings.
Chang shot 72-73 to earn medalist honors for the second straight year. She finished
eight shots ahead of Nguyen, who posted 76-79. A fifth-place finish by Jessica Spicer of
Bahama was also a key cog for the team.
Triangle-area players named first-team All-State
Eleven Triangle area players have been named first team all-state by the Tarheel
Youth Golf Association and the Carolinas Golf Association.
Patrick Stephenson of Four Oaks, Jimbo Stanley of Raleigh, and Eric Bae and A.J.
Beechler, both of Pinehurst, were named to the boys team while Jennifer Chang of Cary,
Gina Kim of Chapel Hill, Emilia Migliaccio of Cary, Siranon Shoomee of Sanford, Haeley
Wotnosky of Wake Forest and sisters Jessica and Sarah Spicer of Bahama were selected to
the girls team.
Several other Triangle players earned second and third team
honors. Walter Brinker of Sanford, Doc Redman of Raleigh, Jack Massei of
Cary were listed on the boys second team, and Brian Chen of Cary,
Ryan Gerard of Raleigh, Dalton Mauldin of Sanford and Fulton
Smith of Pinehurst were named to the third team.
Hailey Freedman of Chapel Hill, Holly McCann of Raleigh, Natalie Petersen of Holly Springs
and Riley Smith of Cary earned second team girls honors, while Samantha Bennett of Wake
Forest and Elizabeth Nguyen of Pinehurst were listed third team.
To be eligible, boys and girls must have played in a minimum of five Tarheel Youth Golf Association rankings events in 2015. The awards were determined by a combination of each player’s scoring differential and the total points earned in the rankings events.

Doc Redman and Ryan Gerard, who play out of Wildwood Green Golf Club in Raleigh, are in the exclusive 54-player field for the Junior Invitational at Sage Valley Golf Club. The event, called by some as the top junior tournament in the world, is set for April 23-25 in Graniteville, S.C.
Redman, a senior at Leesville Road High School, earned his invitation by placing in
the top 10 in last year’s Sage Valley tourney. He shot 74-77-71 to tie for 10th, 13 shots off
the pace of Marcus Kinhult of Sweden. Gerard, a junior at Ravenscroft High, was invited after winning the 2015 Polo Golf Junior Classic last November.