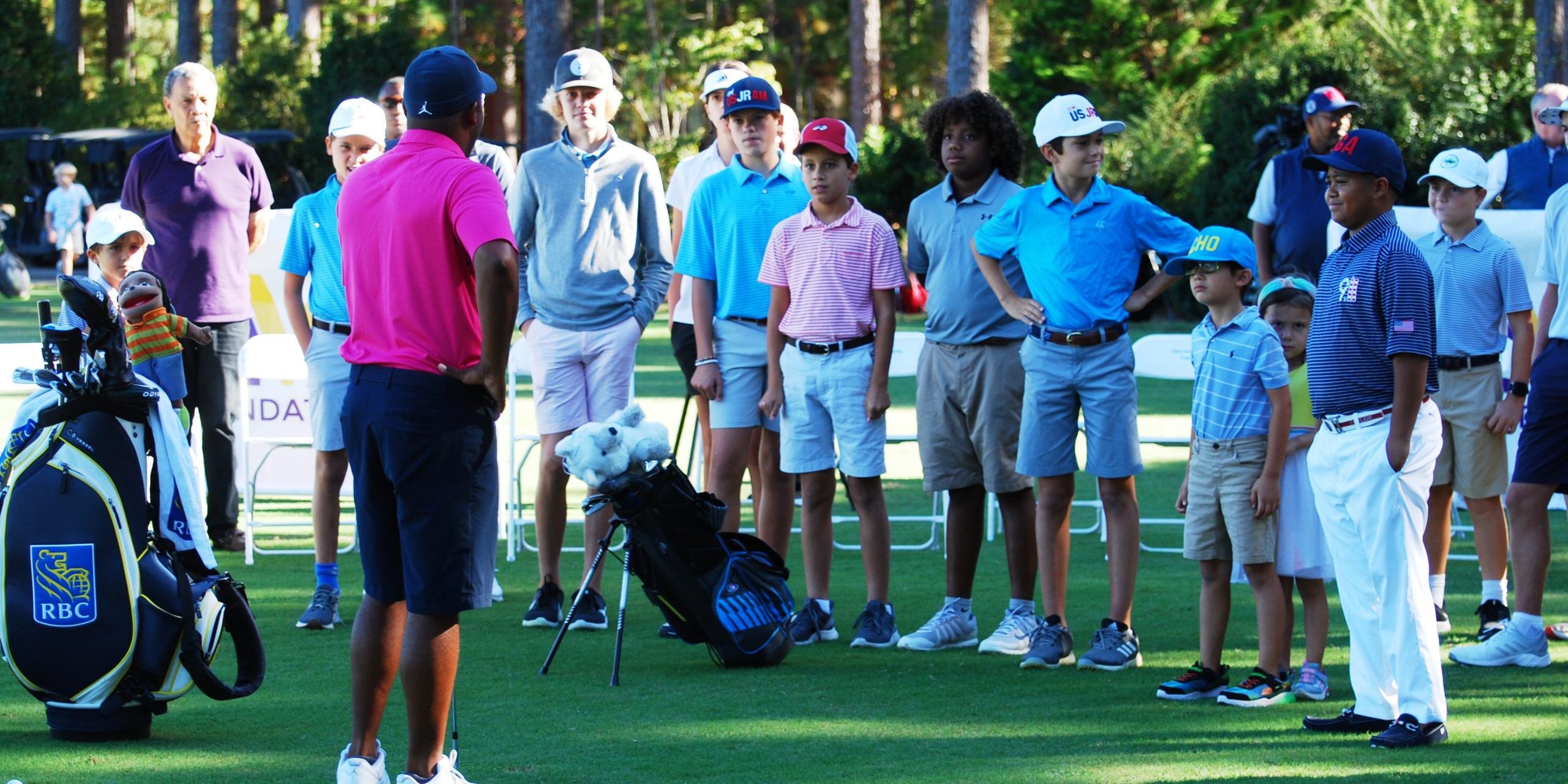 Harold Varner III has come close but has yet to win on the PGA Tour. He finished second this past season at the RBC Heritage and played in the final pairing at the 2019 PGA Championship before carding a disappointing 81.

Varner, now 31, no longer dwells on the close calls, or pays much attention to the questions about when he’ll break through on Tour.

The former East Carolina University star has played professional golf for a decade now, and he and his wife are expecting their first child in early October. And his HV3 Foundation, aimed at providing affordable sports access to today’s youth, is starting to gain momentum in the charity world.

That, more than winning, brings a smile to the face of one of the game’s most likeable and approachable players.

“Winning (on Tour) is the most important thing because if I win more people are going to know about the foundation and that means more money, and it means I’m going to be able to give more money,” Varner said during a recent youth golfing clinic at the Country Club of North Carolina in Pinehurst. “It’s a trickle down affect. If I focus on playing good golf everything else will take care of itself.

“I have been around two winners that have won a lot – MJ and Tiger – and I find it weird they don’t talk about winning,” added Varner of his friends, mega superstars Michael Jordan and Tiger Woods. “Maybe I should just focus on getting better. They are big about focusing on the present, fundamentals.”

Varner is a natural around kids. He engages them with high-fives, jokes around, and has a casual teaching approach with the hopes they fall in love with the game of golf as he did 20 years ago as a kid at Gastonia Municipal.

The goal of the HV3 Foundation is to fund close to 50,000 rounds of golf for juniors across North Carolina and South Carolina, as well as helping provide financial assistance for equipment, after school programs, instruction, camps, and various other avenues.

“Sure, it takes a lot of money, but there is a lot of money to be had and I’m willing to put my neck out there for those kids because most of them can’t do it right now,” Varner said of the affordability of sports participation in general, not just golf. “There is a lot of opportunity and I want to be a part of it. I want to change kid’s lives because one day they are going to be taking care of me.

“I remember a lot when I was a junior golfer; I learned how to respect people; I learned how to carry myself,” he added. “I saw this little kid the other day and I had flashbacks just talking to him because one little thing you do for a kid can go a long way. The biggest thing for me (with the kids) is you’re going to learn a lot by just being on the golf course.”

Varner says the HV3 Foundation has been a journey and huge learning experience that mirrors his PGA Tour career.

“I’ve had some wonderful people around me to help raise money, but more so to give me advice on how to raise money the right way so that every year we’re not trying to figure out if we have enough money to help,” Varner said. “For awhile there we were just having tournaments and basically whatever we made we gave back. Now, it’s like way over my head, but I know what (the charity) is supposed to do and I’m super excited to give kids a chance to play golf. The guys I play golf with now want to help even more — not just play golf with me. Whenever golf is out of the picture and people still want to help that’s when you know you’re winning. If the only thing you want to be a part of is me playing golf then 30 years from now it’s not going to matter.”

At 5-foot-9, Varner is small in stature, but is one of 61 PGA Tour players who averaged at least 300 yards off the tee last season. He is also one of a just a handful of black golfers playing in the professional ranks. Varner shrugs off the subject when asked.

“I never think about my race waking up,” Varner said. “But I do know how difficult it has been to get on the PGA Tour. You figure out how hard it is when the people your age aren’t playing competitive golf any more.

“Ten years from now if all you can remember is how I played then I didn’t do a good job. It’s an awesome ride and I still love playing golf. I always thought I would be able to move in silence; if I wanted to help someone I just help them because it’s the right thing to do. But it just doesn’t work that way all the time. You need to promote things (like my charity) that you want to do in life.”

To help Varner’s HV3 Foundation charity log on to https://hv3foundation.org/get-involved/.