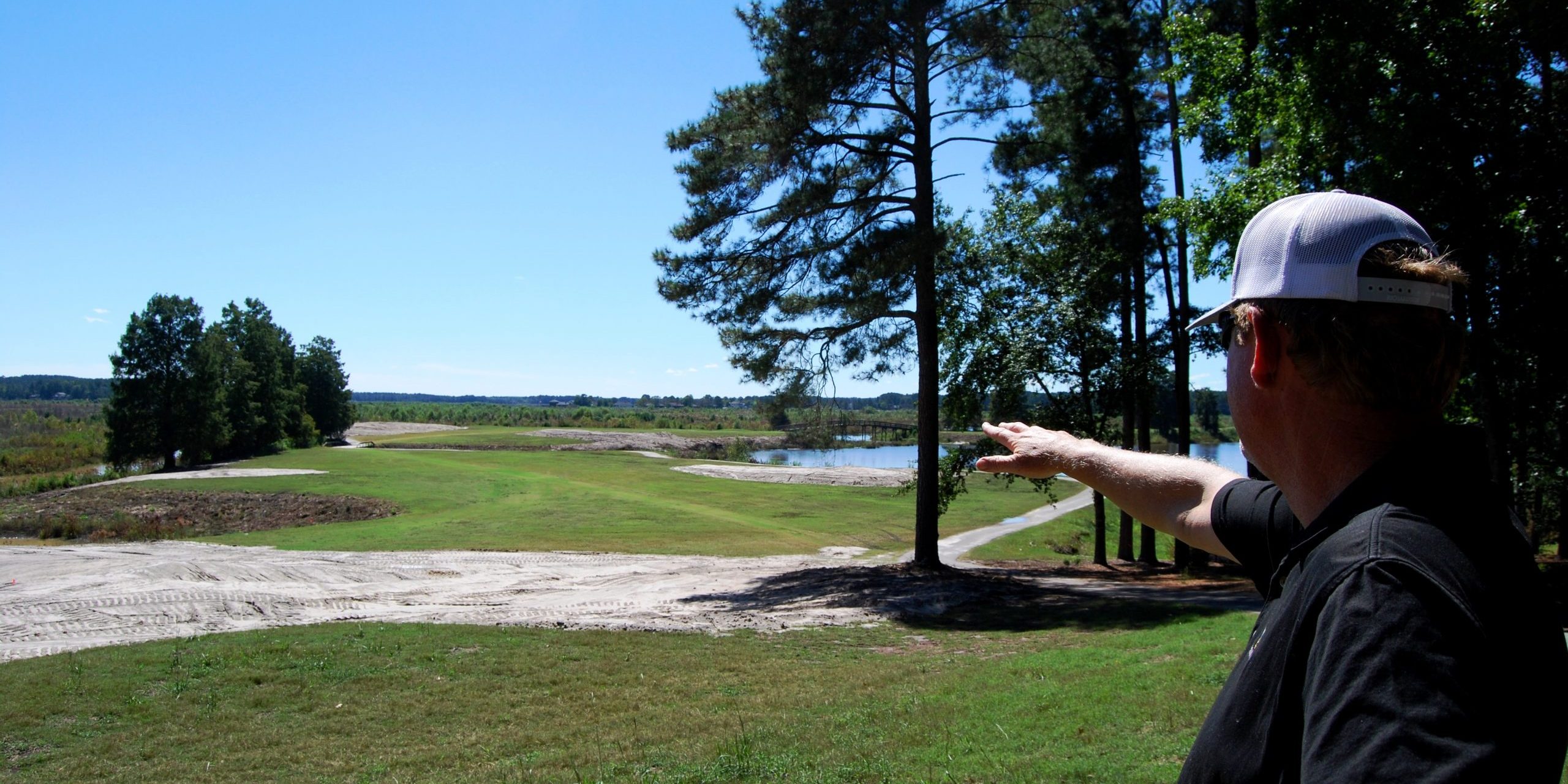 Kris Spence will stop you in your tracks if you try to label his recent work at Woodlake Country Club as an impending renovation or restoration. The Greensboro-based golf course architect has a much more fitting description of the project.

“This is a resurrection from the dead, this thing was gone,” Spence said of the 36-hole development outside of Vass, which is about 10 miles north of the golfing paradise of Pinehurst.

Spence and his crew started working here in August, in the sweltering heat of the North Carolina Sandhills, toiling hours-upon-hours bush hogging the fairways and surrounding rough just to get a peek at what was left of the 1971 Ellis Maples course that had been mothballed for several years.

Spence described the golf course as “a jungle” in which there were small pines growing out of bunkers and a “wildlife habitat” that had taken the land back over to the tune of 4-5 feet high native species and trees in most of the fairways and greens.

Spence estimates his team spent two full weeks, 40 hours a week, bush hogging the course to begin to access what was ahead of them.

“I joke that we’re going to leave those little pine trees to add a bit of difficulty to these bunkers,” Spence said. “But it really is interesting to see how nature tries to take things back over. It’s really amazing.”

To Spence’s amazement, once cut down, the fairways began to see Bermuda grass re-emerging.

“I know my first thought was we were going to have to re-sprig half of these golf holes, that there was no way the Bermuda had survived under this kind of vegetation for that long,” Spence said. “We bush hogged it and brought the sun down to the surface of the fairway, but the weed pressure was still intense. We sprayed those weeds and knocked them way back, we then had a secondary spray and fertilized it, and I mean the Bermuda came back with a vengeance. That was a very pleasant surprise. Now, we don’t have to plant 40-50 acres, which would have cost more than $100,000.”

Woodlake was a dream location for many from the retired military community of nearby Fort Bragg and other seniors with picturesque arched wooden bridges dotting the landscape filled with shimmering lakes and wetlands, accompanied by an ever-changing seasonal natural landscape. But mismanagement and numerous lawsuits over the years on various fronts left this area without its two golf courses (there is also a Palmer layout) and other amenities.

In short, Woodlake had turned into a ghost town.

The pro shop looks like the scene out of a horror movie, where folks run for cover and leave everything behind. Even though there hasn’t been a round of golf played at Woodlake in several years, scorecards remain on the counter, range balls are scattered about and the magazine Kingdom is delivered on a regular basis.

“There is no question there is a really strong feel-good element to this,” Spence said of the club’s comeback. “You see all the homeowners and property owners and old members that bought out here — that was a key part of their life — and to see it just go away must have been heartbreaking. I don’t know if they ever lost hope, but I would suspect they did. It’s great to be a part of their excitement. They are so happy to see us on site. You now, a lot of clubs aren’t that excited when you close down their country club. In this case, they are thrilled to death to be able to see a fairway re-emerging, bunkers getting cleaned up, greens being resurfaced.”

Atlantic National Capital – along with Spence – can be viewed as the club’s savior. ANC purchased the Woodlake properties earlier this year in a foreclosure auction for $3.5 million. ANC is a family-owned investment company headed by Keith Allison and his three daughters, one of which – Cara Spencer – was placed in charge of the golf course project management piece.

Spencer, who had no previous golf knowledge, admits she found Spence by “luck” after a wide search for contractors to begin work on the golf piece of the project.

“Unfortunately, Woodlake has a reputation from the past that makes it hard to get vendors to come and perform work on projects. No one wanted to be associated with Woodlake, and then the size of the job went over and beyond most of their capabilities,” Spencer recalled of the beginning stages of the project. “I expanded my search online, to Pinehurst and Raleigh with no luck, and then I talked to an irrigation firm in Charlotte who recommended Kris.”

Spencer reached out to Spence via telephone, and he agreed to come down and take a look.

“We were riding around in a golf cart and I knew nothing about golf, and I was going on a golf cart path and hitting into all these trees and he said ‘scoot over, let me drive.’ It was so funny,” Spencer said. “His wealth of knowledge and his ability to work within the confines of our budget made Kris the right person to take our vision and just run with it. I’m glad he’s here to help us.”

Spence has executed some of the state’s best golf course architectural work over the last decade, from renovations at Sedgefield to Jefferson Landing to the Country Club of North Carolina. And he has worked on about 10 Maples courses over the years.

“People would always speak very highly of Woodlake and I can see why,” Spence said. “It was probably never really taken care of the way it should have been, but in my opinion — and I’ve seen a lot of Ellis’ work — this is one of his very best golf courses. The main thing is the undulation of the property and the way he used it. The quality of the green surfaces are just really, really good; they are very diverse, just some of the concepts he used caught my eye. I was mowing the greens and I had a guy following me around with roundup and trying to kill them and green-after-green-after-green Ellis was definitely on point, trying to create a really dynamic, championship set of greens. They work up and they have these little quadrants — high quadrants, low quadrants — that just break off. Some really neat stuff.”

Spencer says the Palmer course may be used for various real estate needs along with Spence designing a unique par-3 course, similar to what Pinehurst Resort has in The Cradle.

“I don’t know what that is going to look like just yet, but it’s an interesting dynamic to what we’re doing, and is going to bring a lot of value to Woodlake,” Spencer said.

“My excitement level for this project is really high,” Spence said. “It’s exciting to bring it back to life. It’s starting to look like a golf course again. I would certainly expect it to host state and regional type of events, and it’s capable of hosting just about anything — it’s that good of a golf course.”