No small accomplishment for Smalley at Wyndham Championship 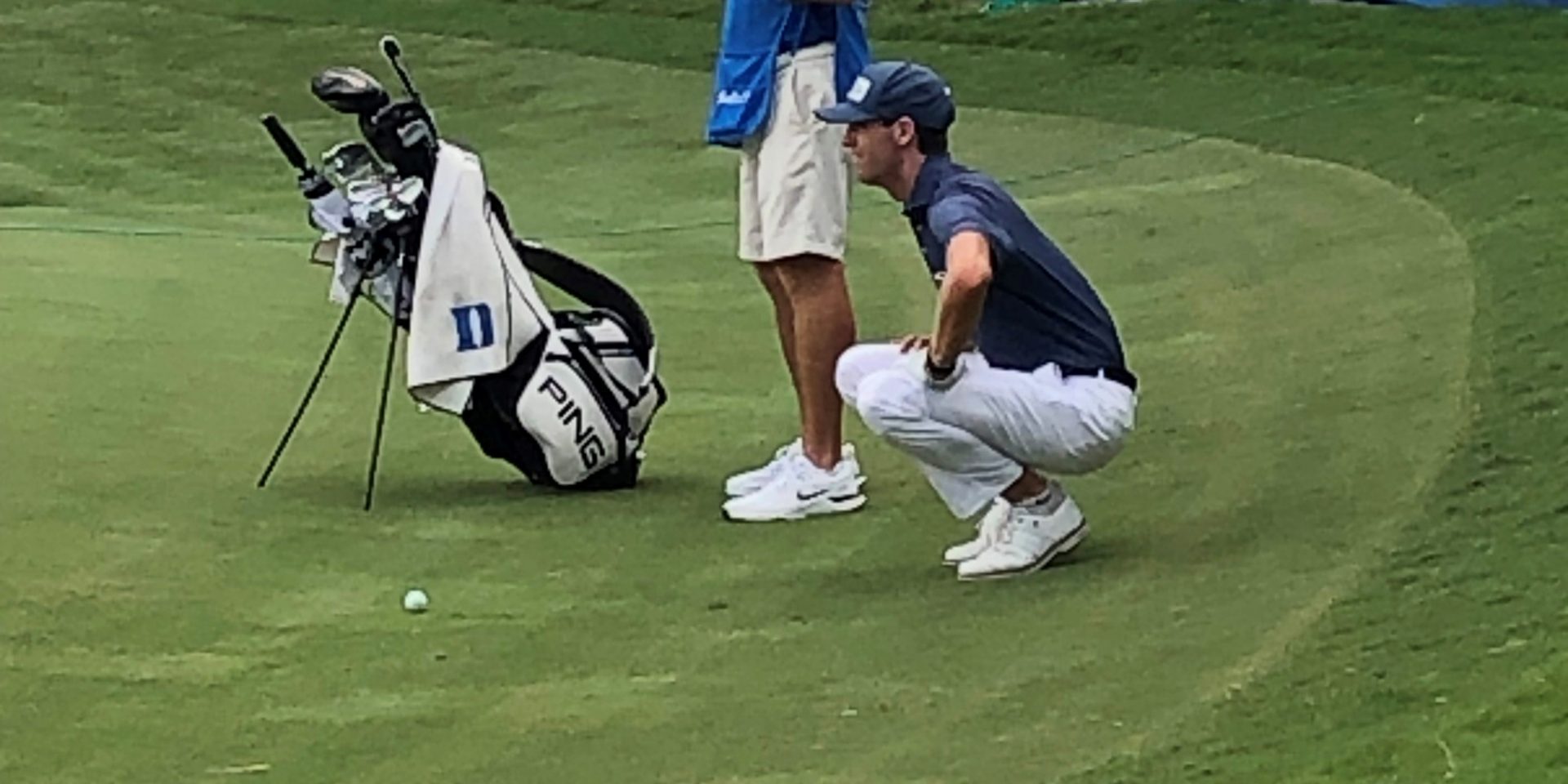 Alex Smalley didn’t quite play his way into the six-man playoff to determine the 2021 Wyndham Championship, eventually won by Kevin Kisner.

Nevertheless, the former Duke star captured plenty of attention along the way.

Playing on his home course at Sedgefield Country Club, the 24-year-old Smalley carded three rounds in the 60s, responding to the heat of Sunday’s final-round pressure in equally torrid fashion, finishing his day with three straight birdies and a 66.

In just his fifth PGA Tour event, playing on a sponsor’s exemption in a full-field event on the last weekend of the PGA Tour regular season, Smalley finished at 10-under par and tied for 29th.

His top 30 effort earned him a check for $41,013 and a spot in the Korn Ferry Tour Finals, the three-event series that determines PGA Tour eligibility for the 2021-22 season. Smalley has made the cut in all five of his PGA Tour starts, and earned enough FedExCup points to finish inside the top-200 and qualify for the first Korn Ferry playoff event in Boise, Idaho.

On Saturday morning, having secured the Wyndham cut, Smalley reserved airline tickets to fly to Boise. “I don’t know that I can put it into words,” he said. “To have the opportunity to play for a PGA Tour card in the Korn Ferry finals is huge. To have the opportunity to not have to go to Korn Ferry Q (qualifying) school is huge. I just have to go play like I know how to play.”

Smalley was born in Rochester, N.Y., but grew up outside of Raleigh in Wake Forest, competing against peers such as current PGA Tour standout Doc Redman.

His buttery smooth golf swing was built with help from instructor David Sykes at Heritage Golf Club in Wake Forest. But Smalley stopped taking lessons by the time he was 14. Throughout middle school and high school, he and his father, Terry, had a standing golf game every weekend. Terry got to know his son’s swing tendencies. “He told me what he saw and I would fix it,” Smalley said. “I haven’t really seen an instructor since then.”

His family moved to Greensboro near the end of Smalley’s high school career, and he joined Sedgefield in June of 2020 and estimates he has played 75 rounds or more on the classic Donald Ross design.

Smalley enjoyed plenty of local support during the week. Along with his father and his mother, Maria — both of whom have caddied for Smalley throughout his career — his sister, Katie, and numerous friends and playing partners from Sedgefield followed his group and rooted him on.

“It was nice to hear the cheers out there,” Smalley said. “I don’t get to play in front of a whole lot of people very often. It’s pretty cool to have people scream at you after you make a putt.”

Smalley’s grandmother, Ruby Lyons, even traveled down from Ohio to watch one of her nine grandchildren compete against some of the world’s best. “We’re small-town people and family means everything” she said.

Ruby walked with her grandson on Thursday and Saturday. “I was joking with my family,” Smalley said. “(My grandmother) didn’t walk with us in the second round on Friday and I shot 6 under, and Sunday I shot 4 under. So, I said she’s not coming out to watch anymore.”

In Sunday’s final round, Smalley said he “had the break of a lifetime on 15,” after he hit his tee shot into the weeds on the right and assumed the ball was headed out of bounds. Instead, he found it deeply buried, but in bounds.

A rules official said the ball was embedded, enabling Smalley to take a free drop on the matted part of the long grass. From there, he chipped out sideways, hit a 5-iron from 210 yards to 7 feet and made it “for an easy 4,” he said.

On the par-3 16th, Smalley knocked it to 3 feet for a kick-in birdie. Though his tee shot on No. 17 found the rough — “not the greatest place to be with where that pin was” — Smalley was able to use the green’s slope and his approach ended up 15 feet from the hole. “That putt breaks a lot,” he said. “I’ve seen that putt before and it breaks quite a bit. I snuck it in the back door.”

After his drive on Sedgefield’s finishing hole found the fairway, Smalley hit it close again. “I told my caddie walking up 18 I wanted to get it to double digits,” he said. “I couldn’t have dreamt of a better finish.”

Smalley knows how to go low. During an all-state high school career, he once shot 60 in the junior club championship at Heritage GC. The Duke University 2019 first-team All-American and Ben Hogan Award semifinalist also shot 61 at the 2018 Louisville Cardinal Challenge.

Smalley was a four-year letterman at Duke and the 2019 ACC Men’s Golf Scholar Athlete of the Year, graduating with a 3.6 GPA studying environmental science. He left as one of Duke’s most decorated players ever, holding the best career scoring average, the best single-season scoring average, the most top-5 finishes and the most sub-70 rounds in school history.

At the 2016 U.S. Amateur, Smalley finished one shot back of the all-time scoring record during the stroke-play portion, capturing medalist honors by shooting 65-68. He also qualified for the 2017 U.S. Open at Erin Hills in Wisconsin.

In 2018 and 2019, he became the first player since Rickie Fowler to win back-to-back Sunnehanna Amateurs, and later he was a member of both the 2019 U.S. Arnold Palmer Cup team and the Walker Cup team, registering a 3-1-0 record in each event.

More recently, Smalley posted back-to-back finishes in the top five on the Forme Tour, an eight-event circuit providing U.S.-based players a route to the Korn Ferry Tour qualifying tournament, while the PGA Tour Canada has been off limits due to COVID-19 restrictions.

Wyndham Championship tournament director Mark Brazil said he regularly sees Smalley practicing at the club and was happy to give him one of the sponsor’s exemptions. “He’s got some real game — a great young man. I was excited about giving him a spot,” Brazil said.

For Smalley, finishing strong in a PGA Tour event on his home course was a dream come true.

Afterward, he took to Twitter to sum up the experience: “Wow, what a week! It’s tough to put into words how much this past week meant to me. Playing in front of a home crowd was incredible. I will be forever grateful to @WyndhamChamp for giving me this opportunity. Time to get back to work the next 3 weeks at the Korn Ferry Finals!”