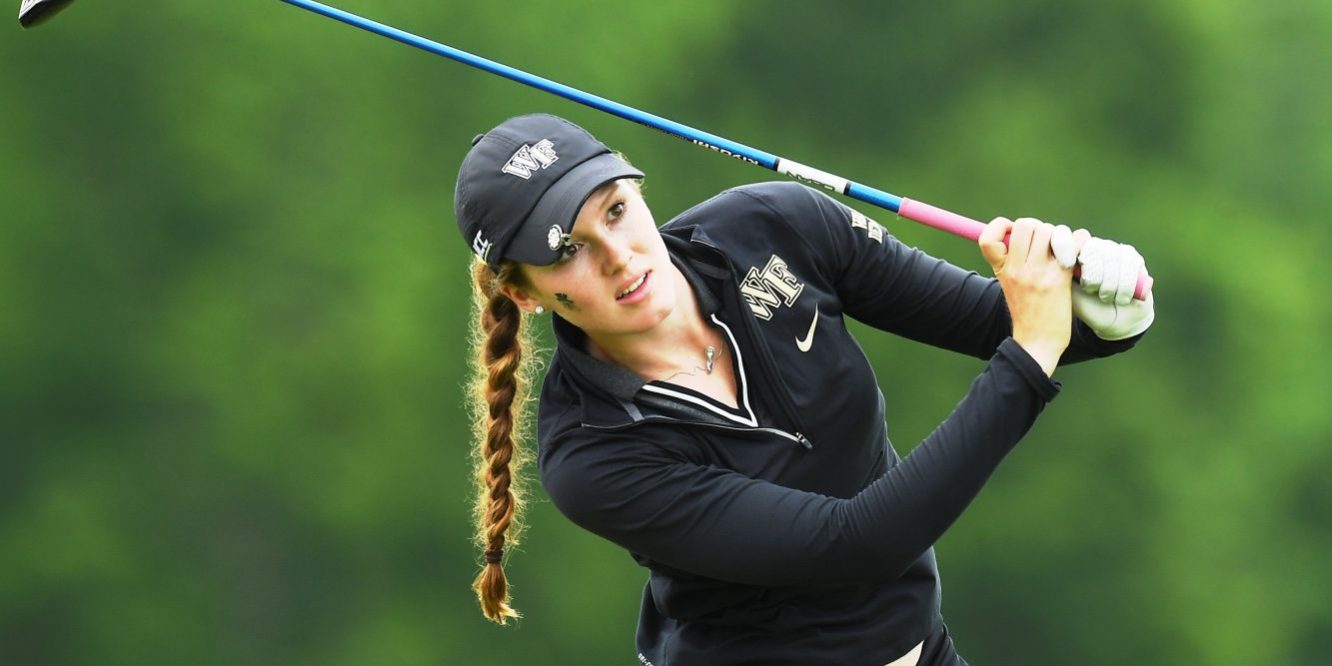 For as far back as Emilia Migliaccio can remember, Jennifer Chang and Gina Kim were part of her own golf story.

“I was still slicing my drives and sculling my chips at the time,” Migliaccio says with a laugh. “I had just started golf and they were a lot better than I was at 10. As we got better, we were kind of the top three girls. I knew I had to beat both of them to win the tournament.”

For nearly a decade, the three girls were the brightest lights on the North Carolina junior golf scene, making names for themselves in ever-broadening circles. Today, the three young women are still linked by their success on the course, but their impact on the game has reached new heights. Each is a 2018-19 NCAA All-America selection and ranked among the top 25 amateur golfers in the world. Migliaccio, a junior at Wake Forest University, is ranked 8th; Chang, a junior at University of Southern California is 13th; Kim, a sophomore at Duke University, is 22nd.

“It’s kind of crazy to me, actually, three girls in the Triangle area,” Chang says. “It’s not that common.”

For the past decade, they have played friendly rounds, fought for tournament titles and represented their country. Through it all, they’ve had each other’s backs.

“I’m fortunate to have people like Jennifer and Emilia,” Kim says. “It’s hard enough to find real good competition in your area, but also to have them as your friends. Being able to relate to them on the difficulties of having to travel, having to manage your life as college student-athletes, it’s just a blessing I’ve been given. I get to see them and how they handle pressure and learn from them.”

Migliaccio and Chang both graduated from Athens Drive High School and live in Cary, while Kim lives in Chapel Hill. Now, between college commitments and summer tournament schedules, the friendships are mostly fostered on the road, where all three women share a clear priority.

“Everyone is out there to win,” Chang says. “You’re friends off the golf course, but you’re not friends on the golf course. But we always support each other. When someone wins a tournament, we’re always like, ‘Great playing, you deserve it.’ So obviously, full-on support for both girls.”

Even during tournaments, walking the line between competitors and friends isn’t difficult.

“When you’re on the course, you want to win the tournament,” Migliaccio says. “But at the end of the day, if someone plays better, you’re just happy for them. We’re all supporting each other, while also being very competitive. But it’s not like a personal thing. Just play good golf and see what happens.”

Sometimes that creates some heart-pounding drama. At the NCAA Women’s Team Championship in May, Wake Forest and Duke met in the final, where Migliaccio faced Kim in match play. With their match tied after 17 holes, Migliaccio put her 156-yard approach shot within a foot of the cup to win the match 1-up.

“I’ve played against Emilia before, so I knew how good she was,” Kim says. “Emilia played her heart out for her team. Even though I lost and felt disappointed because I couldn’t get the point for my team, I still had positive feelings because I knew we still had a chance to win as a team. I told told Emilia, ‘Great, great match. It was really fun playing with you.’”

A few weeks after Duke earned a national championship with a 3-2 win, Migliaccio signed up for a no-stress round at Duke University Golf Club. When Kim saw her name, she joined her.

So is the reality that the young women are rivals. They climbed past one another on tournament leaderboards over the summer, and their highly-ranked schools will meet again, too. As Migliaccio and Kim learned in the NCAA final, team competition only raises the stakes.

“As much as I love Emilia and the close bonds we’ve created, I consider my team as part of my family at this point,” Kim said.

The three women share one dream that may not be too far in the future. All three hope to play professionally on the LPGA Tour. Chang has taken the first steps, playing in the first stage of qualifying school in August.

“We’ve known each other so long,” Chang says. “If we could continue our dream and play on the LPGA Tour with each other … that would be a really neat experience.”

In the meantime, they’ve made it all the way to adulthood, supplying a blend of competition and friendship that has paid off for each of them.

“I’m proud of them, and we’re all proud of each other,” Migliaccio says. “It’s great to have people so close. We can all push each other to get to the top. It’s pretty awesome.”

Chang, Kim and Migliaccio know each other’s game well. So we asked them, “What do you admire about the other two players when they are on the golf course?”

On Emilia: “Definitely her demeanor. She’s the one that everyone gets along with. She’s very outgoing. You look forward to playing with Emilia anytime you’re paired with her in a tournament. She has a lot of respect for the game and she works really hard to be where she’s at right now.”

On Gina: ‘She’s one of the hardest-working players I’ve ever met. When I’m out practicing, she’s probably practicing even longer. She’s such a great putter. When I see her putt, I think, I want to putt like Gina.”

Jennifer: “Her course management is amazing. It blows my mind how consistent she can play. Even if she is having a bad day, you won’t be able to tell because she controls herself so well. She knows how to reduce mistakes and stay calm and keep fighting.”

Emilia: “I love her distance control with any shot inside 100 yards. For pitch shots and wedge shots, she’s so consistent and deadly accurate. For match play, when you need those wedge shots to put some pressure on your opponent, she’s very, very good at that. It’s one of the reasons she’s so good in match play.”

Jennifer: “She has really good ball striking. She always has a one-yard draw. It’s a perfect, straight shot every time and she’s very consistent. Also, her wedges are very good.”

Gina: “When we played partners at Junior Ryder Cup, she was so locked in the zone. She was like, ‘Emilia, we’ve got this!’ I feel like her mental strength is really, really good.”