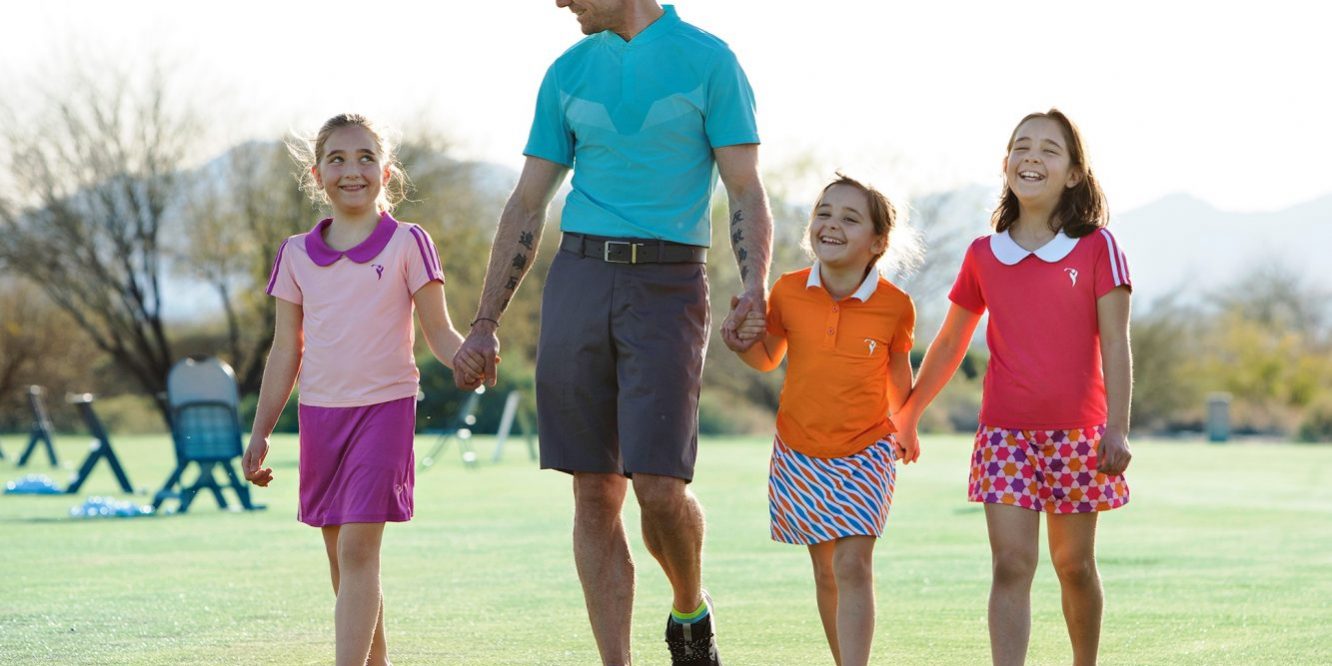 Three years ago, Scott Petinga — a cancer survivor and, at the time, a divorced father of three young girls — decided to take up golf as a healthy outlet to spend quality time with his family.

“I wanted to make sure the time I spent with my daughters was well served, so we all decided to take golf lessons,” Petinga said. “I love the aspect where, when you’re on the course, we abandon technology and just live for the now. It’s a great time to stimulate conversation and get to know each other.”
Petinga said one of the biggest obstacles he faced immediately was finding clothes that fit his daughters’ individual personalities, plus were appropriate for the links.

“There’s a certain way that golfers need to dress and look,” he said. “When you walk into the big box (stores) of the world, they truly abandoned the young adult category — that junior category from 4 to 12 years old,” he said. “We struggled to find clothes.”

Being an entrepreneur — or a “serial-preneur” as Petinga describes himself, having launched more than a dozen companies and three charitable foundations — he decided with his daughters’ assistance to create an entire, affordable line of clothes. The company would also include a philanthropic element to help Petinga impart some life lessons on his children.

For four months, the family designed and redesigned an entire collection of junior golf clothing in hundreds of styles and colors. More time was devoted to fittings, all with an end goal of achieving a hip, fun and colorful assortment of apparel for boys and girls ages 4-12 that would make a “bold but subtle statement out on the course.”

“I would sneak into school at lunch time so the girls could try on samples,” Petinga said with a chuckle.

Fifty percent of wynnr’s profits are donated towards providing young people from underserved and underrepresented communities with access to superior educational opportunities. In addition, wynnr is a gold partner of The First Tee and will donate a minimum of $25,000 in the next several years to help the organization fund its youth-focused programs at golf courses, elementary schools and other education centers.

“It’s a children’s brand, it should help other children,” Petinga said. “Right now, we’re only on-line. It is a global, e-commerce solution, so we can ship anywhere in the world.”

The wynnr mantra is a powerful, positive message to send to young people: ‘You have the heart of a warrior. Nothing about you is ordinary. You celebrate victories and learn from losses. You ask no favors and strive to be the very best. Wear the clothes that do the same.”
“To me, it’s not about us making money because we essentially are just breaking even,” Petinga said. “It’s about the monumental impact we can have on society.”

Now 46, Petinga was diagnosed with stage 1 testicular cancer in 2004, when he was a 31-year-old newlywed. He found himself in the operating room within a week and eventually underwent nearly a dozen rounds of radiation. The U.S. Marine turned into a 120-pound skeleton of his former self.

“Everyone said (testicular cancer) was the best kind of cancer you can get, since it had a survivor rate of 99 percent. But I wound up with every possible side effect known as well as a few ailments that are not,” said Petinga. “My world came crashing down.”

Testicular is the most common cancer in men between the ages of 15 and 40. Almost 10,000 men get diagnosed every year. “I am trying to promote monthly self exams,” Petinga said. “Every woman, once she reaches puberty knows she needs to conduct a self exam, yet we’re not teaching our young men that it’s equally important.”

After radiation left him unable to have children, Petinga’s intent was to use his annual bonus to fund invitro fertilization. Yet, his company decided not to give bonuses that year. “The only thing I ever wanted to be was a dad, so I was devastated that the opportunity quickly slipped through my fingers like sand,” he said. “We desperately needed the $25,000 to at least begin the invitro process.”

Deep in medical debt and despondent about his circumstance, Petinga quit his job and launched his flagship marketing agency — the data-driven communications agency AKQURACY — to solve marketing problems that he felt desperately needed solutions. “I found a void that other agencies weren’t doing and it just took off and did really, really well,” he said.

Within five years, AKQURACY earned a spot on Inc. Magazine’s prestigious list of “Fastest-Growing Private Companies.” Petinga went on to be selected to join the Young Entrepreneur Council (YEC) – an invite comprised of the world’s most successful young entrepreneurs – plus he was a semi-finalist for Entrepreneur magazine’s “Entrepreneur of the Year” Award.

During the past decade, Petinga has engaged in ventures that have changed the world for the better and redefined the meaning of success for all businesses. “I have, and take pride in disrupting every industry I enter,” he said. “Every one of these start-ups benefits some form of charity or greater social change.”

Through his humanitarian organization called, “TH!NK DIFFERENT Foundation,” Petinga recently donated $500,000 to the University of Minnesota for men’s cancer survivorship research. In addition, he has collaborated on and funded several clinical trials with the University of Southern California’s Norris Comprehensive Cancer Center, one of which is to better understand testicular cancer’s impact on male testosterone levels after treatment.

Passionate about serving the community, Petinga has also founded the Fairy Foundation, the Center of Advocacy for Cancer of the Testes International (CACTI), and serves as a volunteer mentor with Imerman Angels of Chicago.

Petinga gives motivational speeches and has written a book titled: “No One Ever Drowned in Sweat: G.R.I.T. — The Stuff of Leaders and Champions”

“My book is about G.R.I.T. — guts, resilience, initiative and tenacity,” he said. “People like myself, Scott Hamilton, Elon Musk, Sir Richard Branson — we all have it. The main reason I decided to write the book was that if I’m not here to tell my story to my daughters, I want them to understand that you can achieve anything in life. It’s all about working hard, persevering and never giving up.”

“We take our health for granted,” he added. “Essentially battling cancer and the aftermath the last 15 years, I’m grateful to wake up every day. People forget that. Be happy that you get to experience the day, because so many people don’t have that opportunity. So, for the ability to kiss my wife good morning and hold my kids, I mean, that’s all I ask for.

In remission from cancer for 13 years now, Petinga said his health issues transformed him into a new man with a vibrant, renewed appreciation for his family and loved ones.

“I’m in and out of medical facilities every eight to 10 weeks for treatment,” he said. “It’s hard not to think about your legacy. A lot of the drive that I have, it’s so my kids can be proud of me when I’m no longer here. That’s what drives me to always put in 110 percent, no matter how horrible I feel.”